Been having a issue with this for about a year, and I can not figure it out ( well I think I have but I need more advice ) this normally happens only during gaming.. So here is the specs of my rig first

Now, this has started since day one of owning this board ( the board was the first that was bought so keep this in mind ) under certain loads mostly gaming the system literally shuts down with the CPU FAILED debug light on, normally the only way to get the system to recover is by shutting it down and rebooting the system.. Well its been awhile since this has happened and I thought maybe this had corrected itself, but I was wrong. Today I decided to play Vermintide II with a friend first game no issues, second game is when it happened but this time different then before. I powered it down by turning off the power supply, waited 5 minutes turned the power supply back on hit the power button and my RGB light on the CPU cooler barely lit up nothing else came on. I checked the power supply not hot by any means no weird smells as if anything has burned up.. after 5 minutes of messing with it. It finally powered back up. So I went into event viewer and I recieved a critical like I normally do of ( in this order ) this was recieved 15 times before the critical error (Error) Kernel-EventTracing 2,(Critical) Kernal-Power 41 (63)

All drivers are update including the BIOS, is this a motherboard issue or something else ?

What are the CPU temps under load?
J

citay said:
What are the CPU temps under load?
Click to expand...

Can you test for general stability? Get Linpack Xtreme: https://www.techpowerup.com/download/linpack-xtreme/

Run Linpack Xtreme, select 2 (Stress test), 5 (10 GB), set 10 times, press Y to use all threads, then 2x N, and let it do its thing.
It's the best tool to detect CPU (and a bit of RAM) instability, reacts even quicker than Prime95. Warning, this generates a lot of heat, so keep an eye on your CPU temps.
Each run lasts a few minutes, and after each time it has to say PASS, ten times in a row.
J

Just did that test, and no issue's all passed..


Correction for some reason after this test my system hangs a bit on a reboot, the GPU debug light stays lit up for about 2 minutes before I get the MSI logo screen... And if I try to enter bios its extremely lagged, windows doesn't seem to be effected just BIOS... So is this a board issue ?
Last edited: Jun 18, 2021

Could still be anything at this point. Did you check the CPU temps while running that test? What did they go up to?

It's even better if you could run this during the test: https://www.fosshub.com/HWiNFO.html

Open the "sensors" window and after a couple of Linpack runs, make a screenshot of that where you can see all the voltages, temps and fan RPMs. This should give some clues.

Also, a photo of the inside of your case might be helpful, to see how it's set up.
J

Ok will try that when I get home but a update

Last night during all the laggy bios issues i decided to turn the system completely off. In doing so it would not turn back on i would hear a click my light on the AIO pump would flash on then fade out after about 10 minutes it finally turned on but with no lag

At this point, even though you have a powerful PSU, i would test it with a different good PSU, just to exclude some rare problem with yours. It's no good to spend hours testing all kinds of stuff when it could possibly also be the PSU, which is easy to test. But the laggy BIOS sure sounds more like a motherboard/CPU issue...
J

Test has been ran again here are the screens of HWinFO.. During the test I was hearing small pops coming from what I do believe was the PSU ( about 2 of them during the first 3 to 5 minutes .. But I felt around it and nothing was hot its luke warm at best... also picture of build, I tried maybe cleaning it thinking it was dust or dirt shorting something out

I think i may have found your problem. Since you're permanently running your system on a test bench with a water cooler, your VRM gets zero airflow, which leads to VRM overheating and shutoff initiated by the mainboard. This is my best guess. 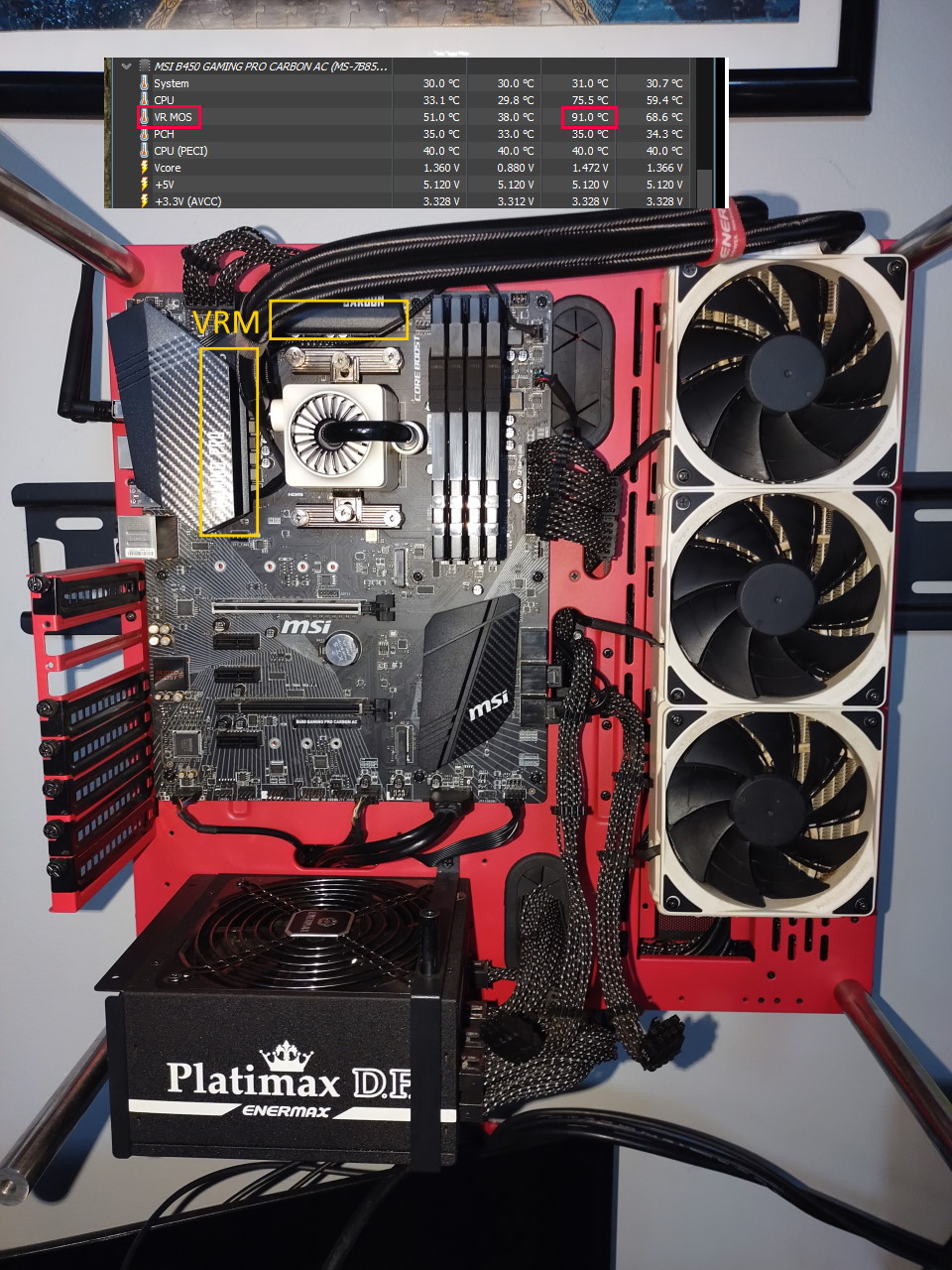 The 2700X is rather hot-headed too, you're pushing around 150A through your VRM, but it's a simple solution using seperate MOSFETs, which can get quite hot. And those 91°C are only the sensor temps, on the PCB it can be hotter.

You have a 4+2-phase VRM, using twice the amount of chokes and MOSFETs (8x 4C029N Hi-side- and 8x 4C024N Lo-side-MOSFETs for the CPU). So this was before the B550 boards where they went with Powerstages for the better board models.

What is the technical difference of seperate MOSFETs vs. Powerstages? Here are some explanations, https://www.gigabyte.com/MicroSite/312/images/PowIRstage.html

Basically, seperate MOSFETs have considerably higher switching losses, so you get way more heat from the VRM. Each time one of the MOSFETs switches on and off, you have energy turned into heat, and it's way more heat than with a single powerstage which combines the components.

Due to the inefficiency, the switching losses and the low phase count of the MOSFET solution, this current going through the VRM leads to a lot of heat being generated there. Simply said, you should put this system into a tower case with a well-defined airflow through the case, and/or implement some dedicated VRM cooling in the form of a fan blowing at/over it.
J

I was noticing that on the VRM but before I went with the Thermaltake P3 Case I had everything in a DeepCool Case with 3 fans directly on the VRM still the same issue also at one point the case was about 2 foot away from a A/C unit same problem still persist.

joshg300zx said:
All of these settings are stock no overclock no nothing even Voltages is stock
Click to expand...

AUTO not works well ,,.1.5V is extreme stress for VR
but wait until someone who has AMD writes .,,.,. I have knowledge only for INTEL

Do you have a good method to reproduce your problems? Then it's easy to test, just point a high-powered fan to the VRM section and see if the reported temps under load are lower. It has to stay way below 90°C. If the temps don't stay markedly lower with the VRM fan, then maybe the contact between heatsinks and MOSFETs is bad. So the board will still have VRM overheating despite the heatsinks getting airflow, because the PCB still heats up too much.
J

Ok will give that a shot but again I had 3 fans on the chipset and it still did this.. But also there is another person on here with the exact same issue he even posted a youtube video...

Also if that is the case why wouldnt it have tripped on the stress test
Last edited: Jun 19, 2021

Sometimes these things are hard to reproduce, the components have to "heat-soak" enough to reach the tripping point, if it's really an overtemperature shutdown on the VRM, which i don't know for sure.

As i said, if the fan(s) achieve nothing, then it's possible that the heatsinks don't have good contact to the MOSFETs. See the thread i linked above, there's that exact phenomenon on the Z390 ACE,

I have since gone to a Z590 with Powerstages in the VRM, but not because of any problems, the Z390 ACE ran fine for me. But it was an example where the heatsinks didn't do their job too well for some reason. They can't even be called heatsinks, proper heatsinks would have lots of fins to increase the surface area with the air. What MSI put on the Z390 ACE and on your board are blocks of metal that can soak up short bursts of high heat output, simply because it takes energy to heat them up. But once they're saturated with heat, they are not maximally effective because of the relatively small surface area, they are just basic heatspreaders then.

These are the VRM heatsinks of my Z590 board: 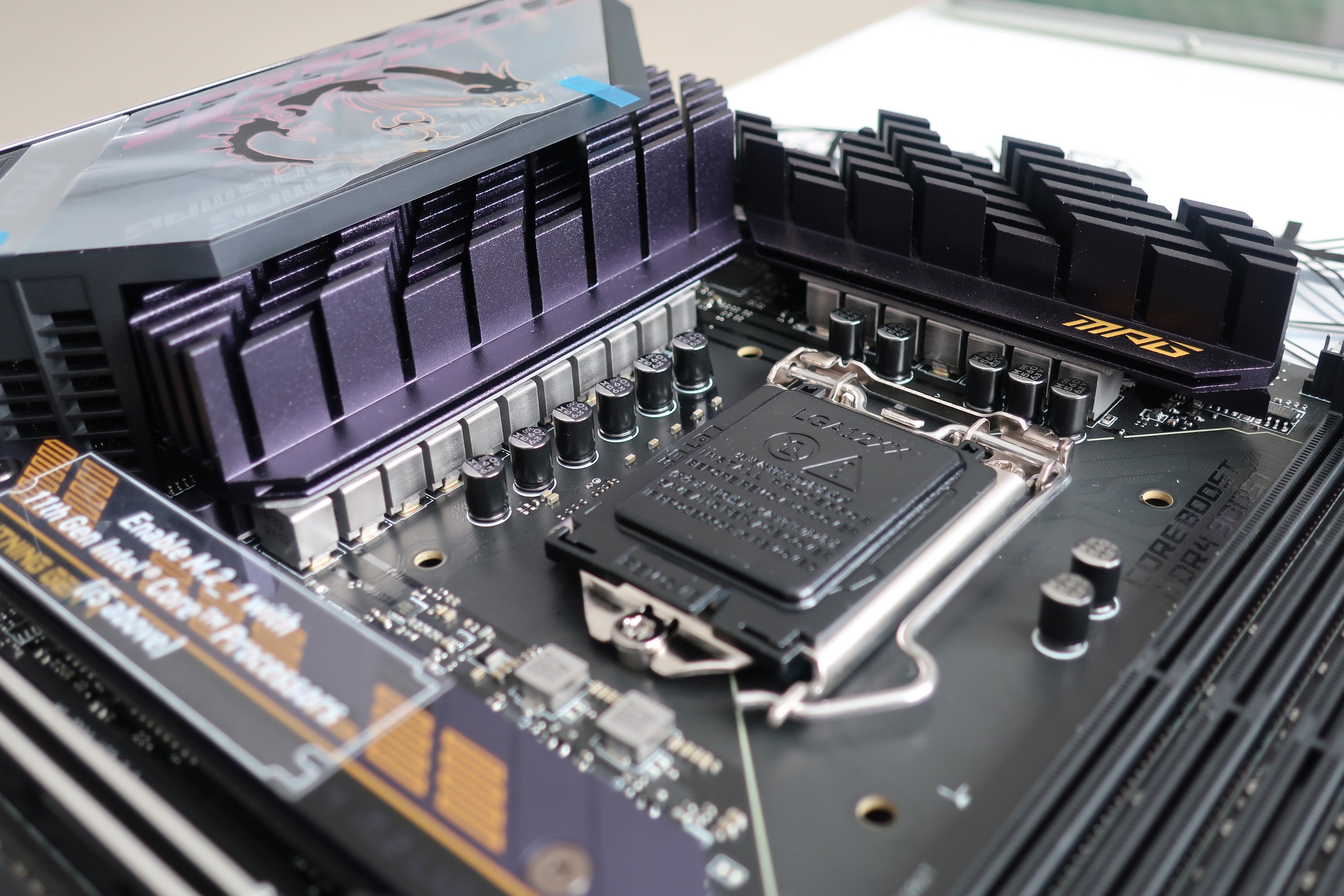 Much better with the fins, only the I/O cover plastic covers a bit of it for optical/RGB purposes, which isn't ideal.

Back in the day they once had great VRM heatsink designs already, such as this from 2008: 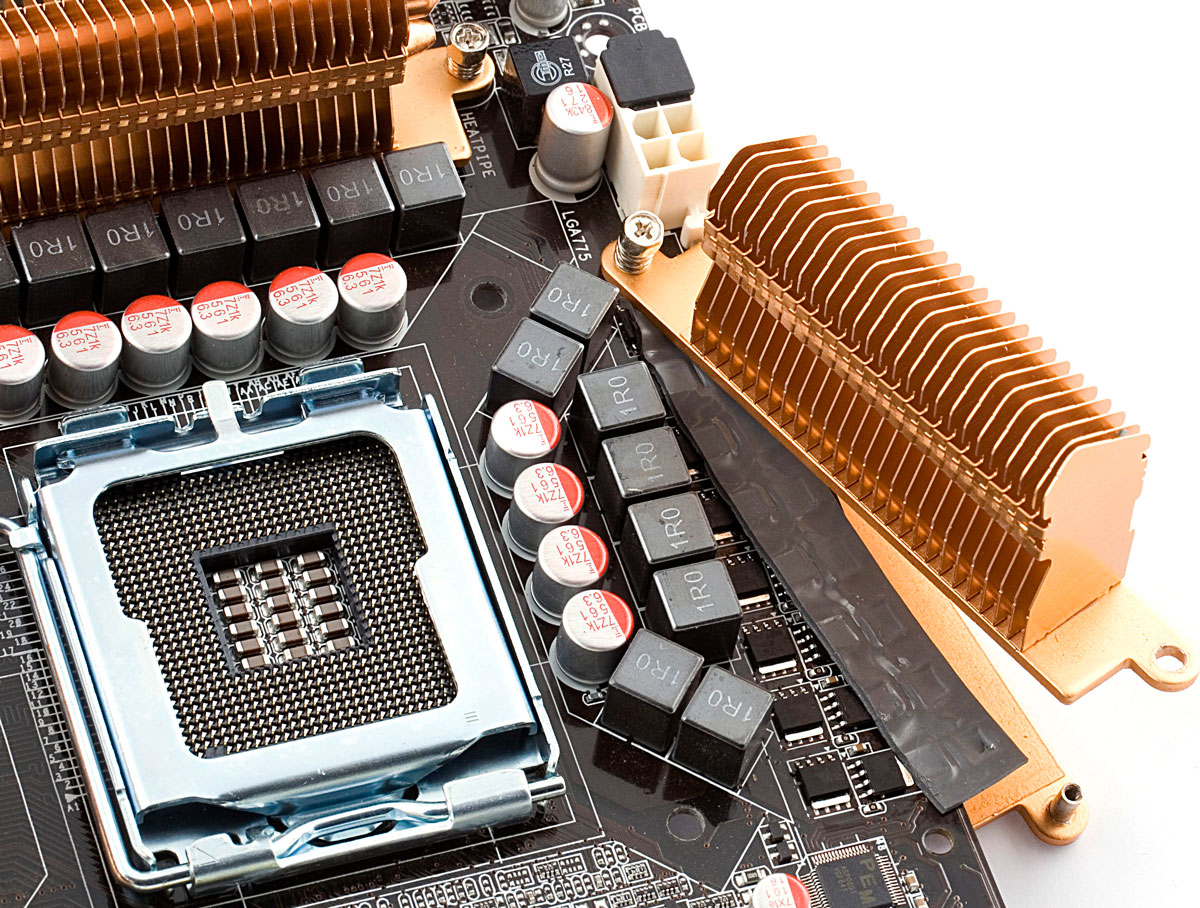 I mean, look at those stacked fins. Then the heatsinks became more and more useless for long time, because they had some temperature headroom, and they went more for good-looking visuals with flat surfaces and big plastic covers. But now, as both AMD and Intel are pushing their CPUs to new power consumption heights, they had to become a bit more performance-oriented again.
J

Test 2 after increasing the number of tests to 20 with a fan blowing on the VRM chips.. Still no crash, and I attempted to play Vermintide II again with my friend we ran the same exact 2 maps and a extra one while in the game VRM stayed at max 50 didn't climb any further then that...

Also I was just catching up on some of my Jayz2Cents vids, and he was talking about something called OCP ( Over Current Protection ) he made the comment that it could shutdown the system and also NOT allow it to come back on.. I maybe grasping at straws but how would I check for that ?

Also another bit of info that might mean nothing, but IF I play around with any settings weather its GPU or for crying out loud turn on GAME MODE in the bios its even worse, same if I try to use a Riser cable to mount my GPU vertically I can get it about 60% of the time which is my I never use it anymore.

Yeah, if a protection trips, there will be a delay for when it releases again. I think it comes from the mainboard, otherwise the laggy BIOS can't be explained. But one thing that caught my eye on your last screenshot, your PSU has a weak voltage regulation stability at +12V for being a 1200W unit. 11.808V min and 12.096V max, that's quite loose.

I looked it up and it's a multi-rail design. Can you check how you connected the cables?

Do you have 12V1 and V2 connected, then CPU and one peripheral on 12V3, and GPU on 12V4? That would be the best way to split the load. But it's not very convincing to me how the voltage varies that much on a 1200W unit, i'm used to more tight regulation from Seasonic units.

Your VRM temps are definitely up there, the fan doesn't seem to do much, probably the problem certain MSI boards have of bad heatsink contact to the hot VRM components.
And of course, on this board, they used the cheap seperate MOSFETs which get hot anyways.
Share:
Facebook Twitter Reddit Pinterest Tumblr WhatsApp Email Link
Top