hi, i have this mobo MS-7B17 mpg z390 gaming pro carbon. Since I bought it I have constant reboots, bsod and sudden shutdowns. It seem happend when I play AAA games. it only happens to me in AAA video games like shadow of war, need for speed, red death redemption, etc. I ran every stress test that I know and no crashes (furmark, occt, etc) but when I play it holds a minute and turns off suddenly or sometimes a reboot as if nothing had happened. The same thing always happens, I can't play for more than a minute. The temps seems well with HWiNFO64 but always crashes. In other videogames less agressives with the system like civilizationV or DOSBox games no problem. I have tried many settings in bios (with overclocking, without it, default options, some internet recommendations, bios updates, memory frequencies since default until 4400, "memory try it", nothing to do) and it gives me error (sorry for my english, any mistake is the translator's fault, lol)
this is my configuration:
Intel Core i9-9900K
MSI MPG Z390 GAMING PRO CARBON (MS-7B17) bios update 11/15/2021 1.c2 (I installed it before yesterday)
bank 1/channelA-DIMM1: G.Skill F4-4400c 19-8GTZKK
bank 3/channelB-DIMM1: G.Skill F4-4400c 19-8GTZKK mode Dual-Channel
GIGABYTE RTX 2080 Ti GAMING OC (GV-N208TGAMING OC-11GC)
Enermax Saberay USB 3.0 RGB (https://www.pccomponentes.com/enermax-saberay-usb-30-rgb-cristal-templado-negro)
Intenso 5TB 3.5" Sata 3 (https://www.pccomponentes.com/intenso-5tb-35-sata-3)
Thermaltake Water 3.0 Riing LED RGB 360
Samsung SSD 970 EVO NVMe PCI-E M.2 1 TB
Thermaltake Toughpower Grand RGB 750W 80 Plus Gold Modular

I have read in some forum of problems with the vrm, and to place a fan right in front of the vrm, is this truth?
reedit: hwinfo64 logs

So let's recapitulate. You have sudden shut-offs/reboots in demanding games, but not in less demanding ones. When you load the GPU exclusive by using Furmark for example, you have no crashes. BIOS settings don't seem to affect it. To me, this points to some kind of a power supply issue at first glance.

If we look at your GPU, the 2080 Ti is known to draw around 275-300W in games, with short peaks of up to 400W. Your CPU (including VRM losses from the mainboard) should draw around 200W max (with AVX closer to 300W), as long as you don't overclock it (which is pretty much useless with the 9900K anyway, small performance increase, but huge increase in power consumption).

On paper, your PSU should still handle all of that. But sudden turning off - with no temperature issues of the CPU, VRM (MOS sensor) or GPU in HWinfo64 - would be most likely caused by the PSU itself. I say most likely, of course there can be other reasons. But the first thing i would try here is a different PSU. Maybe you can borrow one for a short test. It should have at least 750W as well.

P.S. Why is your RAM seemingly in slot 1 and 3? It should go in slot 2 and 4, counted from the left. See RAM explained: Why two modules are better than four / single- vs. dual-rank / stability testing
C

thank you for your interest, citay. I dont konw why the ram was in slot 1 and 3, I paid for it to be mounted

Well, they did it wrong. It needs to go in the second and forth slot from the left, because your motherboard uses a "daisy-chain" RAM slot layout. With this layout, putting them in 1+3 and leaving 2+4 empty is equivalent to having some loose wires at the end of all the contacts of the RAM. It worsens the signal quality.

The correct order is even printed directly on the board: 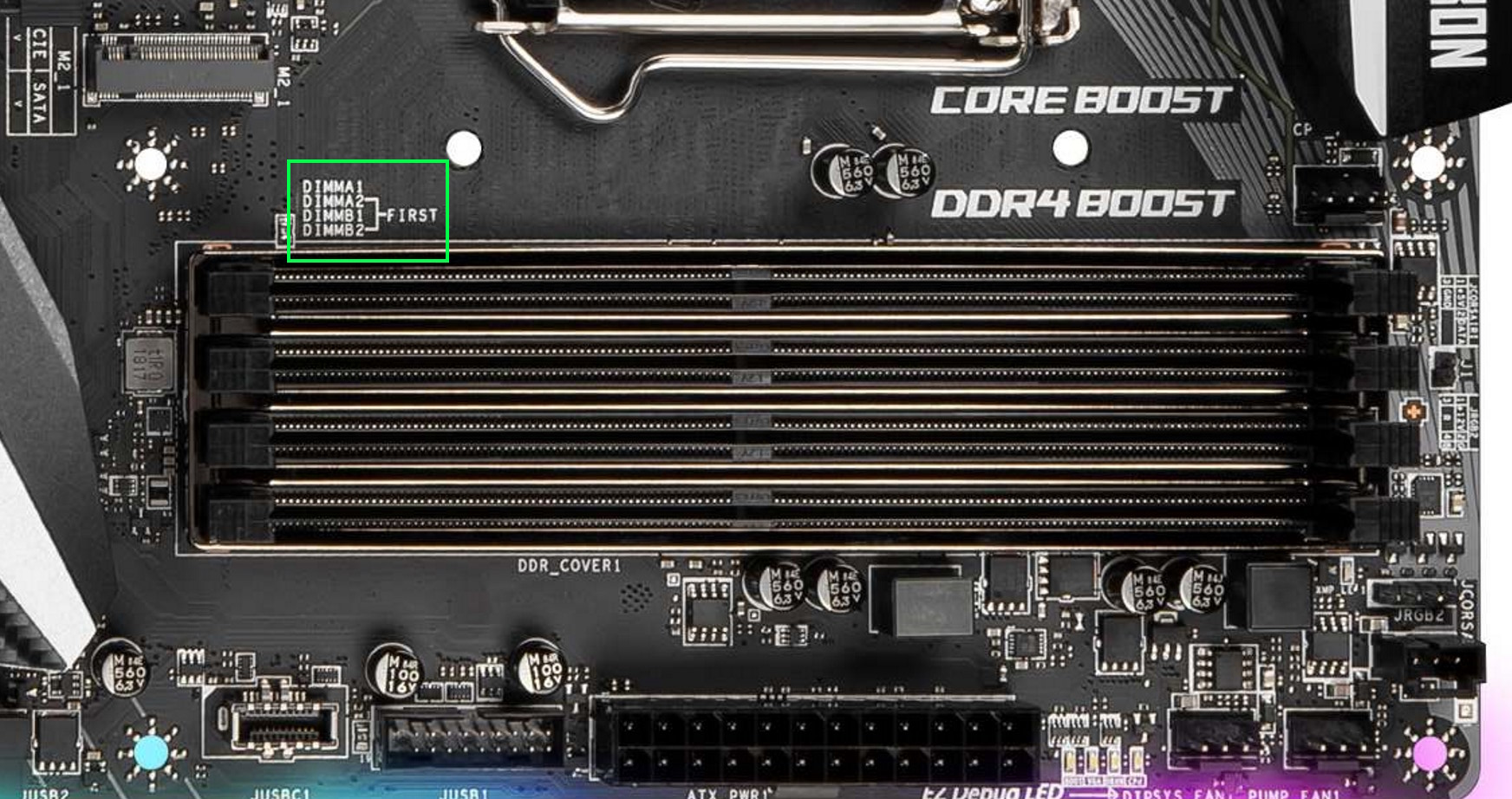 Anyway. I think your problem may be caused when GPU and CPU are loaded simultaneously to a high degree. That could be the reason why you don't notice it in less demanding games or GPU-only stress tests. With such problems, i would first try to exclude the PSU as the culprit, by testing with a different (good) PSU.

By the way, instead of the HWinfo logs, can you make a screenshot of HWinfo64 "Sensors" with all sensors expanded (click on the little <--> arrows on the bottom)? Preferably let it run a bit while in idle, so you get some "minimum" baselines for the values. Then produce full load and make a screenshot after the temperatures have stabilized at the highest level. The logs are much harder to read than having a screenshot.

You have a good PSU gets high marks Do you have separate 8 PIN VGA connectors for each of the GPU 8 Pin plugs no piggyback plugs used and are all power connectors for the board used and inserted correctly. Both the 24 pin as well as the 8 pin and 4 pin CPU
As it does sound like something is tripping you PSU power protection but it should be able to handle that load quite easily unless you got unlucky and got a faulty one.
C

citay said:
By the way, instead of the HWinfo logs, can you make a screenshot of HWinfo64 "Sensors" with all sensors expanded (click on the little <--> arrows on the bottom)? Preferably let it run a bit while in idle, so you get some "minimum" baselines for the values. Then produce full load and make a screenshot after the temperatures have stabilized at the highest level. The logs are much harder to read than having a screenshot.
Click to expand...

there it go. between the two screeshots a shut-off trying to accelerate the system

Since it records the minimum and maximum values, you don't need seperate screenshots for idle and load, but let's look what we have here. Your graphics card pulls around 300W as expected. Your CPU is doing almost nothing, 43W package power, just two cores loaded and the others are chilling. So for CPU and MOSFET temps, this is not very informative with such a low CPU load, it's no wonder the temps are quite low here. I would have to see that with full CPU load.

Your 12V rail dips a bit under load, but this high 11.xxV is still within spec. Your graphics card gets a bit hot under the collar, but high-end graphics cards are known to get that hot, and furthermore, if they reach a certain temperature limit, they would just throttle themselves. So on the surface, there is nothing too alarming in the sensor data. But obviously you still get the problem.

My recommendation is still the same: First, try to exclude the PSU as the culprit. Test with another 750W or better PSU (different model), at least 80 PLUS Gold certified to ensure a certain quality. Once you have done that, you have either found the culprit (if it doesn't happen with the new PSU), or you have at least excluded it and can test something else.

Same a citay only thing I can think of is you PSU is sensitive to the GPU over power spikes that can hit up to 3x the normal power draw for a Microsecond most PSU handle it without a problem but sometimes you get one that is to sensitive and triggers the Overload protection to quickly.
Share:
Facebook Twitter Reddit Pinterest Tumblr WhatsApp Email Link
Top