Confused by the PL1 Tao on z490 Gaming Edge

New to these turbo boost chips and pretty confused by what I'm seeing in HWINFO -
I'm trying to optimize bios settings for daily usage / power efficiency so that I get the turbo boost, but have it expire correctly -- and don't burn high watts all day.

I can't tell if the board is actually obeying the 125w PL1 (56 second) I've set, since cores seem to be constantly bouncing between 4.7 and down to 800Mhz with basically no loads.
I'm seeing clocks on some cores in hwinfo up to 5Ghz (assuming I'm missing any higher peaks due to slow polling).

I've got the PL2 set to the stock 229w limit, all speed step/c-state stuff is enabled. It's hard for me to believe that most cores at 4.7 isn't above well 125w -- is this treated as an average?
Anyone got any tips for running this board closer to intel stock?
J

edit: All the gaming mode stuff is off // bios and DC.
B

Why you would to run at 4.7 GHz all cores only for a few seconds ¿

Any brand of motherboards are made for running it at unlimited time or up to 100ºC and not just for few seconds like intel specs say. Forget about that.
You dont paid for a beast CPU that will downclock at 3.8 GHz.

Just let the bios at default enable XMP and enjoy that beast dude.

You are not answering his question, BenchAndGames

For the 10700K, the Intel power limits are not as limiting yet (unless you run stresstests or very long benchmarks). Only the 10900K is quite limited by them, but that one is an actual beast, the power consumption is enormous without the limits. Your board's VRM and your cooling better be excellent if you disable the limits with a 10900K.

The 10700K has a PL1 of 125W, PL2 of 229W and Tau of 56 seconds (Tau = Greek letter T stands for the time period in physics). These limits work quite well with this CPU's power draw. On the 10900K for example, the 250W PL2 is limiting, and the PL1 even more so, because that CPU can continuously draw over 300W if you let it (and overwhelm almost all air coolers and some AIO water coolers).

joshuaemerso153e02de said:
I can't tell if the board is actually obeying the 125w PL1 (56 second) I've set, since cores seem to be constantly bouncing between 4.7 and down to 800Mhz with basically no loads.
I'm seeing clocks on some cores in hwinfo up to 5Ghz (assuming I'm missing any higher peaks due to slow polling).
Click to expand... 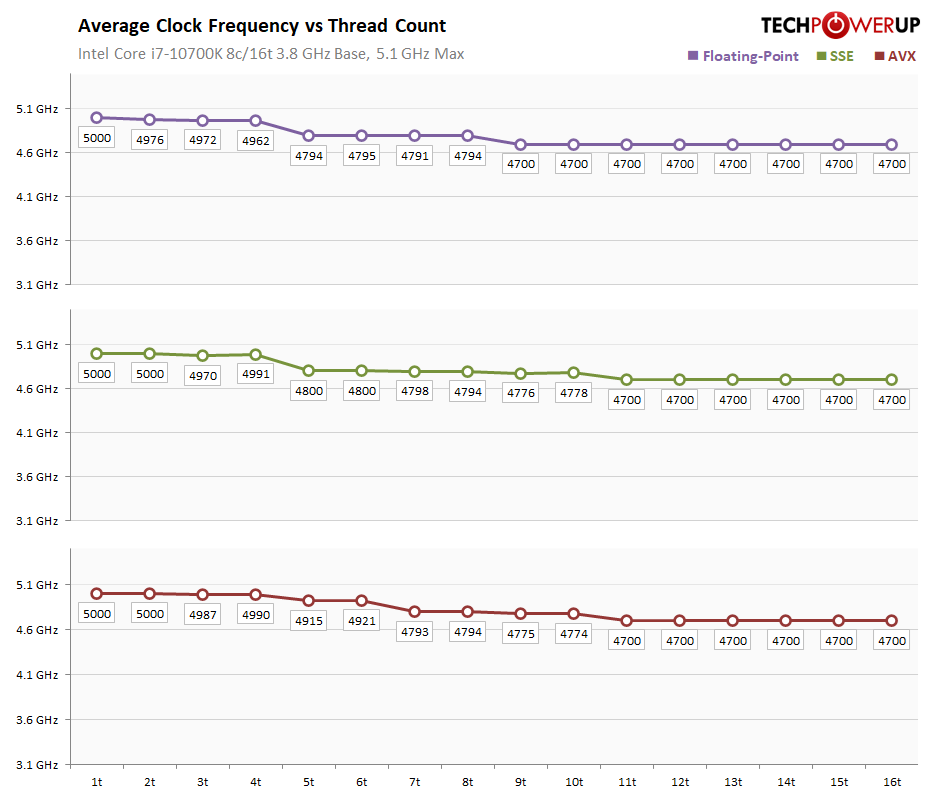 But don't look so much at the boost frequencies, look at the reported CPU power consumption. There you will see for sure if the limits are working or not.
Either use HWinfo64, or what i like to use is Core Temp: https://www.alcpu.com/CoreTemp/ 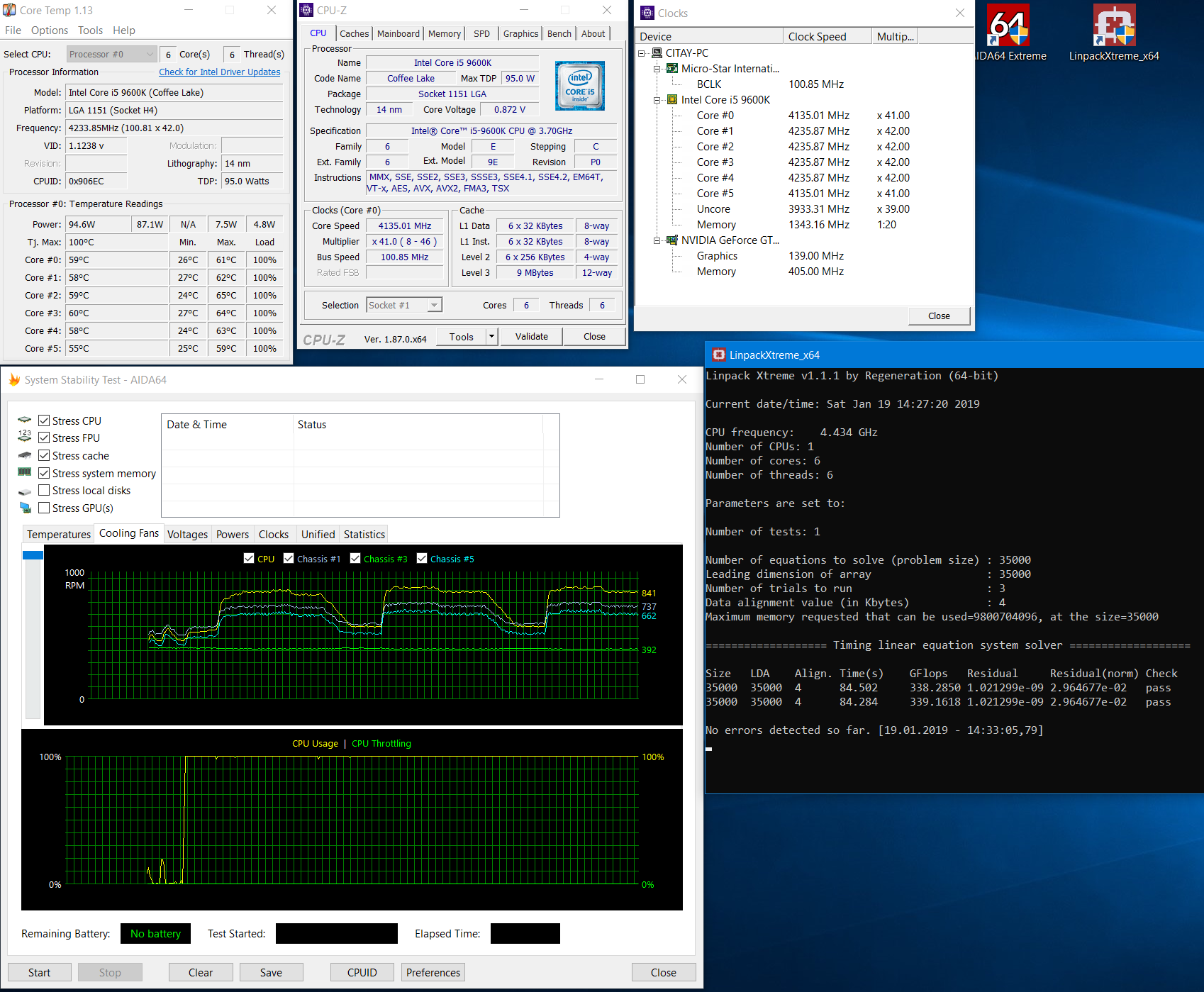 The AIDA64 at the bottom left is just monitoring the fan RPMs, which i set to a temperature-dependant curve.

What you see here is, the 9600K has a Long Duration Power Limit of 95W, and a Short Duration Power Limit of 118W, with a Tau of 28 seconds. It's actually not far above those limits if you disable them all. But observe the fan curves: After 28 seconds, the power consumption drops to exactly 95W, and the temperature-controlled fans follow suit. You can see the slight kink halfway through each of the (almost) three test runs, where the RPMs become lower.

Here is an illustration of the limits for reference: 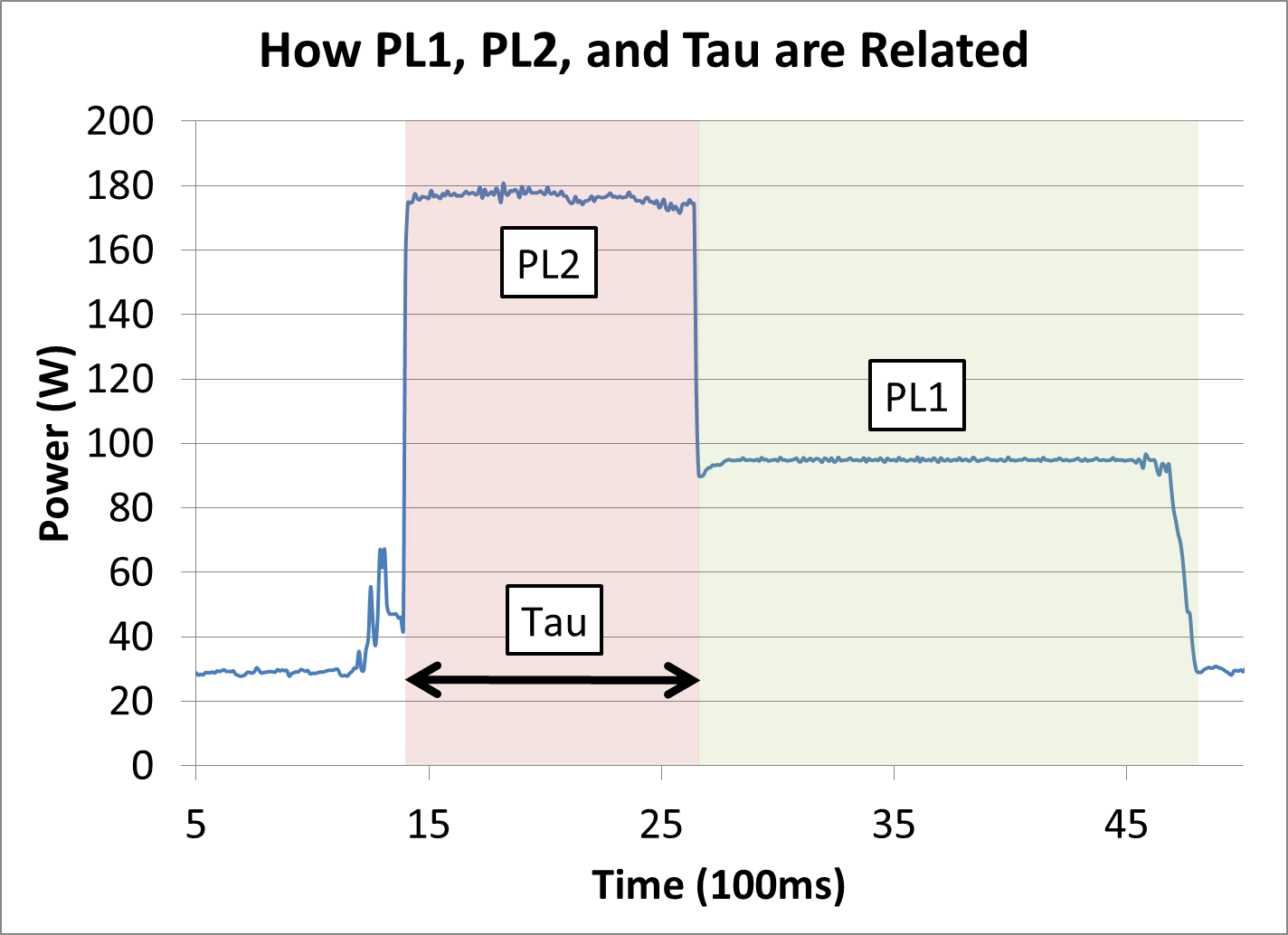 You can see, it sort of mimicks that graph, but in a flatter way, cause the 9600K, even with all limits disabled, doesn't go much above PL1.

For CPUs which are not too far over the limits anyway, you can disable the limits altogether without a big downside, or leave them in place, doesn't matter. Provided you have good cooling. The 10600K is not really limited by the power limits, because it will only go above the limits in Prime95, but not in normal applications. The 10700K is similar to a 9900K, but with much higher power limits. So it will be way faster for shorter full load. There are not many cases where long multi-core load will happen, certainly not in games (the power consumption stays below the limit there), more in encoding tasks. But still it's not a huge loss in performance if you apply the Intel limits.

For CPUs which are limited more by the Intel power limits, you have to look at it case-by-case. If you tell someone to disable the limits on a 10900K, a high-end board and high-end cooling are an absolute must. Otherwise it will quickly run too hot and you'll have CPU throttling, VRM throttling, or both, which will LOWER performance. With cheaper boards, you will also worsen the longevity from all components around the VRM heating up too much.


Anyone got any tips for running this board closer to intel stock?
Click to expand...

Thanks for the in-depth reply!

I realized after reading some more elsewhere that I was fixating on the reported clocks/voltages, and they don't translate into power/watts usage when not under load (that seems like a stupid assumption to have made now). I was worried I was idling and sucking down power, but HWINFO is reporting 10-20w package power idle, which seems ok -- and my temps seem crazy good (idling mid 20s).

I've currently got speedstep/shift enabled, and the c-state level to auto, and C1E is disabled - I'll have to experiment setting those later.
I tend to prefer running at stock to get the feel of a cpu and how quiet I can get everything, but will probably try to push it a bit down the road - thanks for your help.
Last edited: Sep 27, 2020

You're welcome. Enabling C1E and setting C-State to the highest number could yield further improvements. Observe package power, yes, and observe C-State residency in HWinfo64. If it doesn't go down to C7/C8 or at the very least C6, you better set the highest number available C-State manually in the BIOS.

Also note that "stock Intel" and "stock MSI" can be two entirely different things. As can be observed by the power limits. Intel wants PL1, PL2 and Tau set, but most mainboard makers will not set the limits (or not all limits), at least in their higher-up mainboard models. Or at the most, they will ask if you want to have them set or not (some ASUS boards do that).

The same goes for many other settings. Intel offers advanced energy-saving functionality like deep C-States, but not all mainboard makers like to use them all. They want the least amount of support questions, so they keep some options unused that could be problematic in rare cases (like, with very old PSUs). So don't think that by keeping C1E disabled for example, just cause it's "stock MSI", you're being on the safe side - no, this is actually leaving something on the table that Intel has implemented for your benefit.

So i always change certain options on the mainboards i get into my hands. I don't care what the mainboard defaults are, because often times they are not ideal.

BenchAndGames said:
Why you would to run at 4.7 GHz all cores only for a few seconds ¿

Any brand of motherboards are made for running it at unlimited time or up to 100ºC and not just for few seconds like intel specs say. Forget about that.
You dont paid for a beast CPU that will downclock at 3.8 GHz.

Just let the bios at default enable XMP and enjoy that beast dude.
Click to expand...

This is not true, I have benchmarked the i9 with and without the MSI enhancement and well it's the same and during my use of the CPU I don't run the CPU full load more then the 56 sec Intel limit.
But if you run it longer then it make seans but then remember that your overclocking your CPU.
Share:
Facebook Twitter Reddit Pinterest Tumblr WhatsApp Email Link
Top