So after a month or two of using my new GPU, I turned on my PC yesterday and one of my monitors had some distortion, some discoloration with vertical stripes. A few minutes later the image completely stopped. After swapping some wires around and testing on other devices, it appears Displayport #2 has completely stopped working. From the back of my card:

Well, I need all four ports, not to mention the principle and implications of a new card with components already failing. There has been some buggyness with the GPU other than the port failure, however I believe its just a matter of how the PC interactes when running games and tabbing in and out, so the GPU appears fine otherwise. I really don't want to send in a brand new GPU and get stuck with someone's refurbished half burned-out cryptomining card or two weeks off downtime when I need the PC for medical filing and etc. I don't suppose anyone knows about this particular card having this issue and if there's a way to jumpstart the DP in settings somehow? My LG tv's HDMI port would sometimes konk out and need a full power down to reenable, for example.

If same on all monitors with DP 2 it will likely be a hardware fail and not software
Contact you Suppler about Warranty options
or MSI Support>>How to contact MSI.<<
I

So far it's just been the one reply saying the card is probably faulty. I have an RMA but haven't sent it yet because without the GPU my PC has no built in graphics and I need it to use the PC. I'm also reading that some people have gotten the card back and still had the problem, and this was after a month's wait and having paid a good chunk of money to mail it in. Apparently MSI makes the customer assume shipping costs for their product defects, which is irritating because I already spent 500 bucks on this card and lost my income.

imatron said:
So far it's just been the one reply saying the card is probably faulty. I have an RMA but haven't sent it yet because without the GPU my PC has no built in graphics and I need it to use the PC. I'm also reading that some people have gotten the card back and still had the problem, and this was after a month's wait and having paid a good chunk of money to mail it in. Apparently MSI makes the customer assume shipping costs for their product defects, which is irritating because I already spent 500 bucks on this card and lost my income.
Click to expand...

Alan J T said:
Why don't you just return the card to the store you got it from for RMA or Exchange under warranty
Click to expand...

I thought it was clear from my last post:

*I have an RMA but haven't sent it yet because without the GPU my PC has no built in graphics and I need it to use the PC
A bit of artifacting aside, 3 out of 4 video ports are still working and I have medical and disability discrimination issues to take care of. I need a working PC to take care of that.
*I already spent 500 bucks on this card and lost my income
Kinda hard to pay 50 bucks shipping when you lost your income due to medical issues and disability discrimination. Every other PC company I've dealt with (excluding Sony/Microsoft peripherals) has sent me prepaid labels for their product defects. This conditioned me to think it was an industry standard, but apparently with MSI it's not and I didn't realize that until I tried to RMA it.

Additionally the store wont take it back now, they say it's exceeded their exchange window. I'll follow through with the RMA as soon as I can, but it requires hoping an old GPU is still working/compatible, hauling a heavy Coolermaster Cosmos S case to a table where I can open it up, and hoping I can swap the parts out with a bad left arm and some surgery, and digging up enough cash to mail it in afterwards. I realize MSI is not directly responsible for much of this, but I can't say I'm happy about the reliability of their newer products leading to this situation. I had better expectations after their K9A2 CF motherboard lasted as long as it did.
Last edited: Aug 23, 2022
I

OK so I thought I have an RMA, they gave me an RMA number and mailing address, however the information I received in the email says "Items in red are rejected, please do not send in items in red" and my GPU is listed in red. They do not provide anything for the "Reason" box. They do however provide an address to send the GPU to, which is confusing. I've tried to submit an inquiry/status check, and it keeps giving me an error message.
Last edited: Aug 24, 2022

Have you tried calling or using the um, Online Chat, but that is country depend on where you are 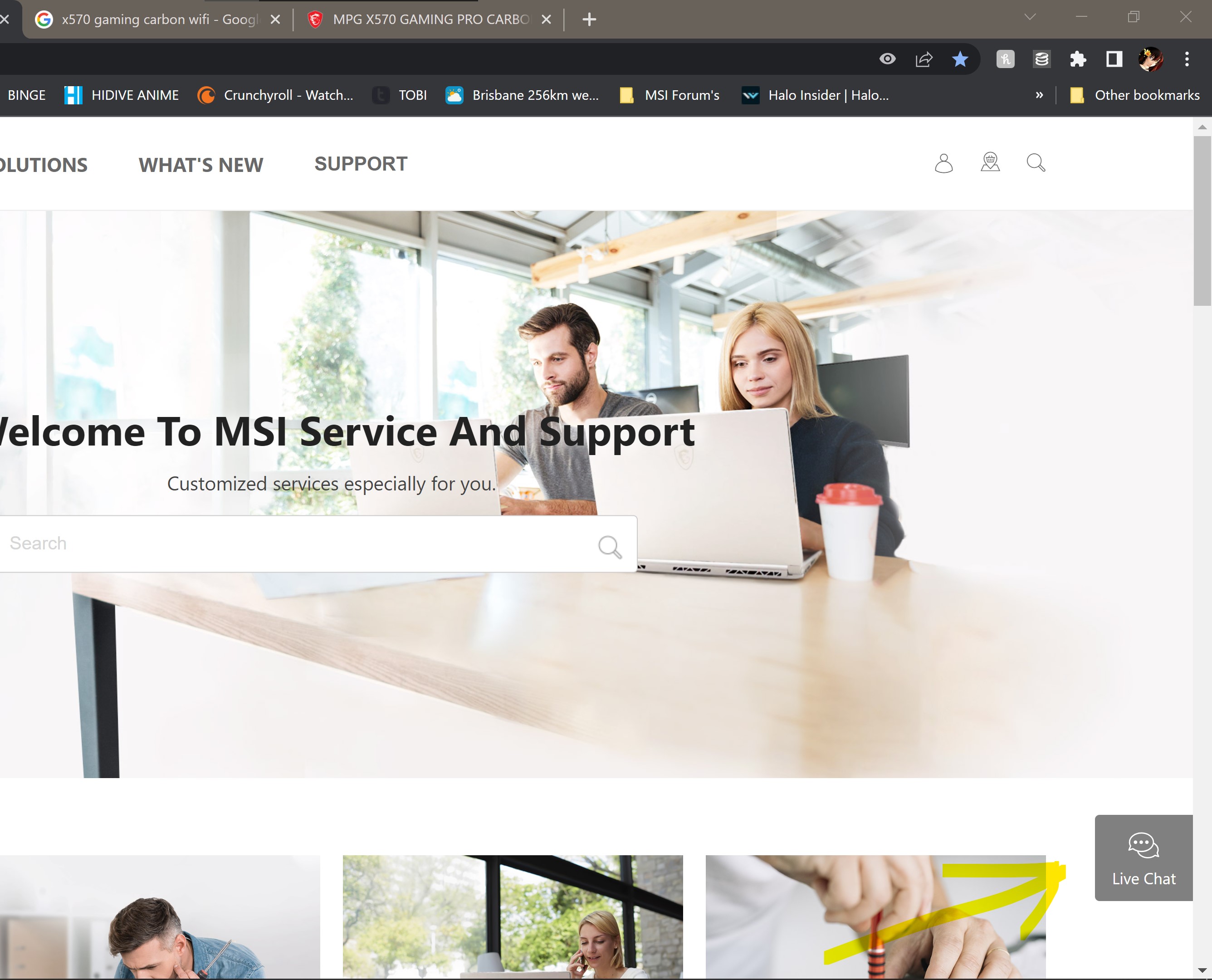 Alan J T said:
Have you tried calling or using the um, Online Chat, but that is country depend on where you are
Click to expand...

Just got around to this a few minutes ago after customer service reopened this morning.

They DID reject my original RMA, though there was no explanation why. The agent submitted the information again and I got a valid RMA, as well as a prepaid shipping label.

So, PSA: If you submit an RMA, even if they reject it, it can look like a valid RMA because they give you an (invalid) RMA number, a shipping address that implies you have to pay to mail it yourself, and mailing instructions. They expect you to check and see if item you were trying to RMA is in RED TEXT which indicates rejected RMA. In my case, and apparently several others with this issue via a google search, it can be easy to mistake this for a valid RMA and ship it anyway.

Due to Local laws and regional government laws each MSI regional office will do RMA a bit different. As they need to be within local government and Local law guidelines.
I

OK So I just got the repaired GPU back and I have 2 issues.
1. They bent some of the dissipation fins near the exhaust end of the card with the video ports. They also left a few scratches across the armor plate that were likely done by allowing metal tools to scrape across the top.
2. I removed my older GPU I had swapped back to, put the new GPU in, and reinstalled the repaired GPU's drivers. During the course of the driver installation, I was using the Displayport that was previously not working. I was getting a signal out of that port, albeit it was not a great visual because the drivers were not installed yet.

After the drivers were installed, I reset the PC to enable the drivers, and that port is apparently dead again, and swapping the cable to the port over, the monitor came back to life. Its sure sounding like a software issue is preventing the port from working, and that I sent my GPU in FOR NO REASON and for it to come back with damage it did not have when I sent it in. Either that or the port immediately died during the restart.

EDIT: I uninstalled the display drivers and did a few restarts with different monitors plugged in on different ports. This was to test if the display drivers were conflicting with the port somehow since the port was working before the driver install/restart, but the displayport did not start working again. Whatever they did to repair the GPU's malfunctioning displayport, it appears to have mechanically failed again.
Last edited: Sep 19, 2022