I was intrigued with the Stealth 15m ever since it was released, I was looking for a laptop to transition from the desktop I was using due to being a bit more mobile with my job. My desktop specs were as follows.

I don’t really do anything strenuous on my computer just web browsing the odd video to edit and I’m completely addicted to Beam.ng

Even though Beam.ng is quite multithreaded when you spawn multiple cars single thread performance is still very important and this is where the 11th Gen i7 1185G7 caught my eye with its 4.8ghz single core boost.

The MSI Stealth 15m I bought for $1800 cdn is configured as follows:


For $1800 there wasn’t much else that could match these specs, and I have to say I’m very glad I picked up this laptop. I was most interested in the performance of the i7 1185G7 since most of the review online focused on the 28w and 15w performance of the CPU. I’m pleased to announce that as of now this is probably the only laptop that runs the CPU MUCH above intel’s specifications and as such make it quite fast especially in lightly threaded tasks.

MSI offers their Dragon Center app to control things like RGB keyboard and GPU and CPU fans (each has their own dedicated fan and heatpipe) I will make reference to which mode I used below when I talk about thermals and performance. Just note that for the videos below I had the fan set to “cooler boost” which puts them to max speed is very loud and sounds like a vacuum cleaner. I’ve found since testing that even with the cooler boost fan setting off there is no thermal throttling, with the fans set to auto they eventually do ramp up and are somewhat loud they aren’t anything like what you hear in the video. 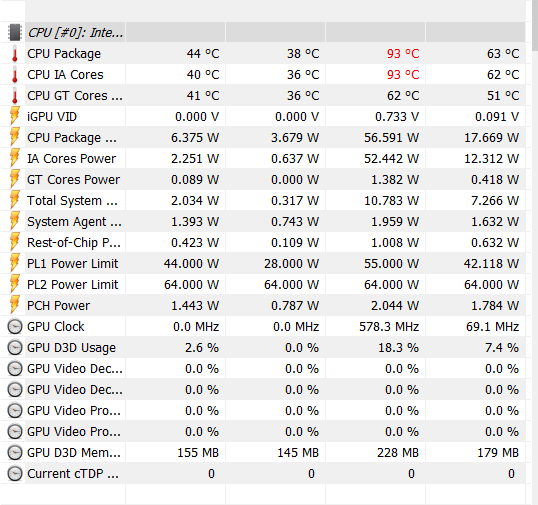 Using Cinebench R15 I started with the multithreaded test.


Here you can see the CPU turbo up to 4.3ghz which is the max all core turbo with a power draw of 55w, it stays at 55w and 4.3ghz for the entire time no throttling just a power limit throttle. At this point the max CPU temp was 82c which isn’t bad at all. 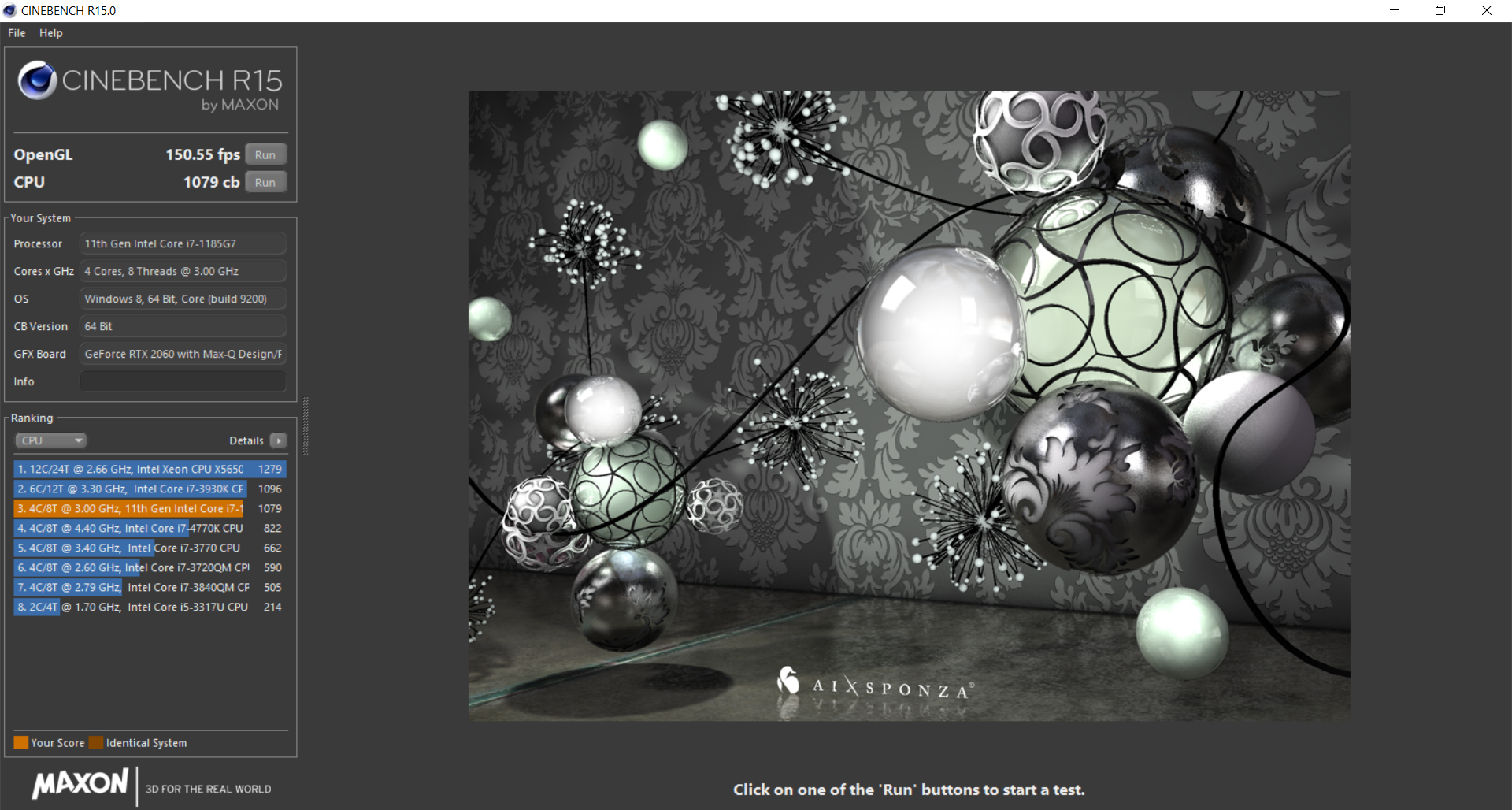 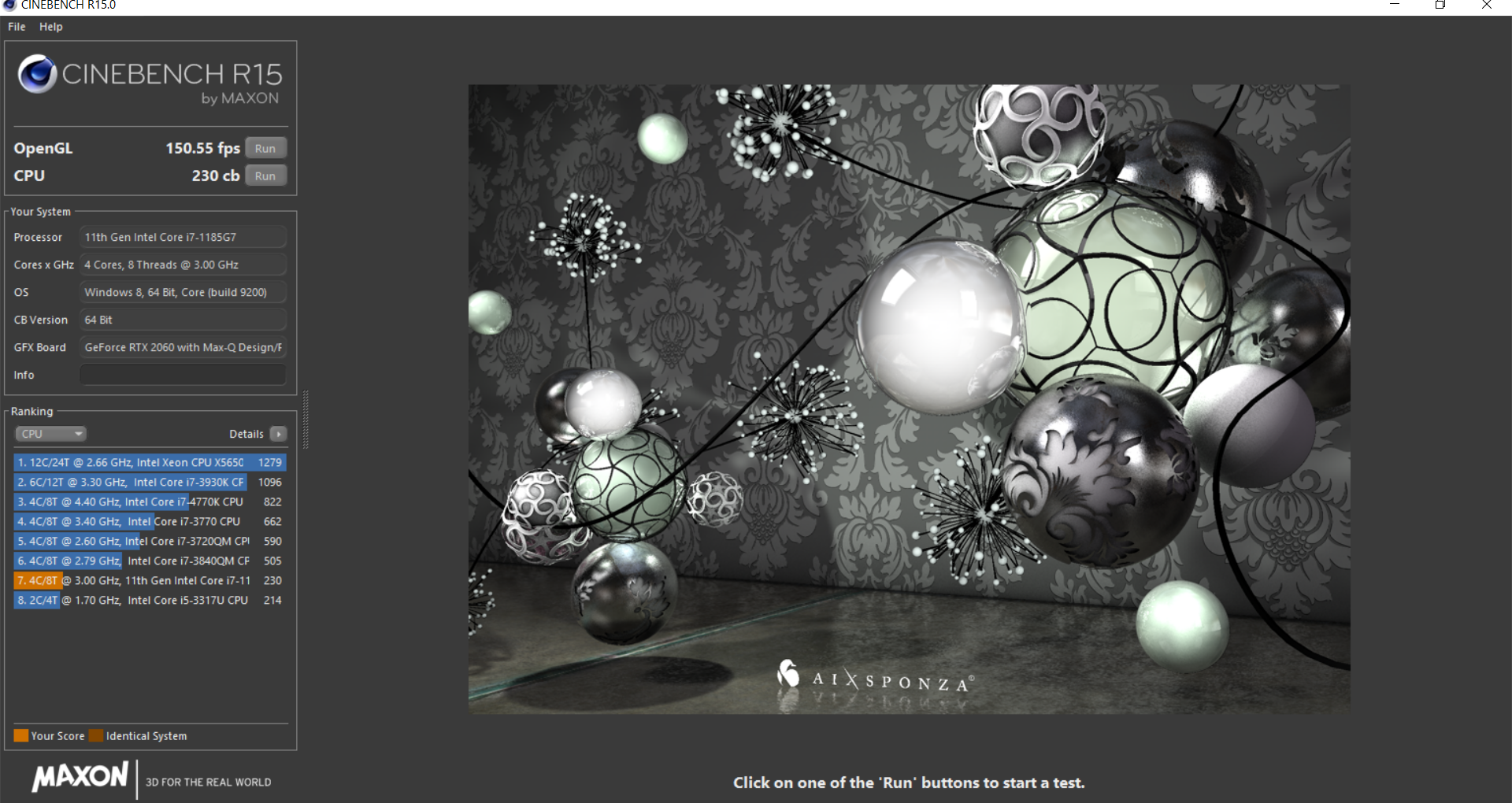 The cpu hit max single core turbo of 4.8ghz and stays there with a TDP draw of approx 21w CPU temp never goes above 82c 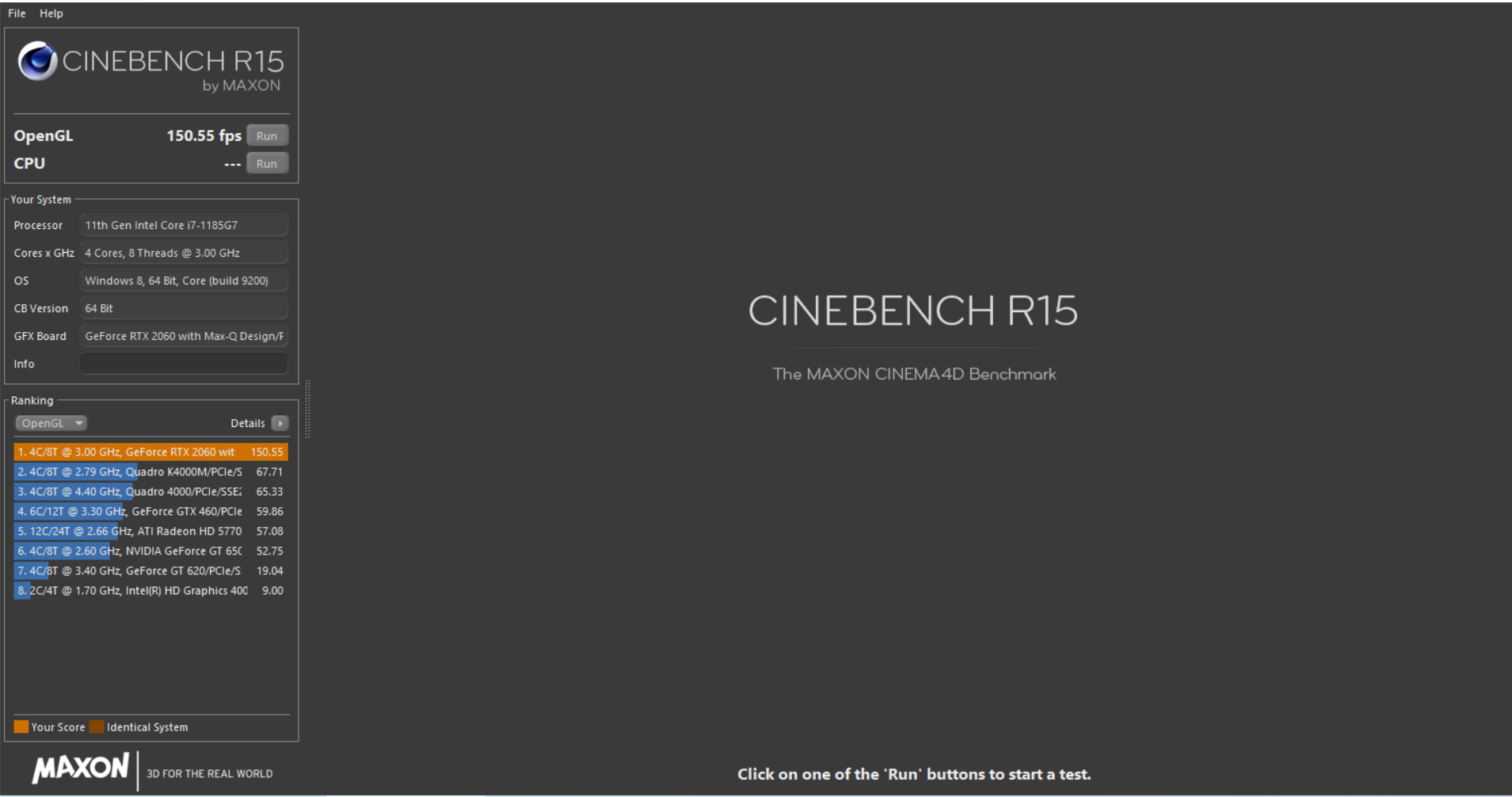 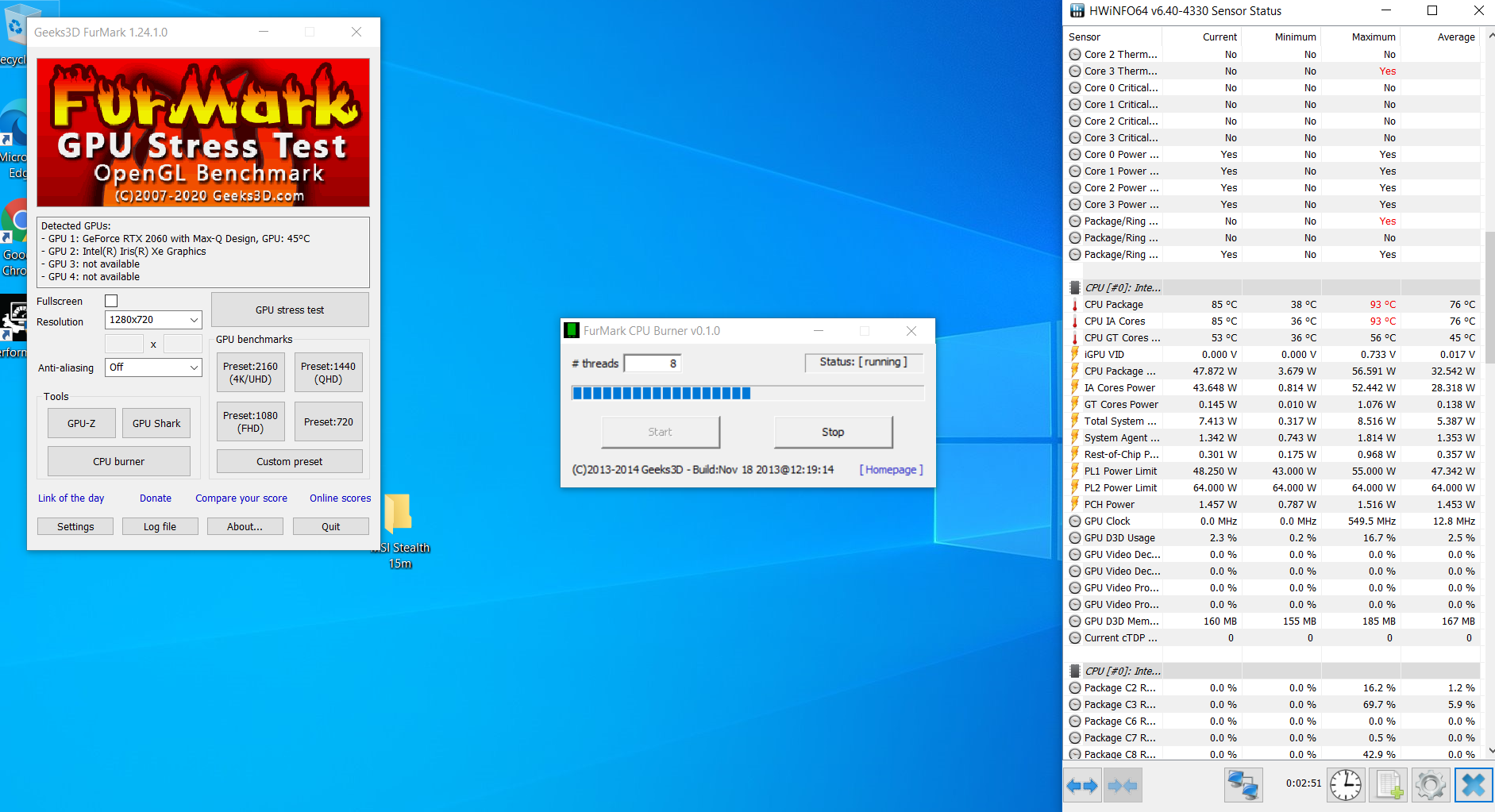 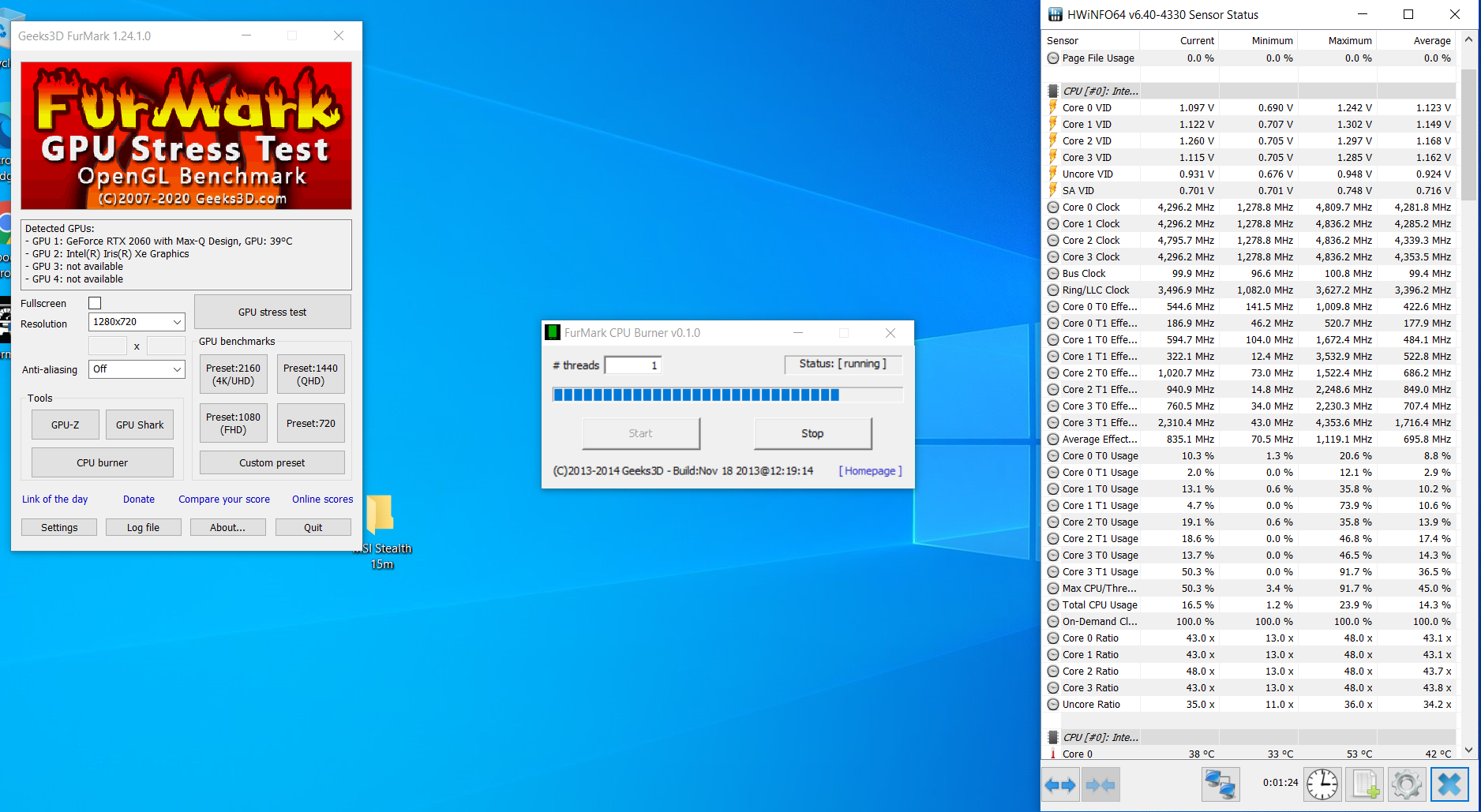 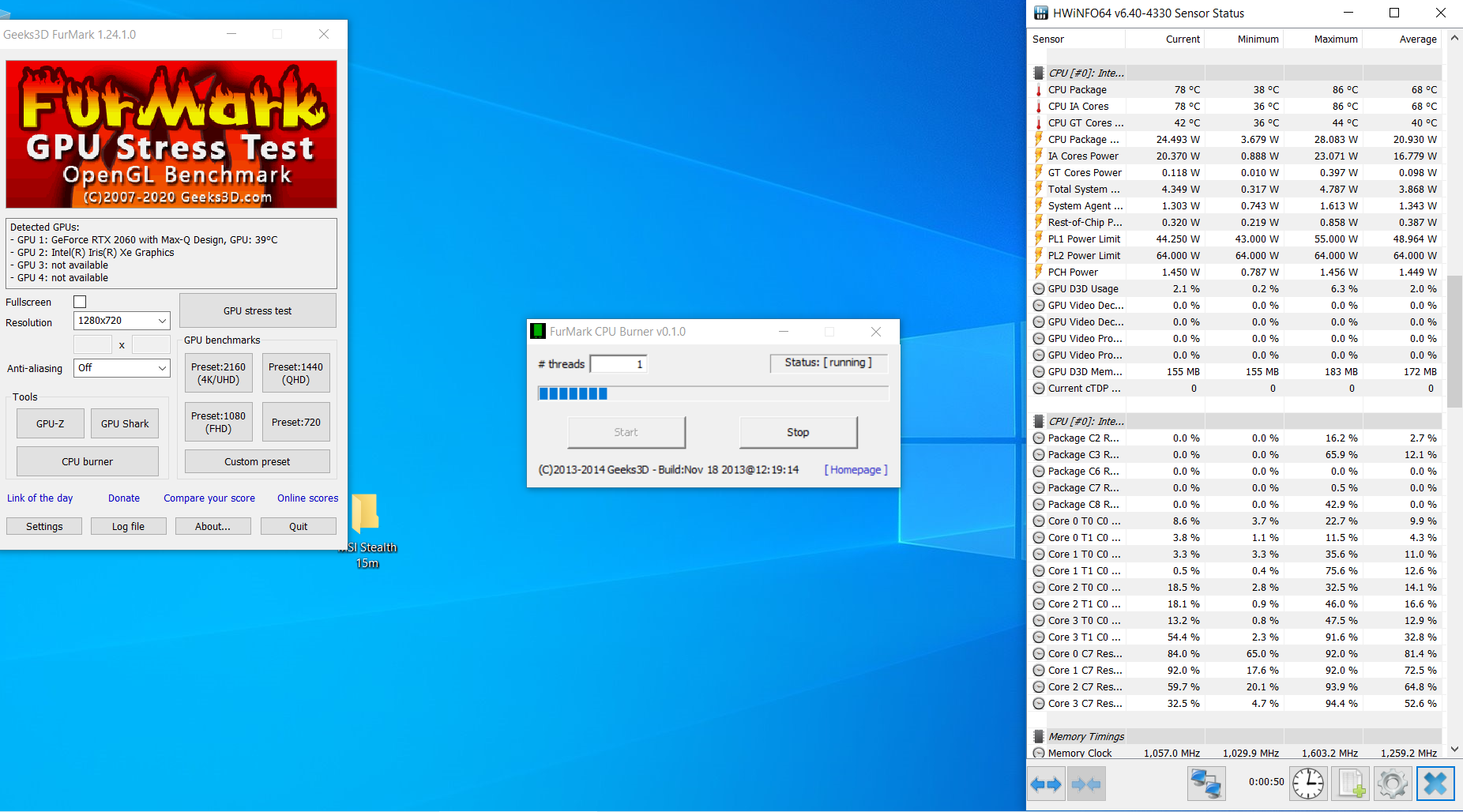 Furmark single threaded test starts out with 4.8ghz single core turbo with a TDP of 25w it keeps this clock speed indefinitely

After being pleasantly surprised at the CPU performance I decided to test out the RTX 2060 Max-Q. The TDP on this card is 65w. Stock clocks are 975mhz with a Boost up to 1095mhz when under full load. Memory is 1375mhz. 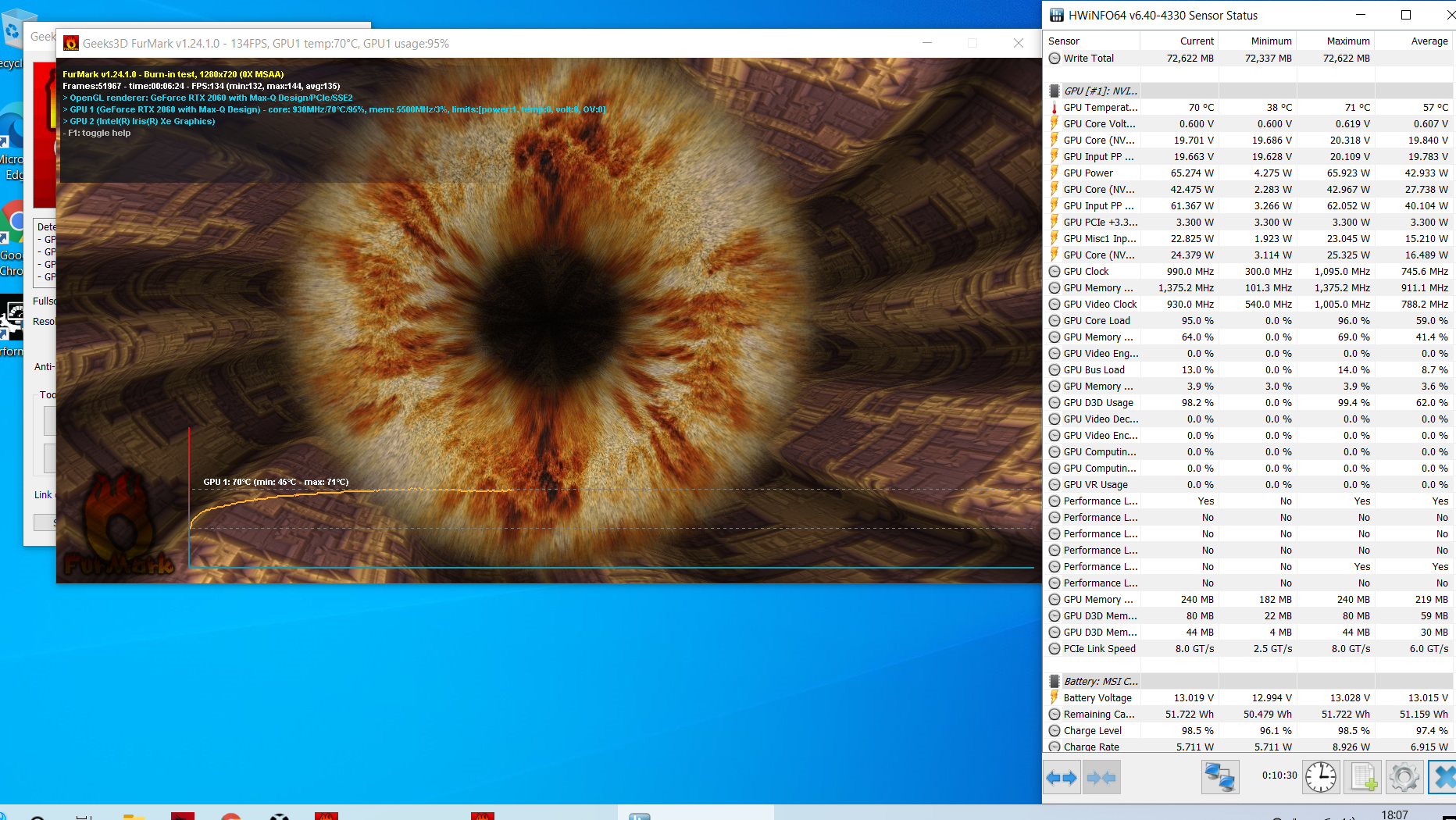 The TDP spikes right up to 65w off the bat and the core hits 1095mhz then settles back around the 990-1050mhz range the entire time, staying at 65w the max temp I saw was 72c which is very nice. I mentioned about overclocking earlier and it doesn’t matter how much I overclocked the core instead of thermal throttling all it did was power limit throttle and keep the TDP at 65w. The only thing that overlocked and had a positive impact was a small memory overclock, however I have not had a chance to test out of there are any gains with the memory OC. In games, well the only game I play Beam.NG I would see 1500mhz boost clocks from time to time. GPU wise I will need to look at undervolting in order to get the GPU clocks up as the power limit is the issue not thermals.

Now on to a few other benchmarks. 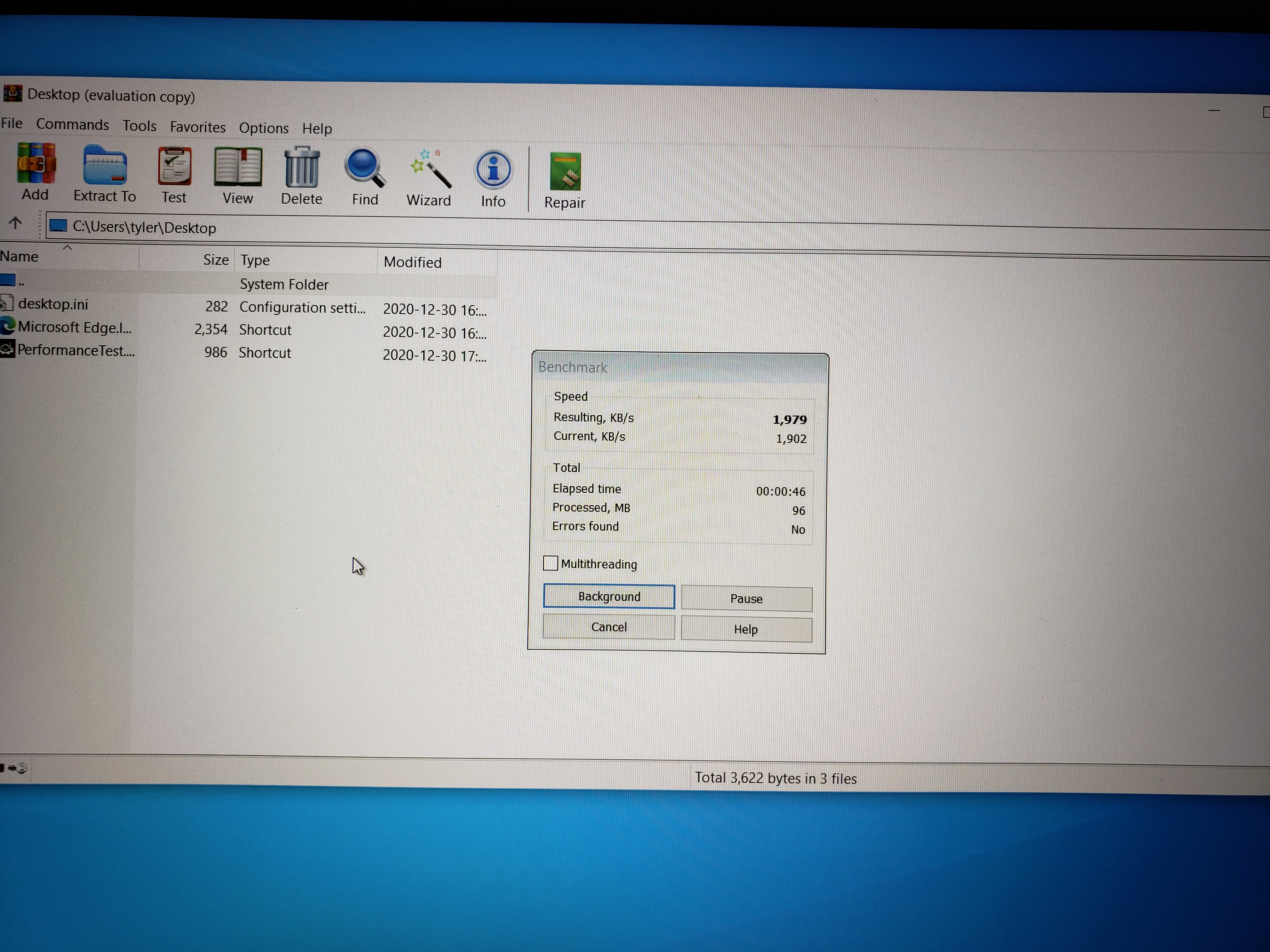 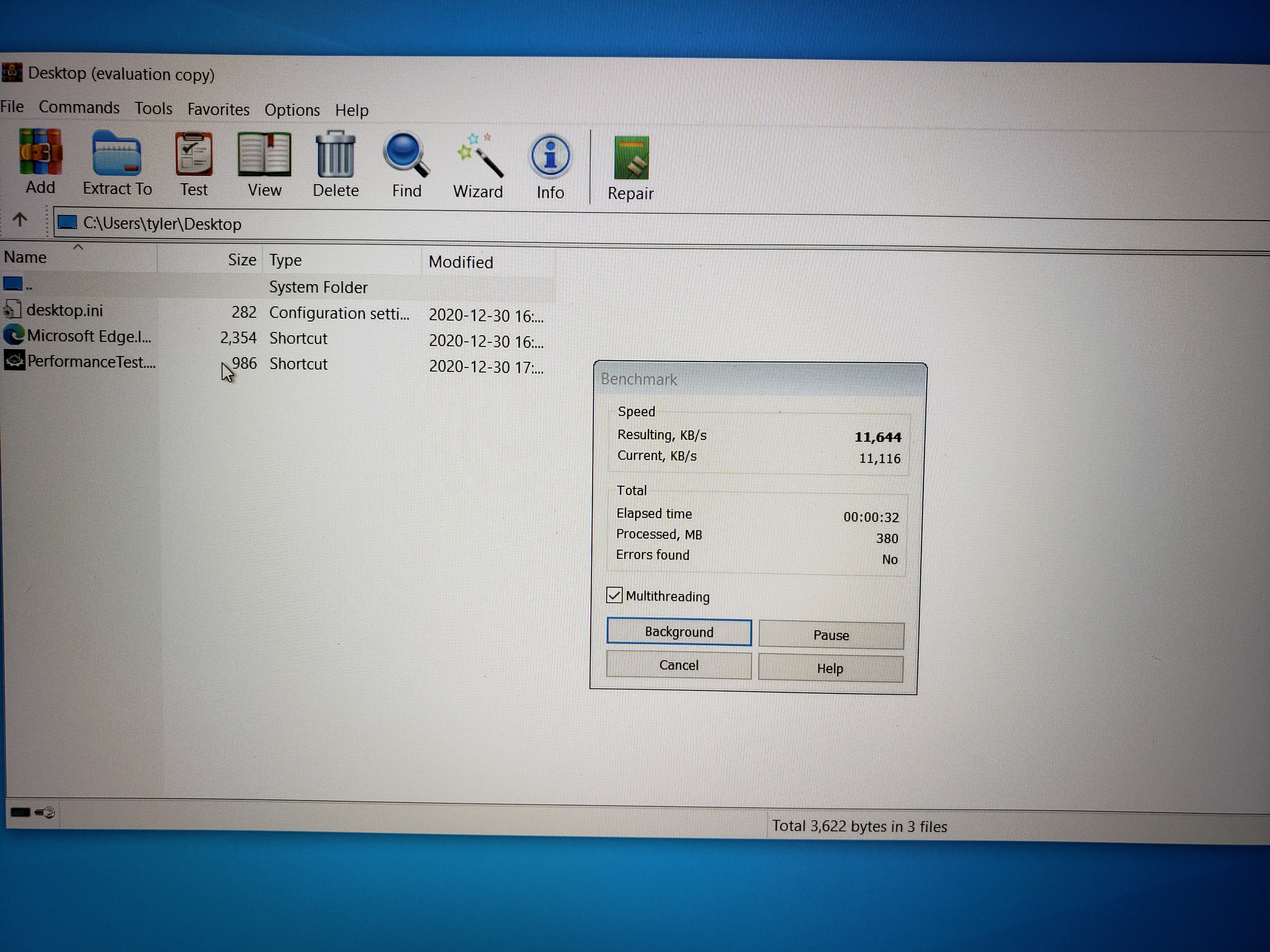 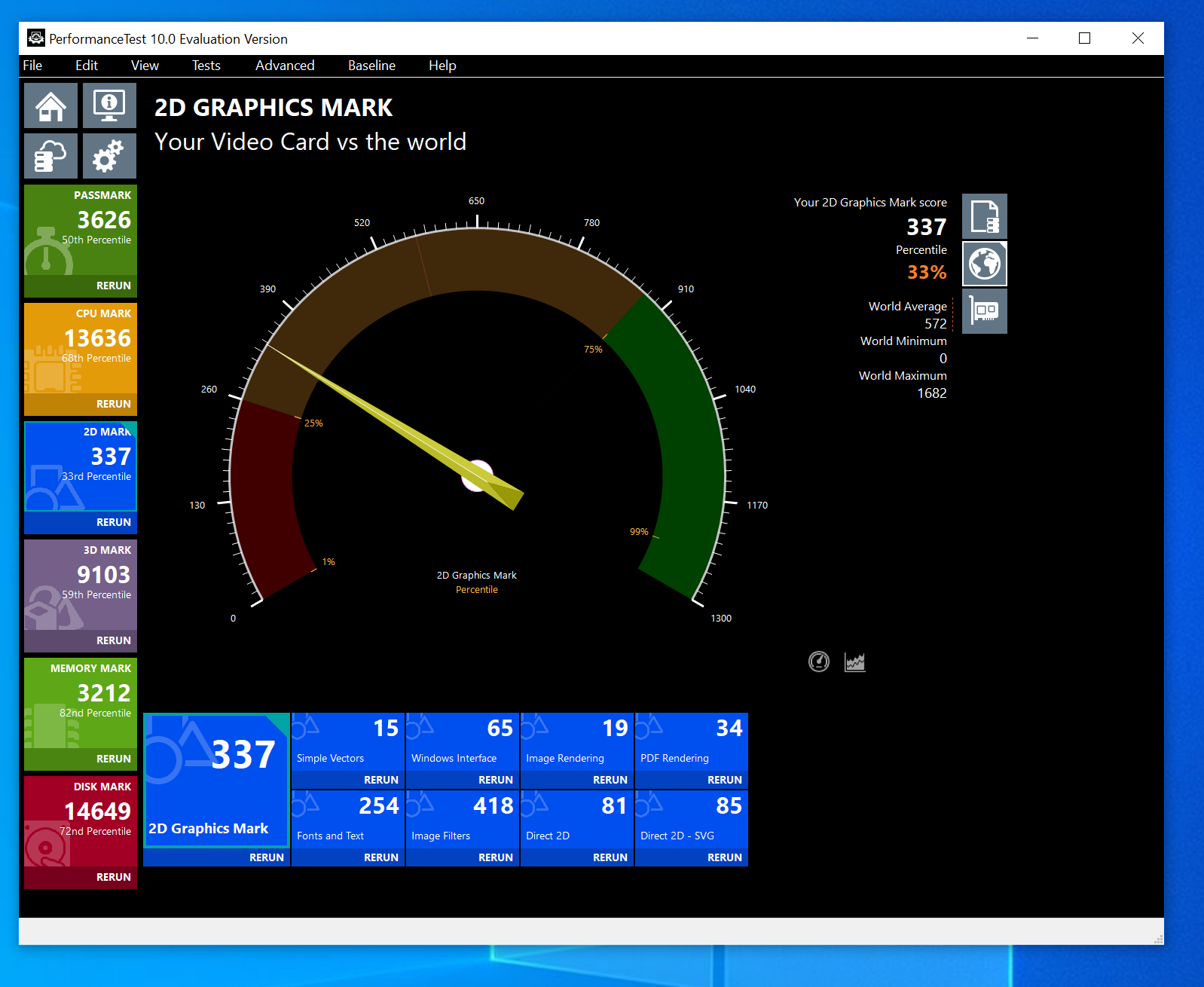 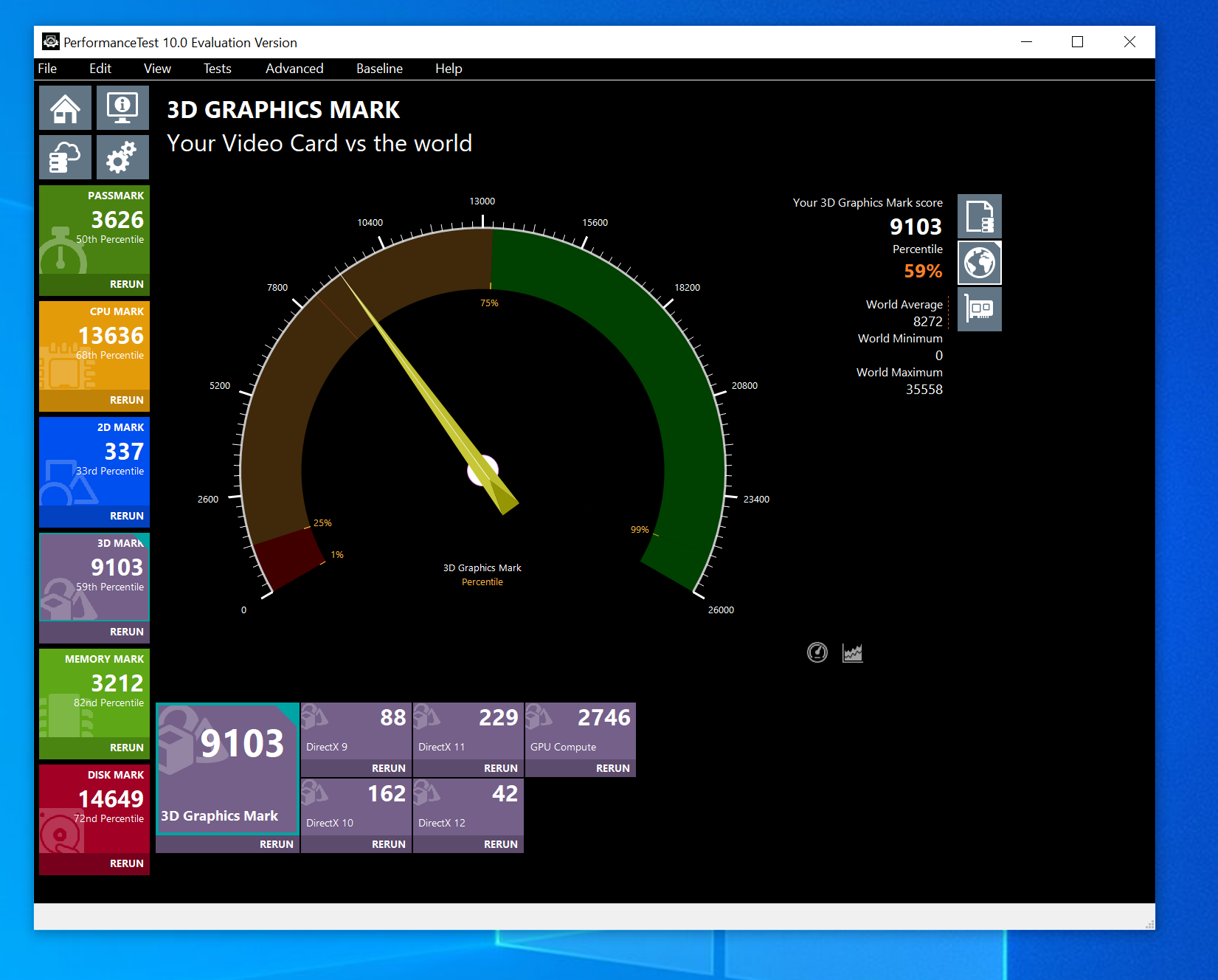 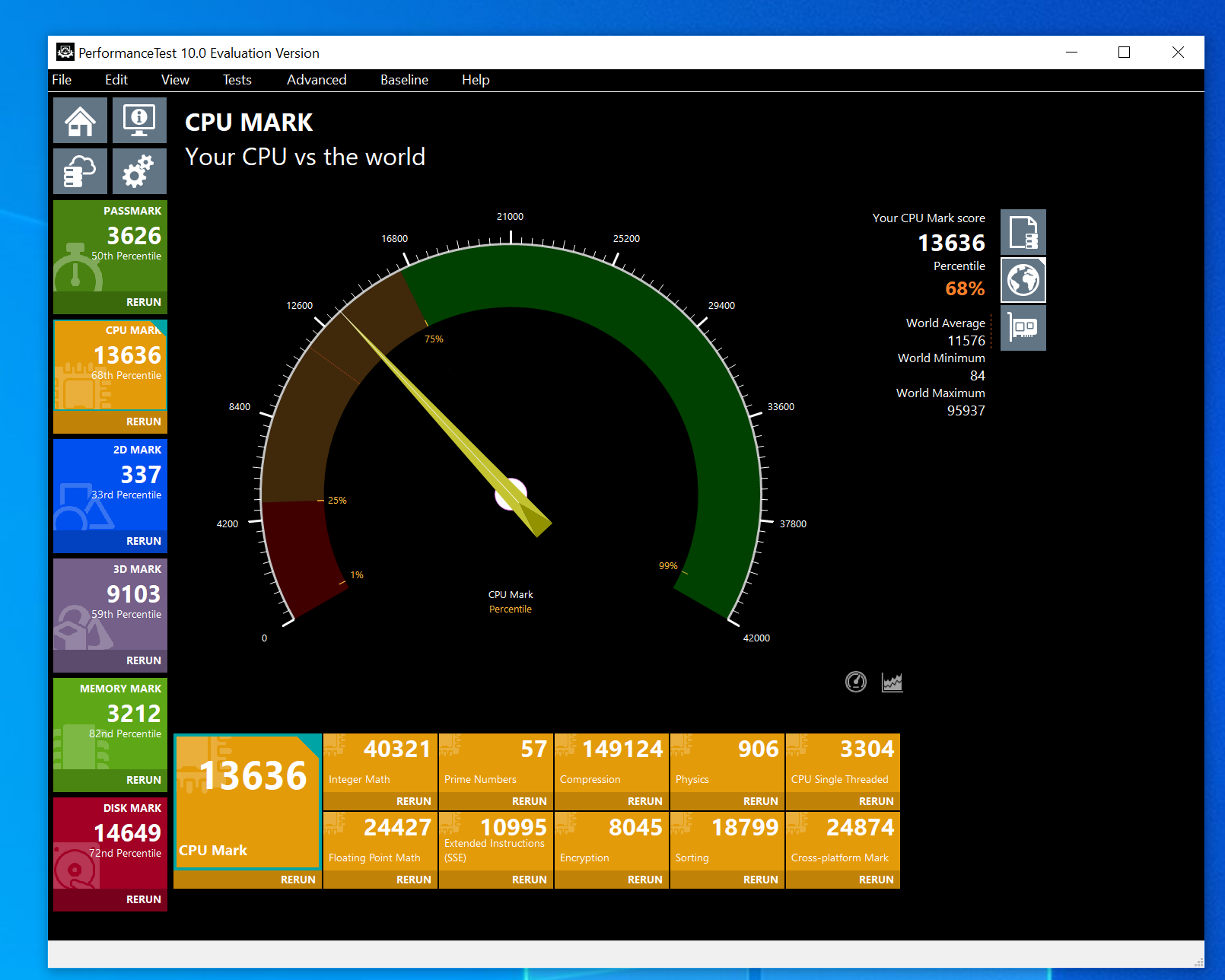 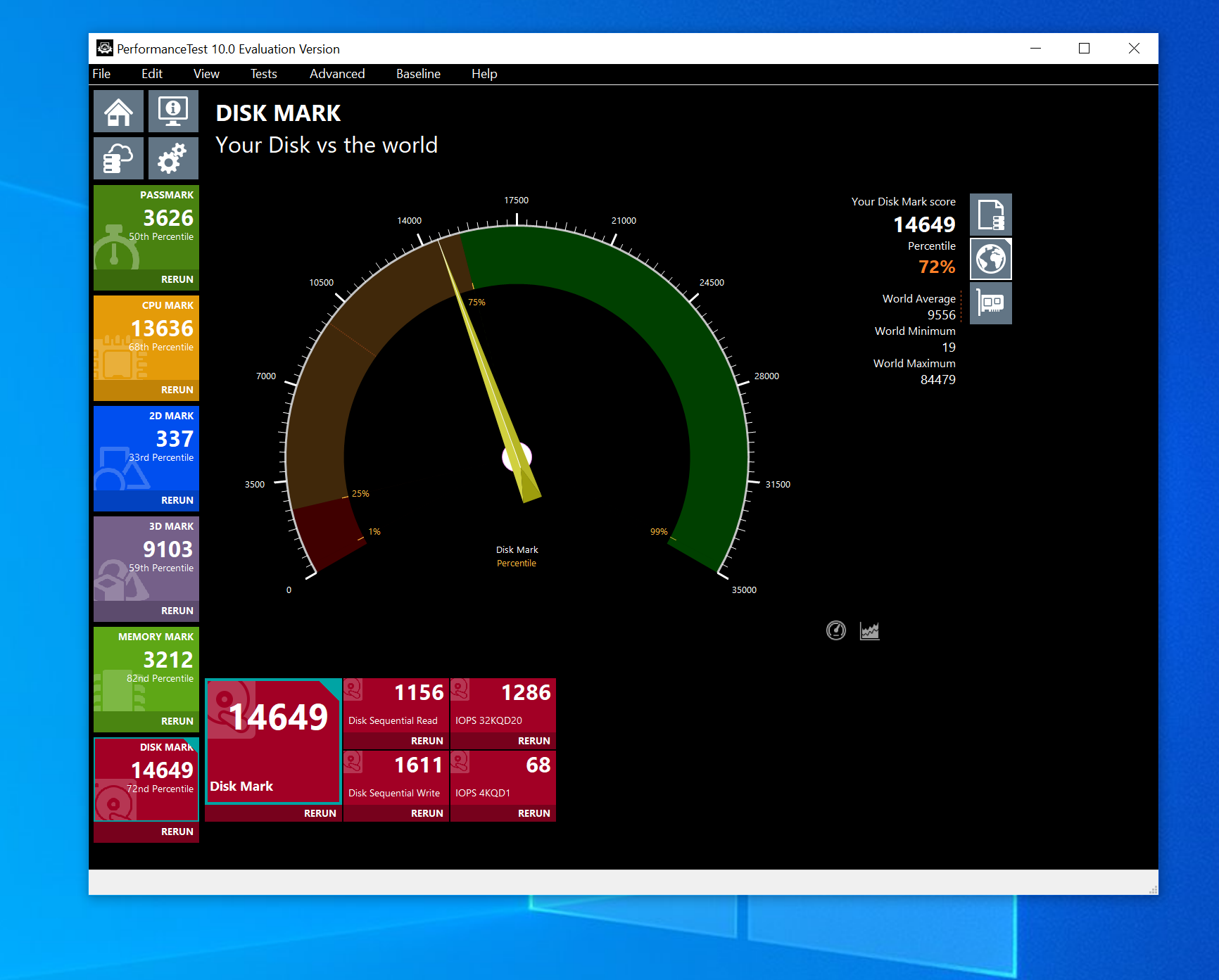 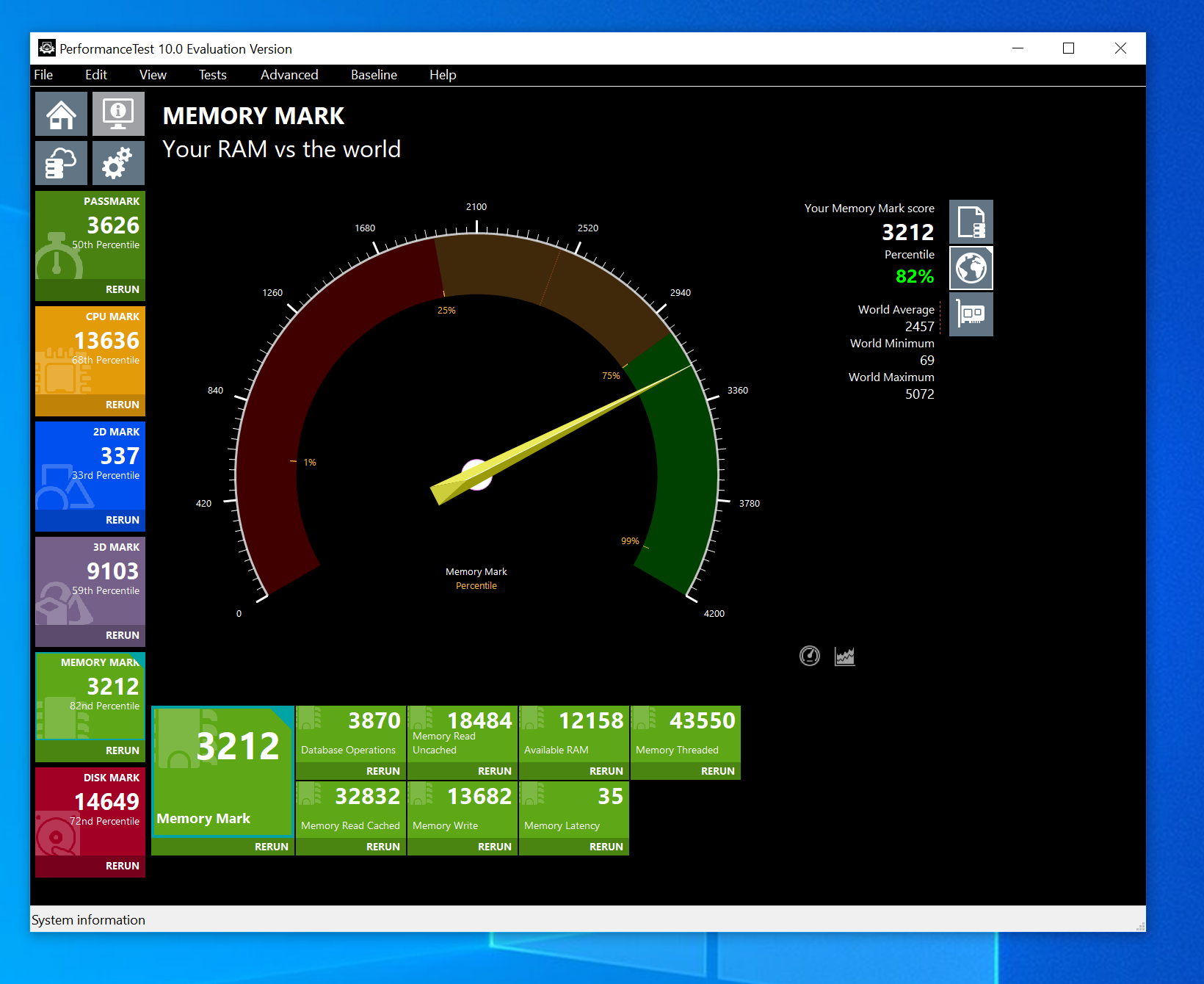 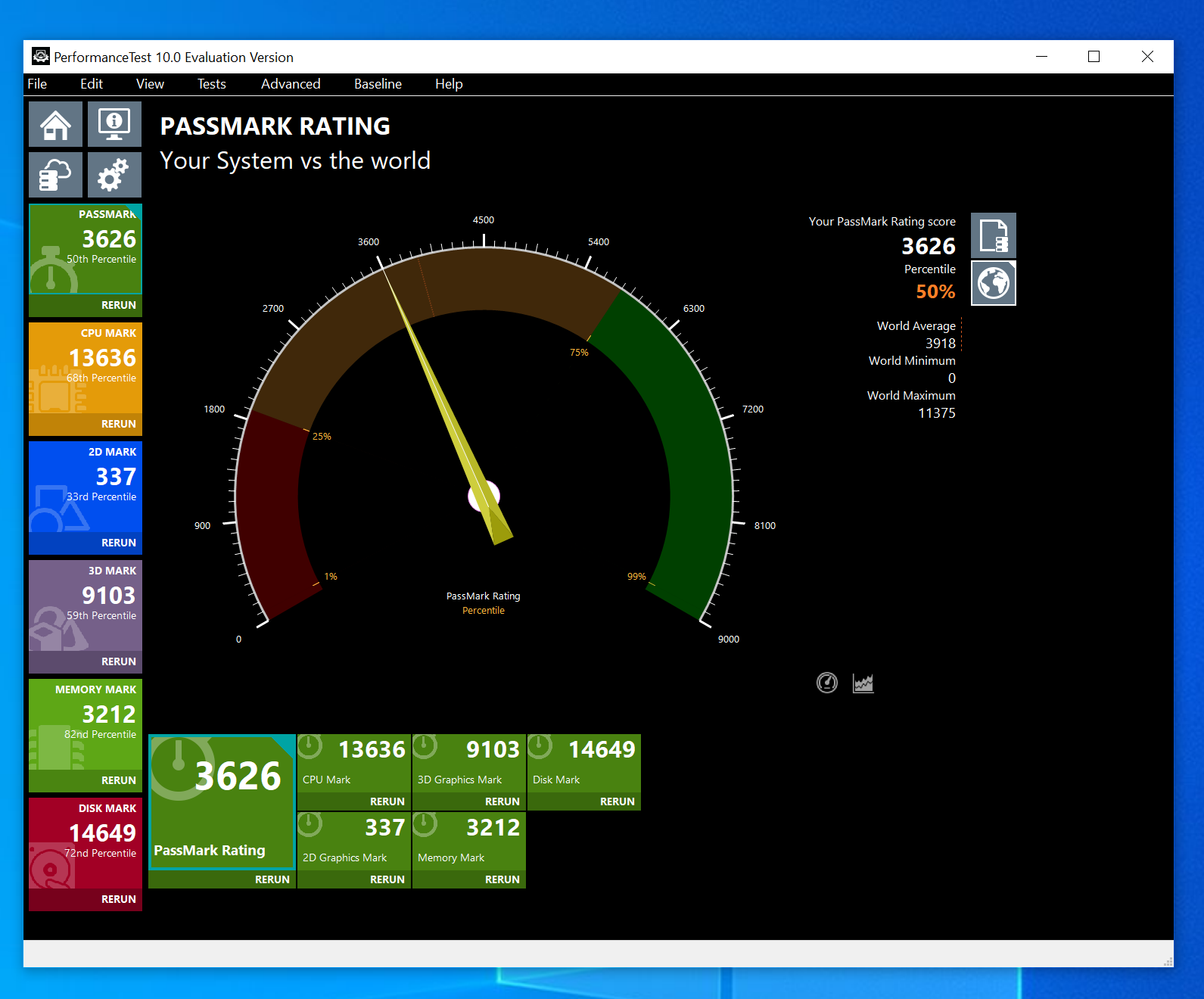 Check out the single core score of 3300! 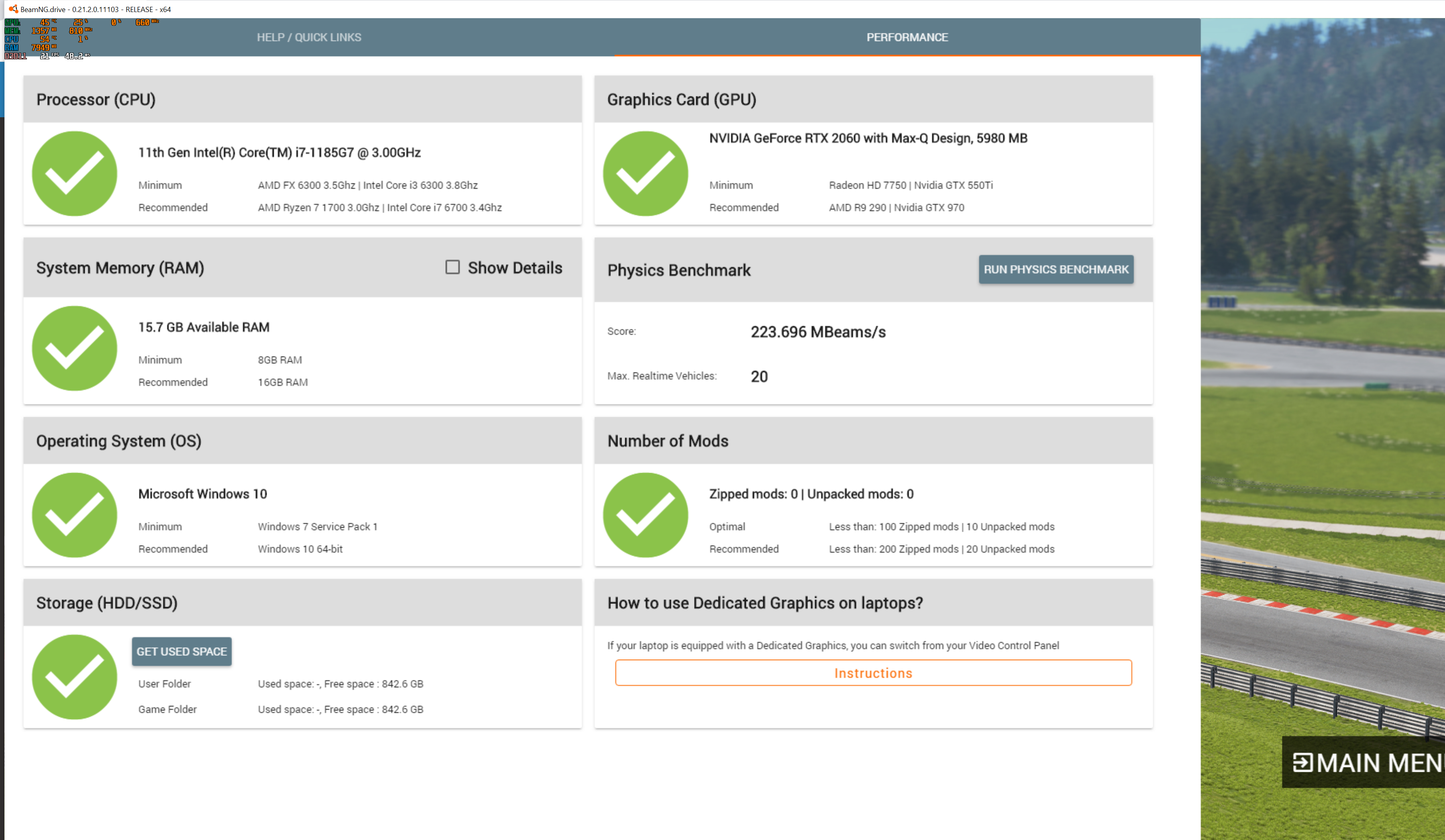 With all the exciting benchmarks out of the way I will turn to my only complaint, the SSD.

Tiger Lake supports PCIe 4.0. So why did MSI include a rather garbage gen 3.0 SSD Kingston 1TB drive? Benchmarks aren’t the best and to be fair the system feels very snappy and things load faster than my desktop but that’s probably more to do with the CPU than anything else, but coming from a gen 4 SSD being used in my desktop in a Gen 3 slot (Sabrent Rocket 4.0 500gb) this one just plain sucks, I’ll likely pick up a gen 4 ssd and swap it in one of these days. 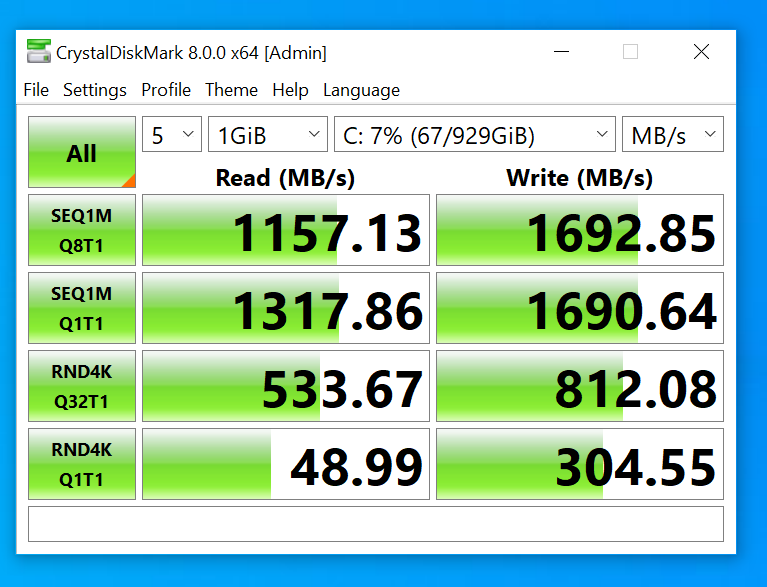 Full disclosure. I don’t believe I have the proper cables for proper 100w USB PD operation. I have a 100w USB PD charger however it would only charge the laptop at 60w. As such when plugged in using the TB 4.0 port

When on Battery (CPU/GPU max performance)

Once I get a proper cable I will retest this and hopefully it mirrors the behavior when plugged in.


Overall I’m very pleased with the laptop. Haven’t had much time to focus on the battery aspect of things but from limited use, using the super battery setting it would look like around 3-4 hours of use, not ideal but I’m not planning to be away from an outlet or powerbank for long periods of time. You’ll notice that I haven’t talked about the Iris XE graphics, still trying to figure out how to get them to work in 3D games and not just the desktop. I’ve tried in the Nvidia control panel disabling the RTX card but it still seems to pick it up any time there is a 3D type load.

If you have read this far good for you if you are looking for superior performance for lightly threaded tasks and some light gaming the Stealth 15m might be for you, Zero thermal throttling at all in a laptop is quite a pleasant surprise.

but visible still MSI config is not ideal

MSI config is not ideal? What about the configuration is not ideal? If anything I think they could have put a non Max-Q RTX card in the chassis as the GPU is cooled perfectly fine at the 65w TDP, there is room for more performance because of the thermal headroom.

your score is good "msi runs high"
, .but for specific use video editing or AVX2 - will burn
"and try to work all day" check eurocom or asus - get 80C or lower "all time"
.,.,better configuration for all usage

new it can't heat up like that ,,not exist space for longer usage
I think it's wrong

the Prochot is set at 95c on this laptop, only in Furmark does it hit this limit however it really doesn't throttle down at all. Again max GPU temp is 72c under full load. Yuo show me a laptop that has a better cooling system that barely throttles like this one.

don't test your laptop
,.kill only your thermal-paste "only LM positible testing longer time" without problems !!!

specific usage is problem ,,gpu is OK "87C is limit"
Cpu ? I think they could have set it better ,.,.,. that's all "8 cores cpu sometimes run on max" longer time

you will see over time ,, still looks better than some other models
,..and it depends on games and work !
T

1. Don't test my laptop? Right because there is hardly any reviews our there so why wouldn't I share my results with others.
2. The CPU is fine, even though it hits 95c is still maintains max all core turbo except in the most extreme scenarios meaning 4.0ghz all core turbo instead of 4.3ghz
3. I won't see anything over time the laptop cooling is suffficent and will continue to be
4. Eurocom or Asus laptops that have temps below 80c likely do because they are much larger heavier and thicker and not as slim as the MSI Stealth 15m so no wonder they may have better cooling solutions.

it is meant in a good way
hopefully it will last you and it will work as it should.,,. long term

what do i remember my GT ,,.good for easy gaming "absurd for any heavy work"
SPECIFIC USAGE " "the problem is that the other NBs are running lower, but all time !"

and all time testing --faster kill your paste