So I bought this PC pre-built in August 2021, it arrived in September 2021 and worked great for gaming a video editing.
A couple of days ago I noticed the fans were getting louder than normal, but didn't really pay much attention to it until I noticed a huge decrease in performance and that my fans sounded like jet engines all the time while it was turned on, even when just sitting idle.

I fired up MSI Center and using the hardware monitor, I could see that at idling speeds, my CPU was hovering at or around 100 degrees celcius. 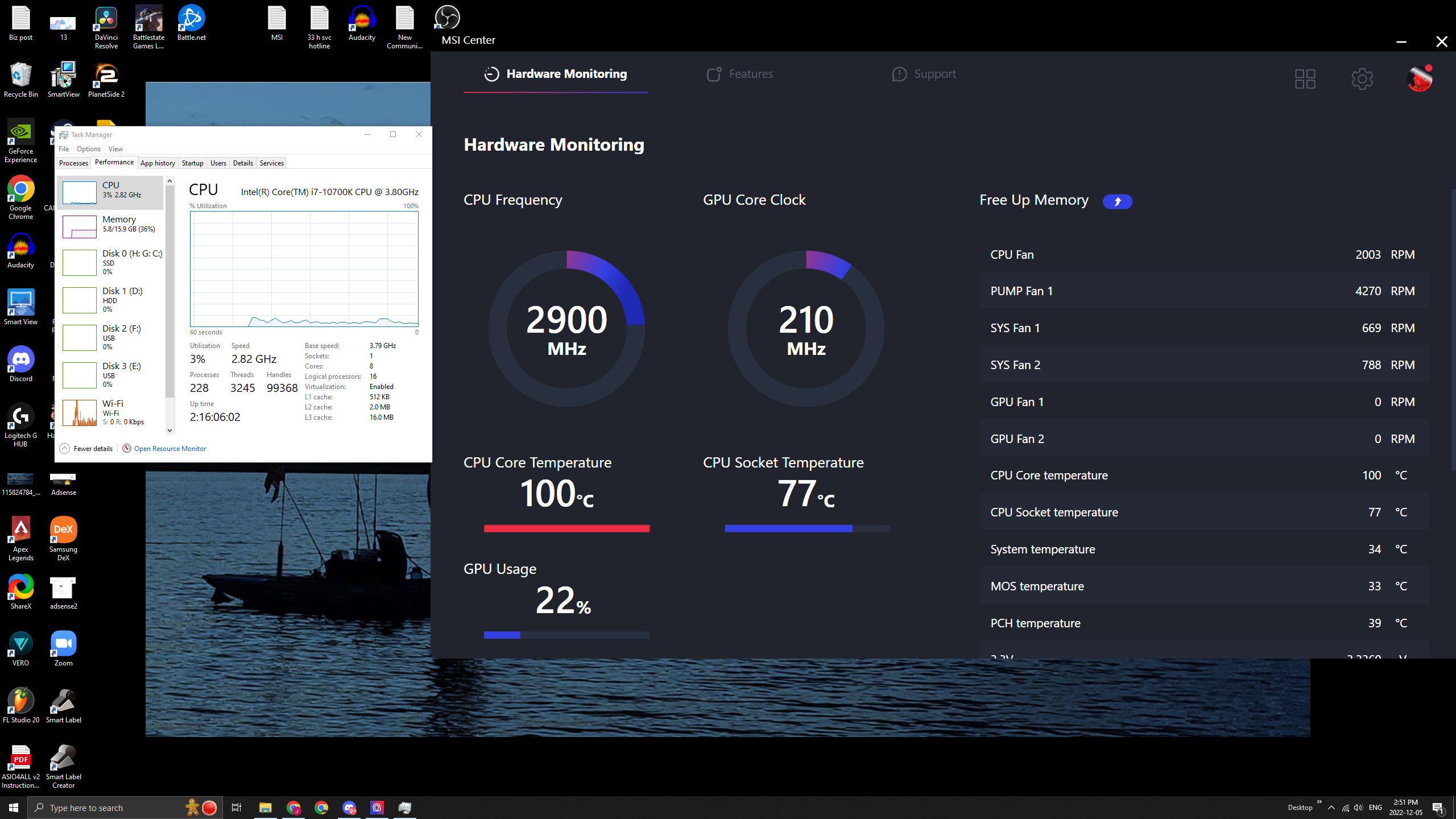 Nooooo bueno! So I submitted a web ticket and was basically told "too bad so sad, you're desktop is not under warrenty anymore". I dug deep into the web to find out what could be the problem here, as obviously there is an issue with the cooler.

I found the recall announcment for the 240R's, but wasn't sure if thats what was in my PC, since on all the specs it was just listed as an MSI Dragon Liquid Cooler. I put in the desktop serial number instead and came back nil.

So I thought, "Screw it, if I'm going to have to pay out of pocket to buy something else, I might as well see if I can fix this myself." While liquid cooled PC's are new to me, building PC's is not, in fact, this is the first pre-built PC I have ever owned. Every other computer I have owned for the last 20 years I built myself. I was pretty confident that with some YouTube University I could probably figure this out.

After much reading and video watching of how to flush AIO coolers, I decided to give it a go myself. And after removing the cooler and starting with dismantling the hot plate, I was in much dismay to see the same thing I had seen in YouTube videos from people who had busted ones.

The hot plate and.. whatever you call the part that the hot plate is mounted to had this strange, crusty yellow-white gunk on it and in and around the inlet ports and gasket. 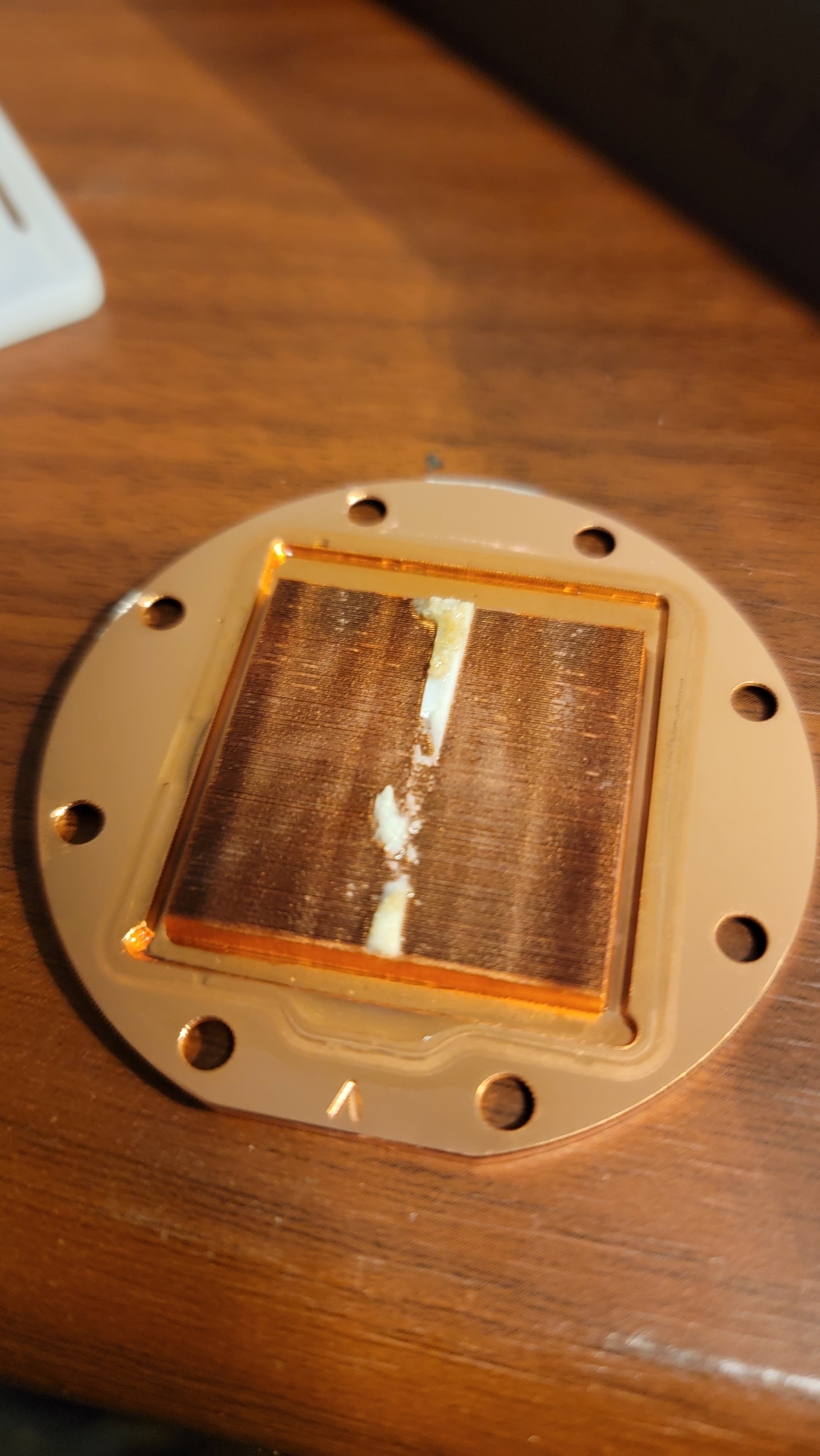 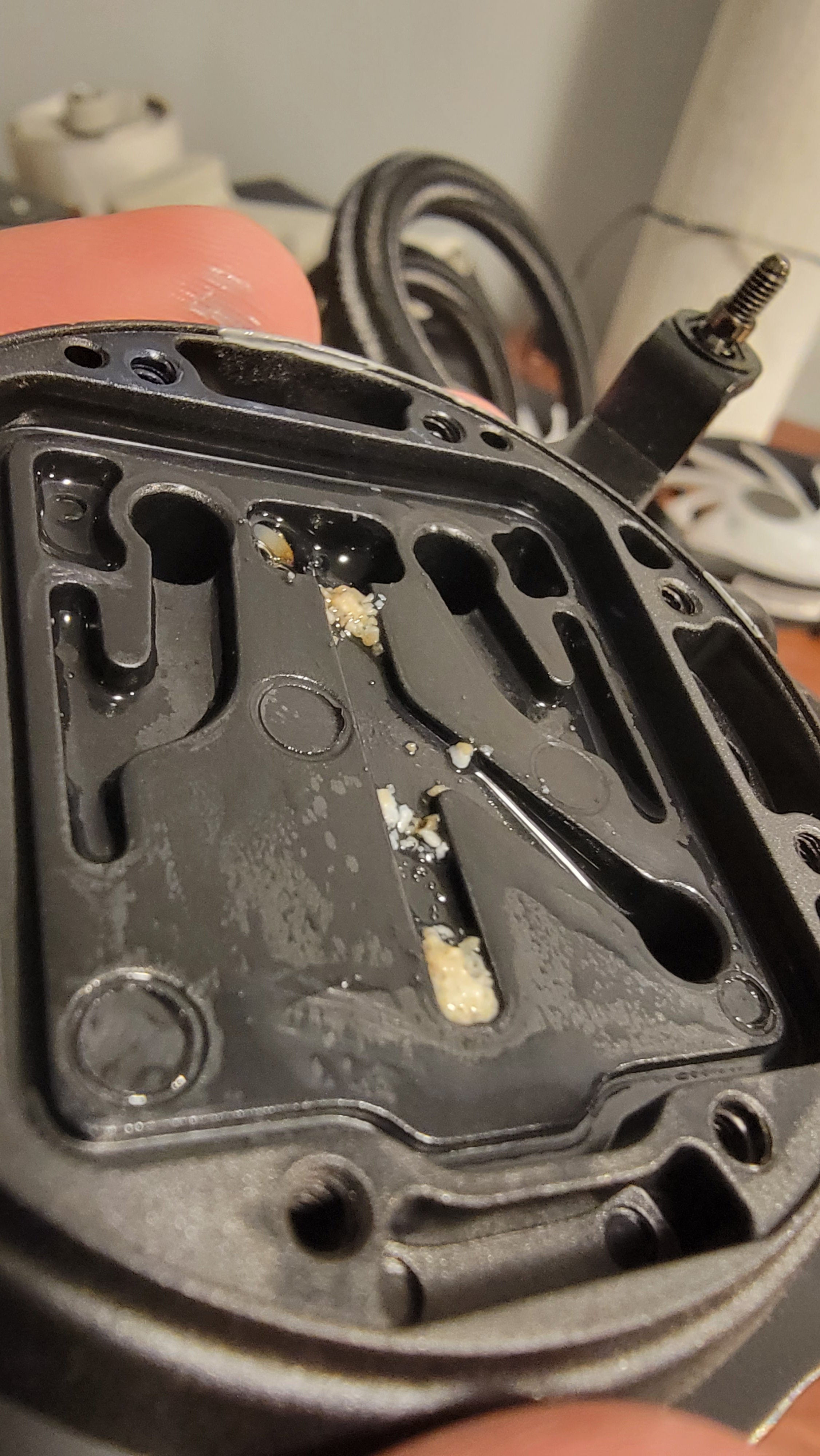 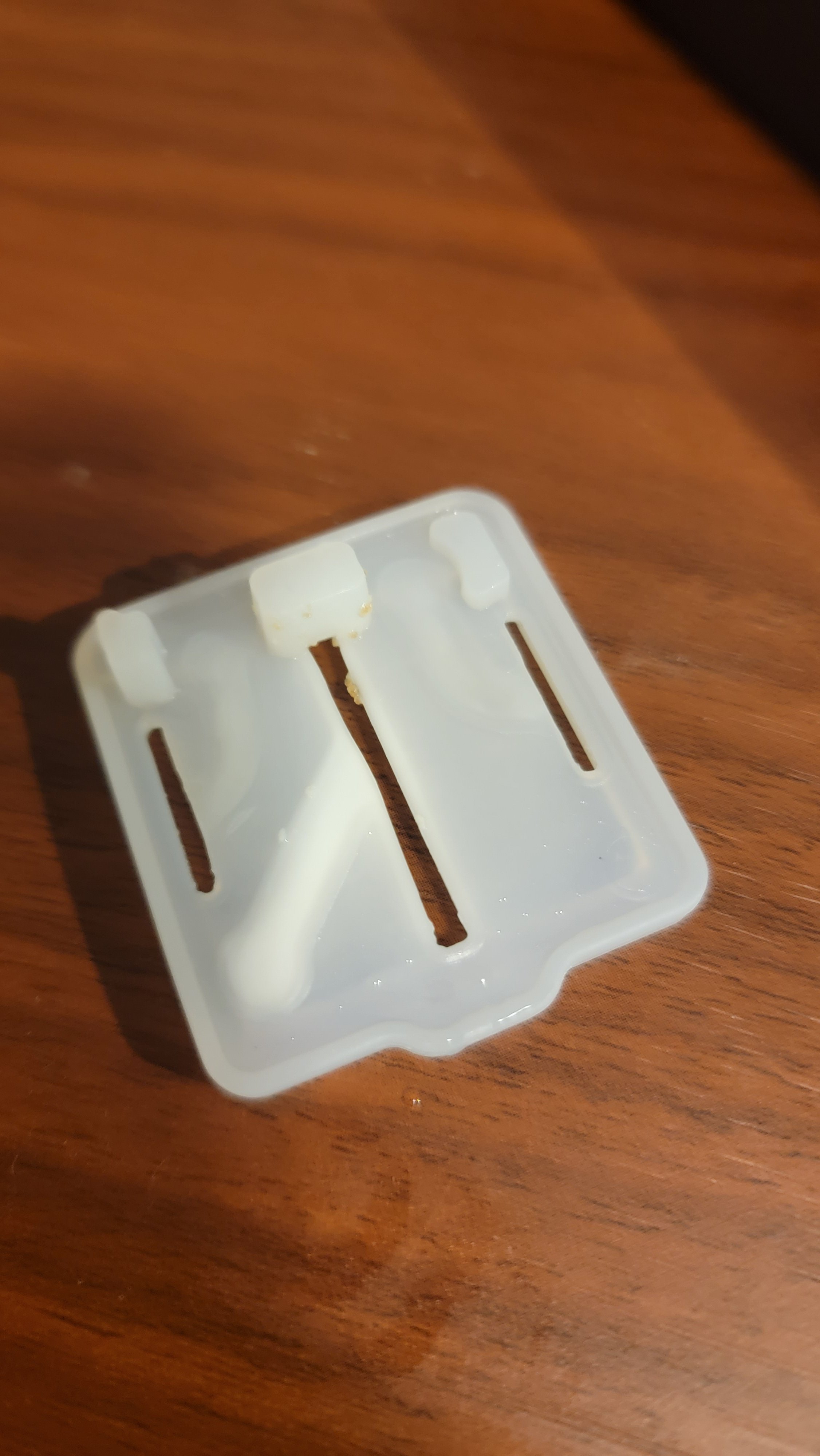 So after cleaning all that off, it was time to drain out the factory coolant, and let me tell you... what came out of this thing left me speechless.

All that gunk and sediment came out with the factory coolant. It was quite horrifying to tip the radiator up above the tubes and get a little bit of a trickle, then a gross sloshing sound, a little more came out, and after giving it a little shake, the rest of that stuff burst out of the ports.

Clearly, I had located my problem. It is obvious all this gunk was jaming up the tubes and/or impellor in the motor, restricting coolant flow down to basically nothing.

So I got to work filling it via the CPU mounting... cup... whatever.... using distilled water and a 10mil plastic syring. I was able to get about 110mils of distilled water into the radiator and tubes total, which is about the same amount of factory coolant that came out of the radiator. I shook the rad a little bit and turned it upside down and right side up to move the water before draining it.

This is what came out on the first flush. 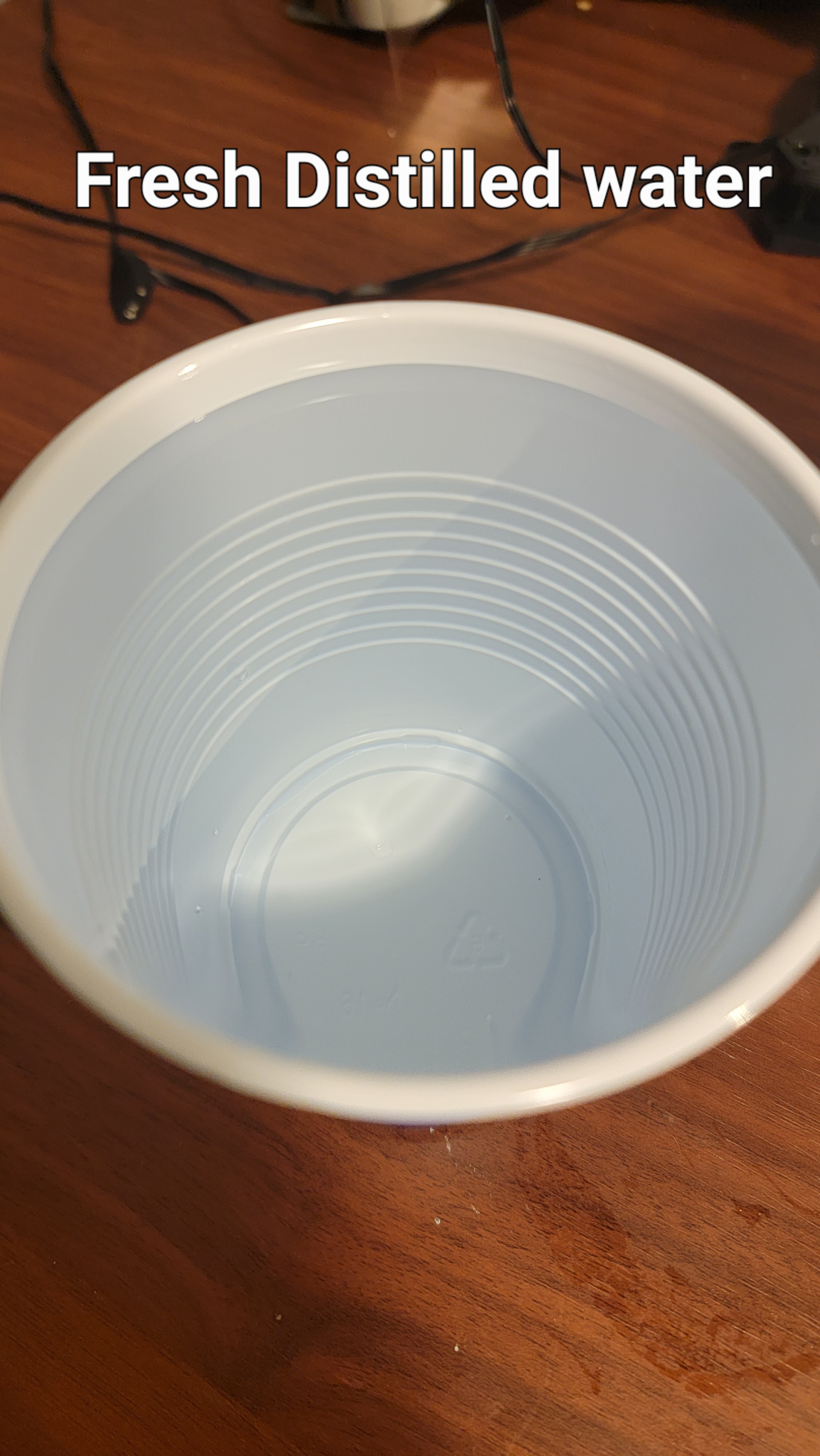 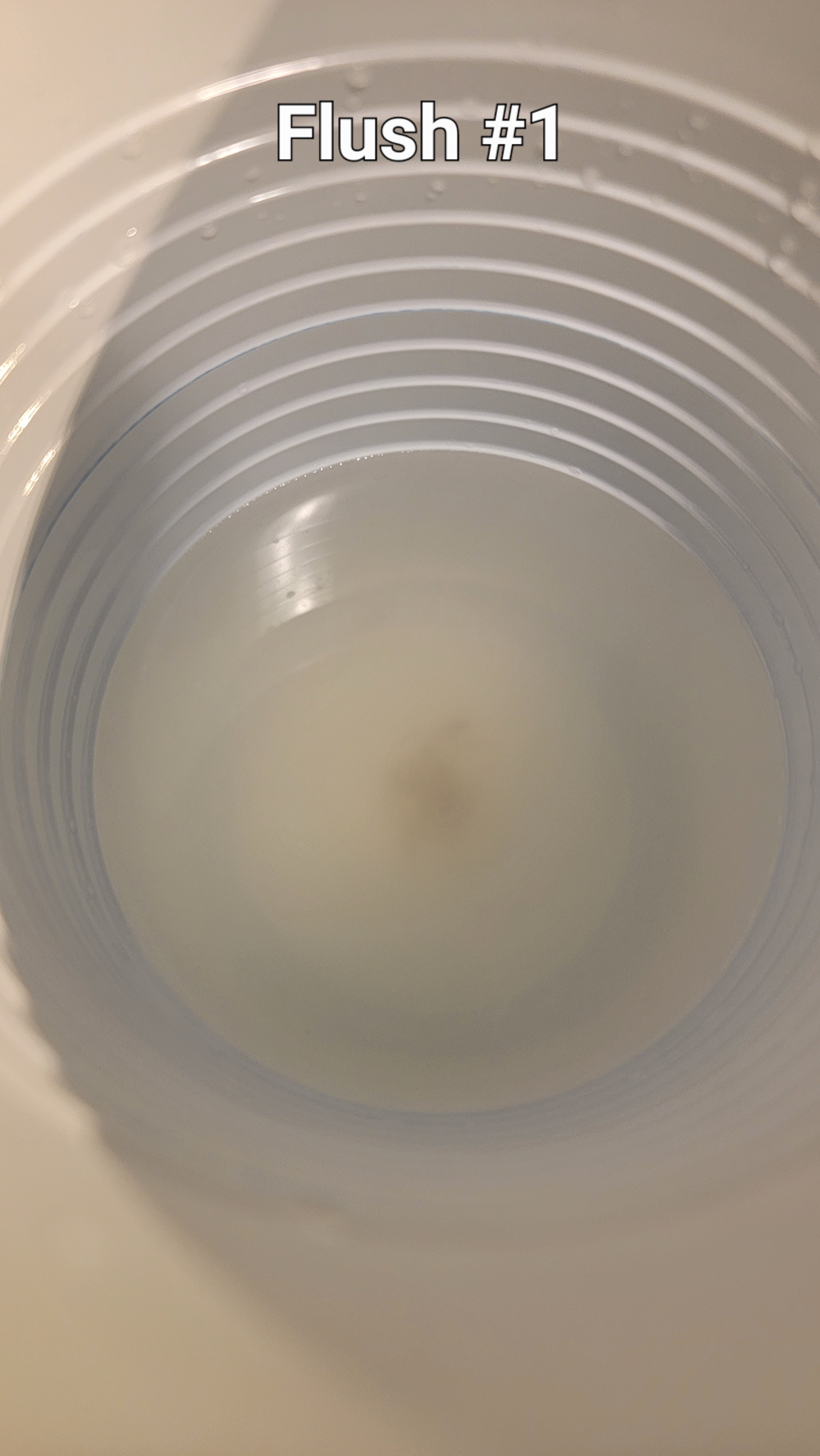 It's hard to see because the water that came out was so cloudy, but you can just make out some more of whatever that sediment is.

I went on to do this 5 more times. 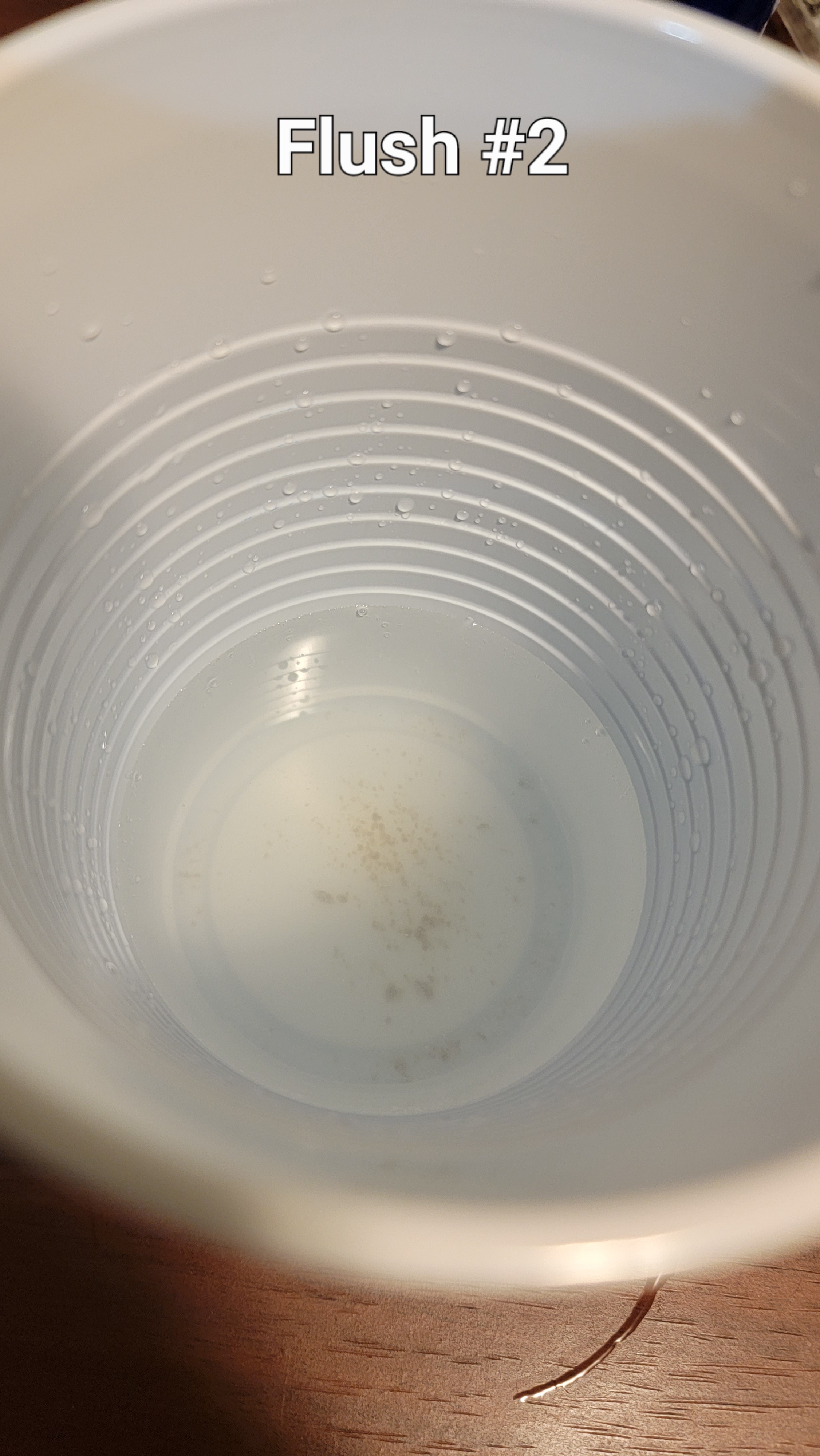 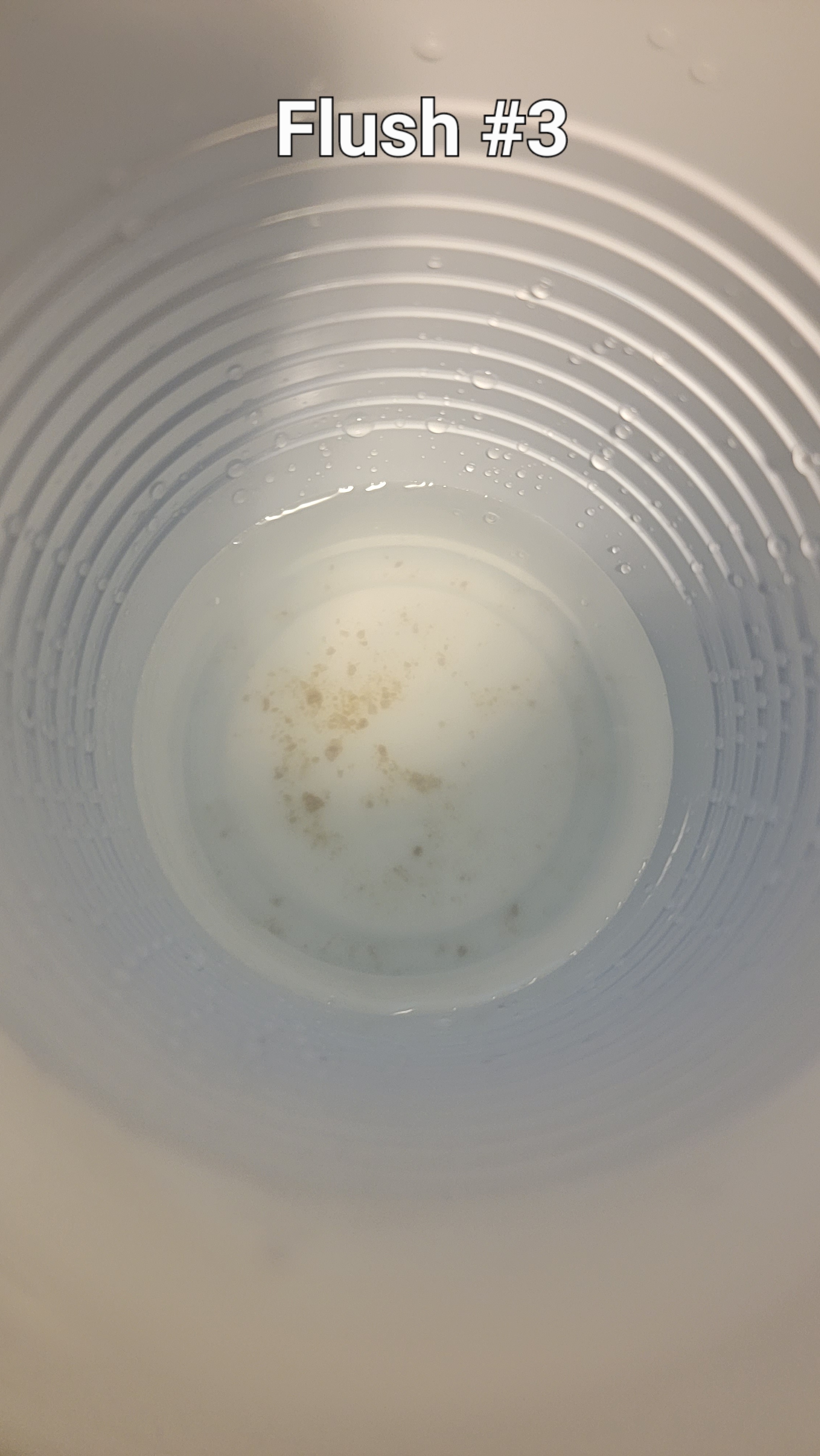 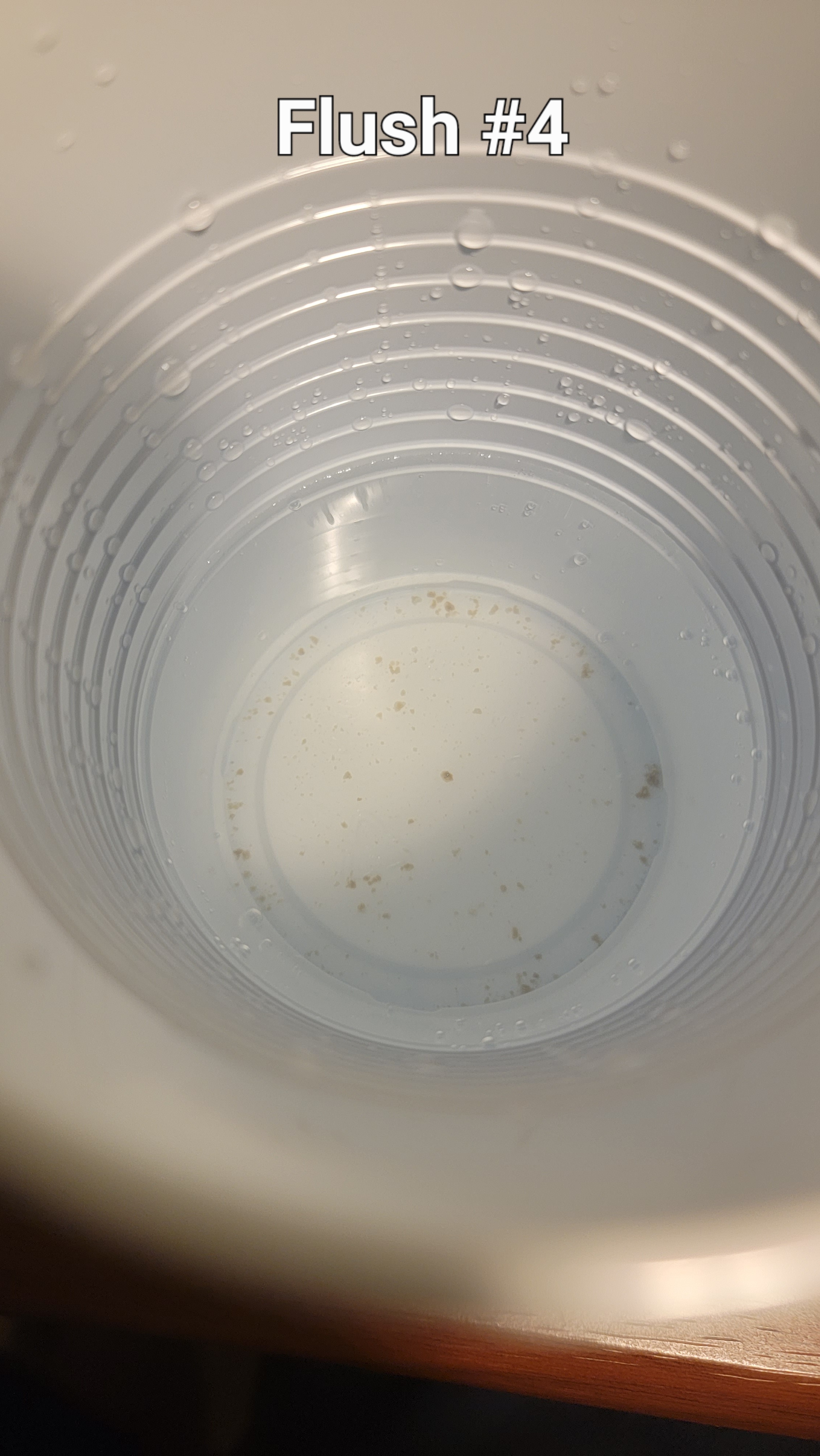 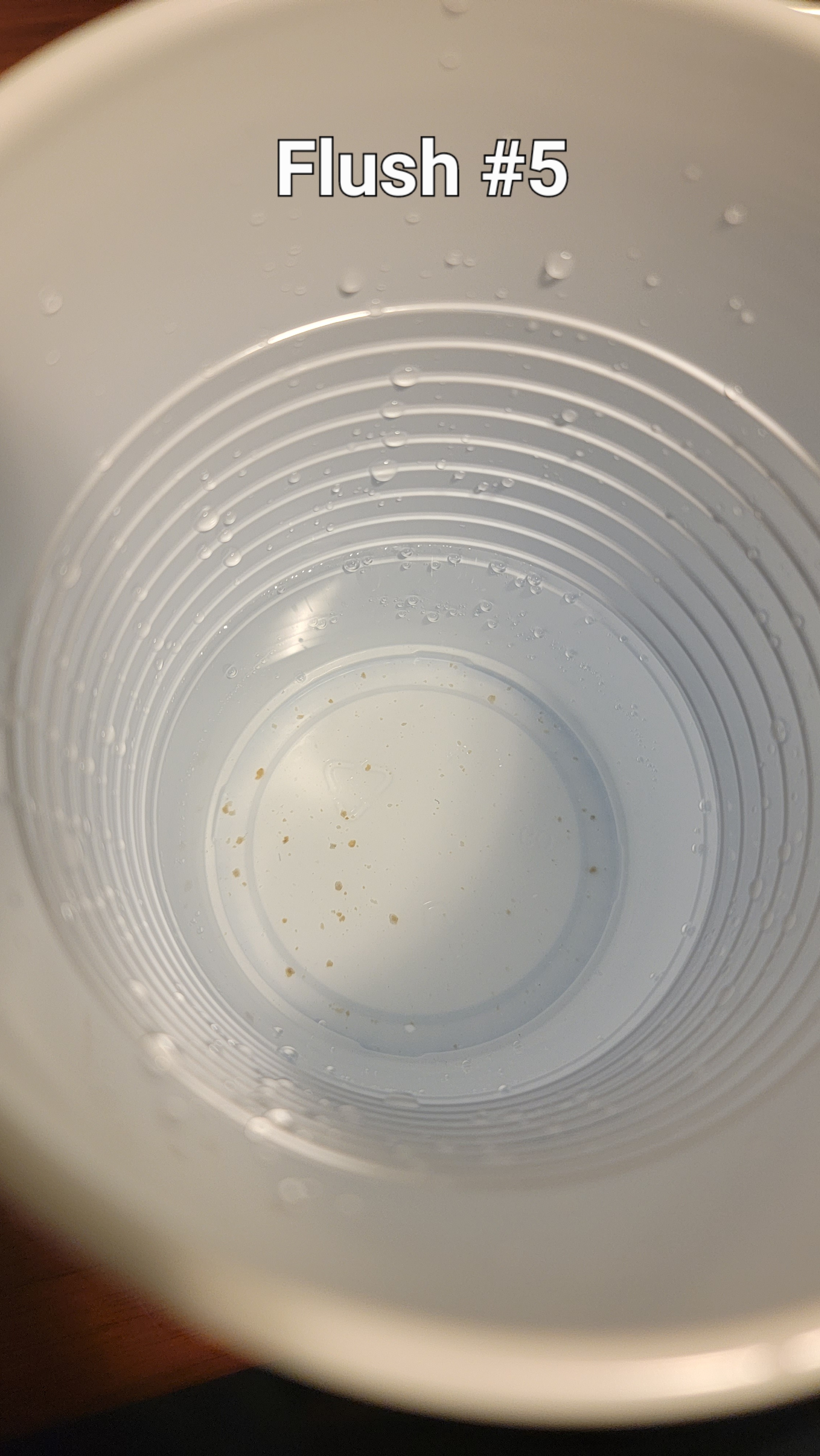 You can see as I continued to flush the radiator that less and less sediment was coming out and the water was staying clearer with every round. Eventually on the 6th flush there was such a small amount of gunk that came out and I was getting tired that I was satisfied any further flushing wouldn't result in much more improvement.

After reading a lot about the different brands of CPU coolant (and seeing how expensive some of them are) I settled on just using a 50/50 automotive mix (50% antifreeze, 50% distilled water) and filled up the radiator via the cpu mounting cup, making sure to move it around to let the coolant fill in as much as possible. Once I got about 120mil's of the coolant in, it was pretty much full. I gave it one last tilt and re-mounted the hot plate.

I installed the cooler back into the case exactly as it was from the factory, fired it up, and voila! No more jet engines, a little bit of crackling for about 20 seconds while the pump was settling into its new bath before going back to a near silent operation, and everything seemed right in the world... for me at least.

I fired up MSI Center to make sure it was reading all the pump and fan info (confirming that I had in fact connected everything back correctly) and was pleased to see that my idle temps were back down to normal, 28 degrees!

I gave it about 30 minutes for the coolant to normalize and now it's still idling at a cool 35 degrees and has been for the past hour while I've been piddling around and writing this post. 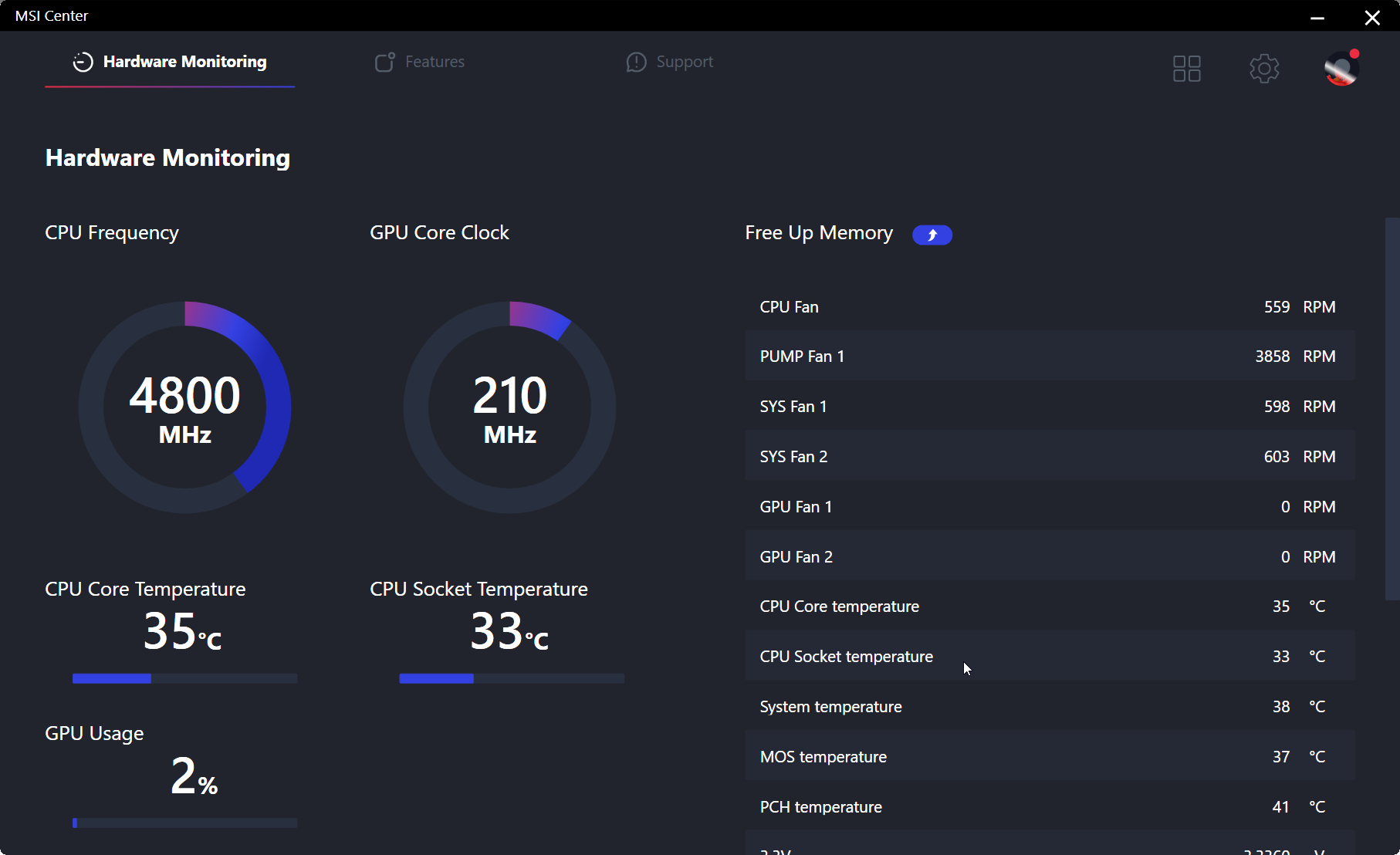 What a difference!! Full speed out of my CPU, CPU fan running at 1/4 what it was before and temps are (so far) stable at sub 40.

The kicker to all this, is before I remounted the cooler, I snapped a picture of the model and serial number. After firing everything back up, I checked the cooler recall again and low and behold, this cooler is apparently part of the bad batch. I was directed to submit an RMA.

So if you find your MAG CORELIQUID cooler is shitting the bed on you and you can't easily buy a new one or RMA it, give this a try, it's worth a shot!

Hopefully some people will find this helpful.