Hi,
two weeks ago i bought a motherboard MPG X570 Gaming Plus. I initially updated the bios to the last stable version (7C37vAE). I noticed that even the motherboard logo does not appear, a black screen hangs for about 10 seconds, and then the win10 system starts with MSI logo (UEFI, secure boot, tpm enabled). While searching the internet for information on similar topics, I found a post where they advised to update the bios, so the only newer version of the bios was the beta version of 7C37vAF3 from 2021-09-27. After updating I don't see the difference, still after turning on the computer I wait about 10-15 seconds before the msi logo appears but when loading the system, I never see the bios screen with the logo, only a black screen with the sign "_" in the upper left corner.
The processor I use is Ryzen 5600x, NvMe 500GB Samsung 980 PRO, MSI Radeon RX 480 Gaming X 4GB, RAM 2x8GBG. Skill Trident Z 3600MHz (F4-3600c16d-16gtzkw). UEFI, Secure Boot, XMP enabled on bios.
The computer works stably and I didn't notice any problems, I am surprised only by the long run of the bios.

What debug led shows when you experience this delay? 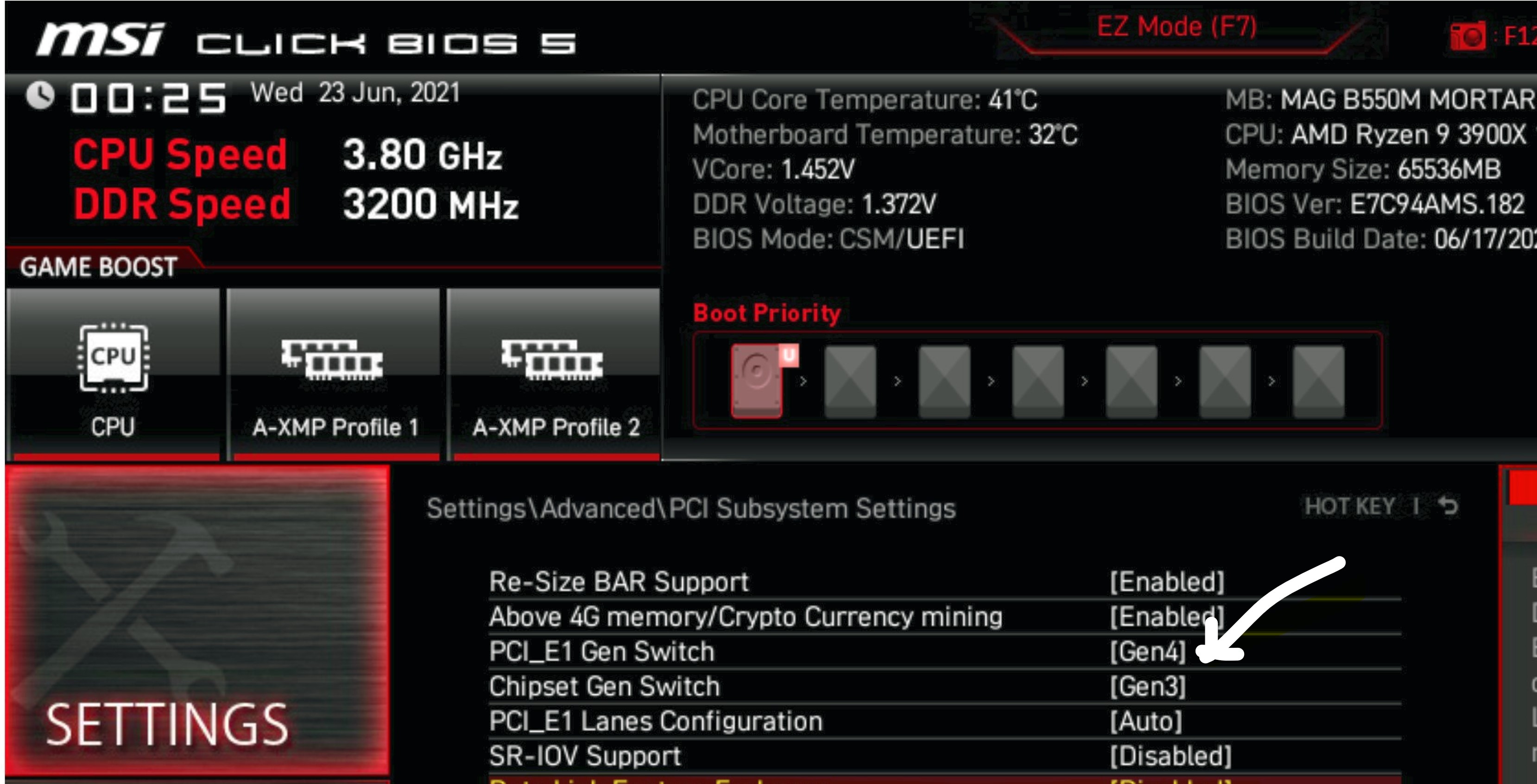 I changed but no difference
M

10-15 seconds delay to me seems pretty normal. In my case from the cold start there is approx 15 seconds delay (black screen, during this time I can see my keyboard and mouse being activated), being followed by about 2 seconds of hardware info screen (this is the only moment when I can access Bios and then immediately windows loading screen shows up. (With just restart it is shorter however: 10 seconds total until windows loading screen).

It's been like this from the very beginning. Bios updates did not change anything. Never seen motherboard logo (this could be also related to the type of the monitor and video connection - I heard), eventually turned logo off in the bios settings because it is actually another reason for the delay as it takes a moment to load this logo in the first place.

Based on info I gathered over time, AMD motherboards are pretty slow to activate and it also depends how many peripherals you have got connected and how you set up your boot order: if HDD or SSD with Windows System is later in the order this is going to cause another delay because your motherboard needs to check all others boot devices (USB, DVD-ROM etc.)

I hope this helps.

That would agree. Yesterday I read about these behavior of MSI motherboards and rather it must be ...
The first start-up of the computer - the black screen appears for ~20 seconds, if in the system I do restart I see blank screen for ~10 seconds.
On the computer I have a total of 6 disks (3x HDD, 2x SSD, 1x NVME) and an optical drive on USB + several devices on USB. In addition to the graphics card, I have a connected TV, which is not used by default, but the cable is connected.
Weird this modern technology, "old man" I7 3770K on Gigabyte H77 started ~3 seconds each time, no matter whether cold starts or restart. 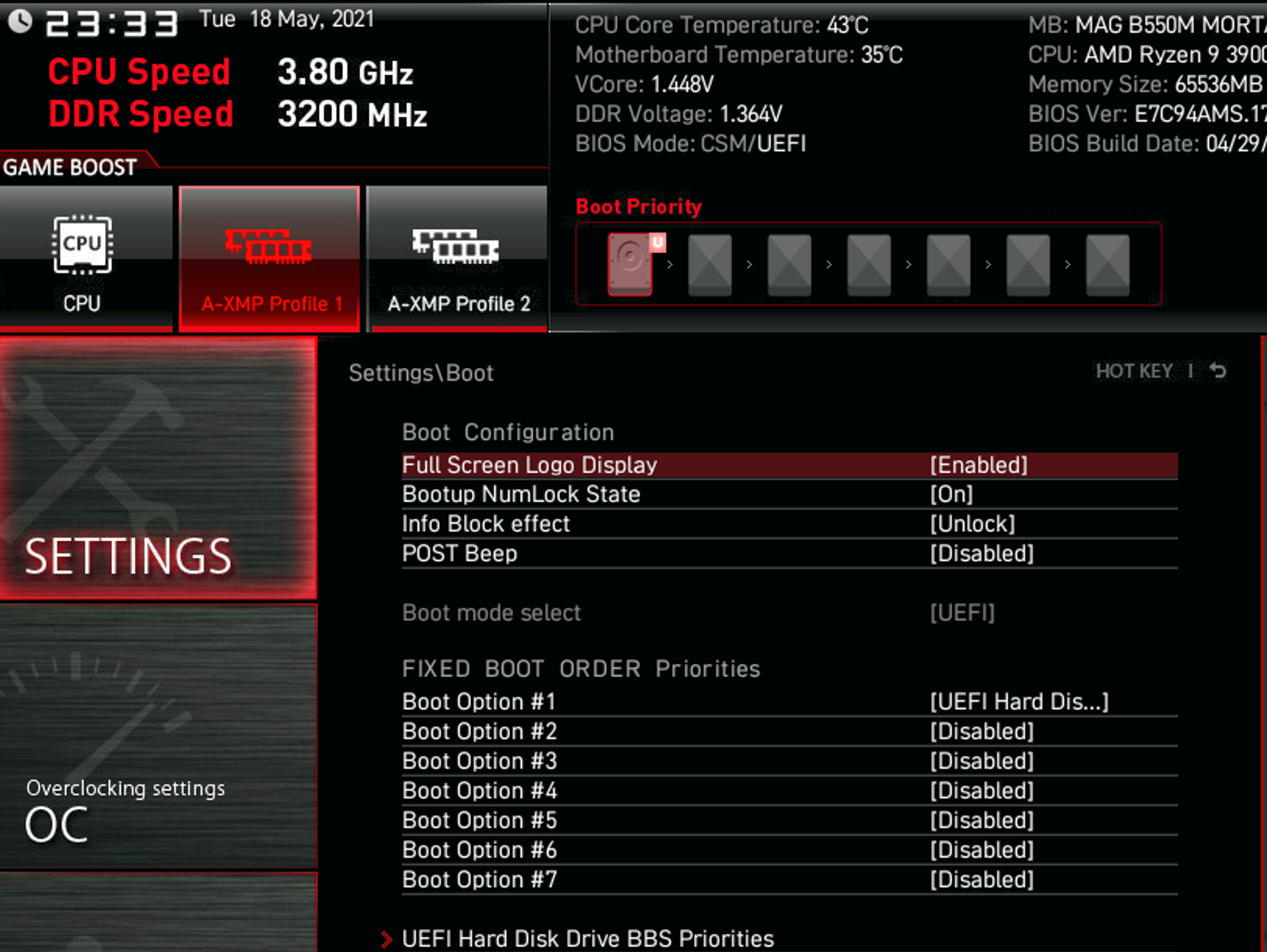 I only have UEFI hard drive and UEFI USB drive. I will check if I remove USB dive and leave only the hard disk it will be the difference.

CJ Grass said:
I only have UEFI hard drive and UEFI USB drive. I will check if I remove USB dive and leave only the hard disk it will be the difference.
Click to expand...

A great idea to change graphic for saving 10 seconds For now I will remain at my RX480.

CJ Grass said:
A great idea to change graphic for saving 10 seconds For now I will remain at my RX480.
Click to expand...

I was upgrading my GPU as I managed to snag a Sapphire on release for normal retail price was the last part of a Major PC upgrade from a NUC Hades Canyon with a e_Gpu to what I have now I , and noticed that after the upgrade my boot time was a lot faster. it is also a tad quicker if I don't use A-XMP but set RAM to 3200 and fabric to 1600 with ram voltage at 1.350 rest of ram setting at AUTO.