This last week I paid a king's ransom for a MSI Notebook that is in a league of it's own.
Also purchased from MSI direct a 1 year extended warranty for a reasonable price. (The price of this system warrants an extended warranty with the survey when registering your NB at MSI encourages you to do this as you get an extra 3 months warranty)
Intel i9 109900k 32Gb DDR4-3200 RAM, 2x512GB PCIe NVMe in RAID0, Samsung 860 Pro SSD replacing the existing mechanical drive. NVIDIA RTX 2080 super 8GB 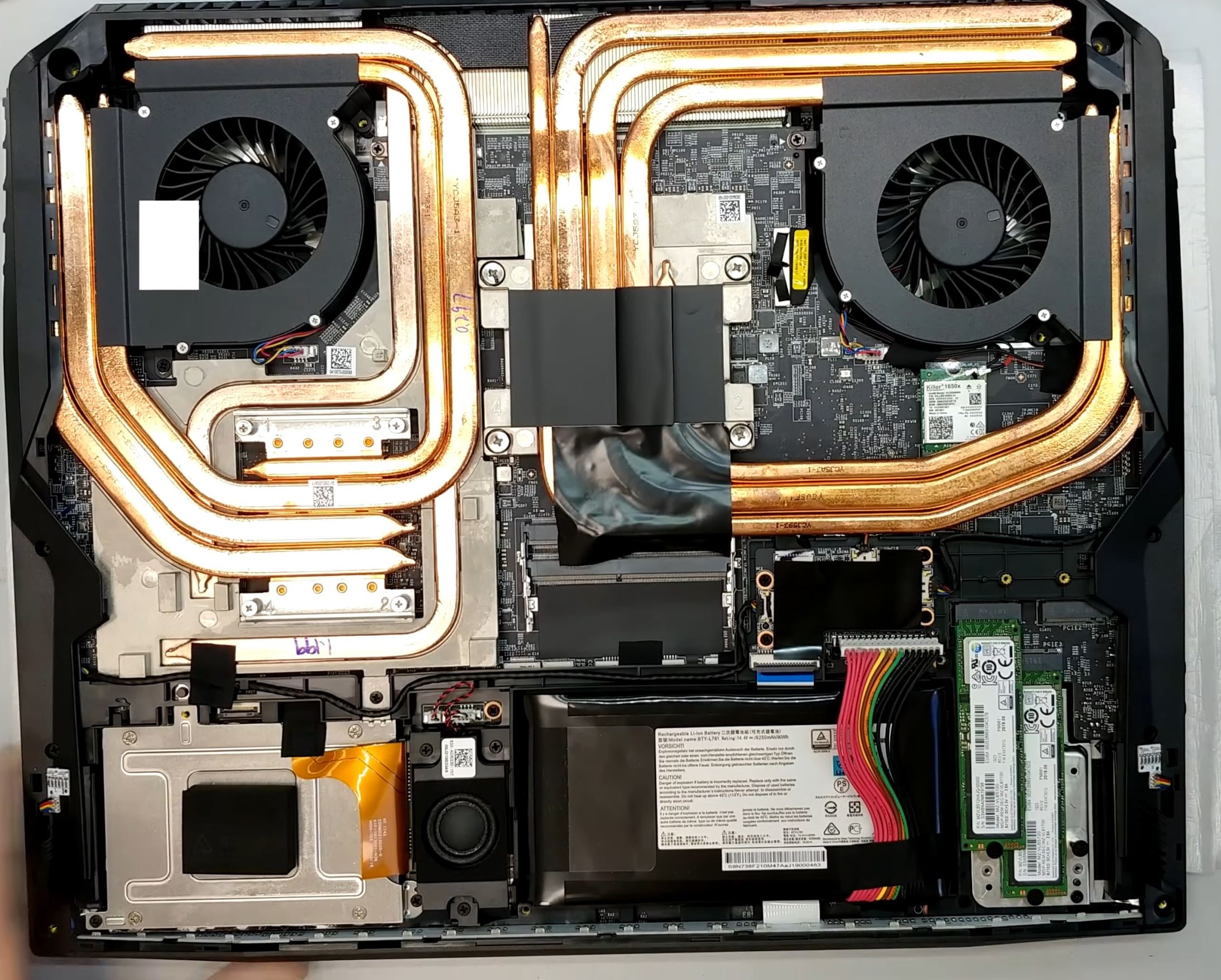 The first thing I noticed was NB is smaller in comparison to a MSI GT72s I have.
Then there is the setup.
Not really simple as the dragon gaming center you need to overclock and use other features is a battle to install. As for performance and NB temps I am sitting in a room that is at 34 Celsius and the CPU and GPU are running at mid 40 Celsius.
When running various Games I didn't go over 80 Celsius and stress tests I have done seen the cpu go to 98 Celsius and recover very quickly.
This system straight out of the box screams with its setup for up to 5.2 gigahertz processing and full throttle graphics reflects that back in the Dragon center once is properly setup.
I do have a question or query in this unboxing?
I have bought a Samsung EVO PLUS PCIe NVMe 2TB Sm.2 SSD and the below picture shows the existing PCIe Nvme SSD's in combo Raid 0 but there is third PCIe port and logically I should be able to install the NVMe SSD? 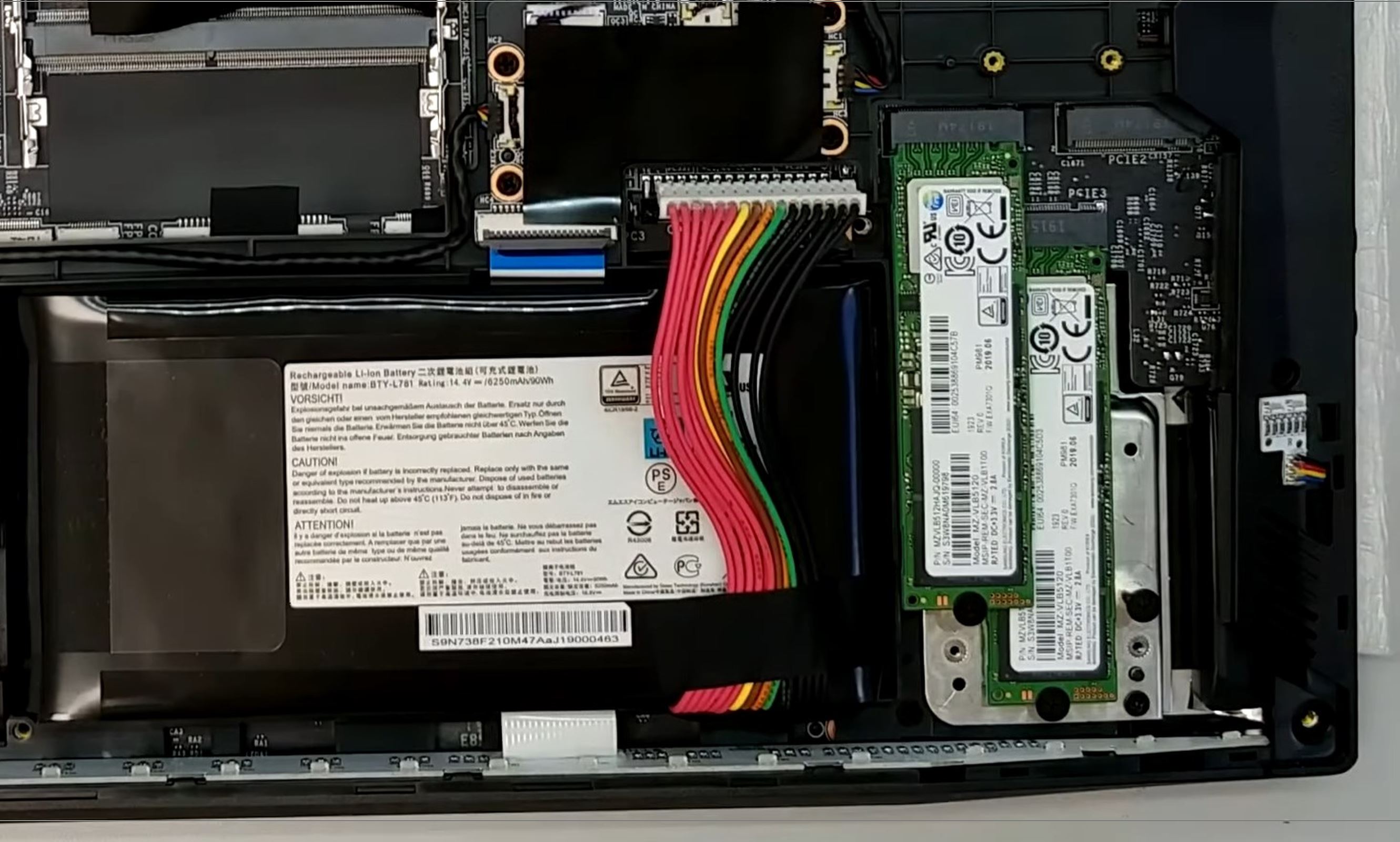 Noticeable things? Beautiful and very enticing keyboard arrangement with the Steel series Keyboard. (I also bought a Steel Series rival 650 wireless mouse).
Don't leave any usb device in the NB as it takes longer to boot/reboot.
Excellent and user friendly BIOS menu.
The updates had a bios update and that was a bit different as the procedure was as instructed but they don't tell you you have to reset the battery so the battery is charging as normal again.
It's been a learning curve at the beginning to get use to a 4k@60hkz environment in both windows environment and high end games because there is no refresh rate in the equation as everything is 4k.
SO, Played Battlefield V, Iron Harvest, Company of Heroes 2, Starpoint Gemini 3, all the halo master chief games and Age of wonders planetfall. All these games are easily played at ultra settings.
The power button is very flimsy and feels not right.
Once you hit the fan button the noise is intense and you can't hear a TV over it.
The fan vents at both sides of the NB throw a forced heat you could cook an egg with in ten minutes, especially on the right side where I have mouse and mouse pad.
Then there is the power system!
2 x 230watt power bricks into this strange looking dongle that has a high end adapter by where the power bricks plug into the device look rubbish and flimsy again.
The windows Hello setup was flawless and works every time.
The Steelseries shows colours on the keyboard when rebooting our booting up which I found strange ( so when does the Steel Series driver kick in?)
All the ports on the NB are very tight, when I plugged in a Thunderbolt Caldigit USB-c dock the connection is near impossible to take out for the usb-c port and same with the type A-USB ports.
The Samsung 860 pro 1TB I had in another MSI NB and the drive went straight into the new NB and previous test with rapid settings in samsung magician showed 6400MB read/writes, this system shows 9800 read/writes.
I am so looking forward to using this NB over the next 3 years and beyond I hope. Nice system MSI I am very impressed considering some small software problems.
Last edited: Nov 16, 2020

I bought this laptop on the 3rd of November 2020, on the 16th of November the laptop was a brick and was sent back for RMA.
REASON: The laptop wouldn't charge and the battery was drained and wouldn't start again when pushing the power button.
So a phone call and the RMA went like this.
Friday to Friday 1000km change around and a " power converter" was replaced. plus they installed a Samsung EVO plus 2tb PCIe NvMe m.2 SSD for free that I sent in the package and they also left all the games I had (700GB) on the other drive I had in the laptop and reset the system.

I was wise to buying a MSI laptop again and spend the extra monies for an extended warranty because in the long run you have a system that is protected for a reasonable amount of time. (3yrs plus 3 months warranty if you do a survey for MSI.)
Kudos to Wayne and Christina in Sydney Australia MSI who take care of their customers. They are very good people.