whats the problem with Light Gen 4 m2_1 slot in this mobo?
tried to put SSD in Light Gen 4, it's undetected
then i put the same SSD, in another m2_ 2 socket it's work fine

It should work in both slots, could you try M2_1 slot again and make sure it is well inserted?
What BIOS version are you on?
N

Try to Again, same result.
already flash bios with 7C56V11. the latest from the website.

is it because display port? (I'm not using hdmi?)
looking at others thread that said x570 can't detect SSD from WD because using DP.
(but i don't have hdmi adaptor. so i haven't try it)

or is it because the ssd? ( i used it in another m.2 slot and its working)

I don't think the BIOS will have much to do with it, if I'm honest.

Have you tried to set the PCIe port to Gen 3 instead of Gen 4 or AUTO? Maybe it just isn't properly running at Gen 3 speeds, and that's why it isn't detected.
N

yup did tried set the PCIe port to Gen 3. and the problem still exist.

maybe m2 connector or my cpu doesn't support the ssd (the last thing i'll tried is replacing the cpu).
will try another ssd gen4 (in the future). but in the mean time i will use only the chipset m2_2.

thanks a lot for the advice.
K

I have the same problem, but with the B550 Tomahawk.
N

maybe the new SSD didn't supported by the MSI. You should open a new thread about it. so the forum will more actively acknowledge there was a problem in MSi B550 M.2 CPU Socket.

fatedust said:
Yes, give it a try.
Click to expand...

Yup will give it a try(but in next cpu upgrade. probably after 2-3 year). right know, i don't have the resources for giving it a try.LMAO. 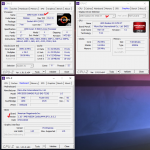 Try use HDMI cable instead DP cable and retest
H

whats the problem with Light Gen 4 m2_1 slot in this mobo?
tried to put SSD in Light Gen 4, it's undetected
then i put the same SSD, in another m2_ 2 socket it's work fine

You would have to create a simple partition for the unrecognized drive. Under disk management in the control panel it will show all your drives. Even if it doesn't show up in the BIOS. Once you decide which storage it is you will need to right-click it and create a simple volume. There you will designate the drive name(letter) and the space. Let it format the new drive in NTFS and then you can view the change under This pc when it shows all drives connected
You must log in or register to reply.
Share:
Facebook Twitter Reddit Pinterest Tumblr WhatsApp Email Link
Top