Hi, I a owner of 2 MSI X570 Gaming motherboard, they both have leaky VRMs.... When I say leaky, I mean a black fluid comes out of some parts and spill over the motherboard.
I do have proper cooling and monitor closely board temperatures. I find the VRMs tend to run hot on the 90c end when running AAA games with top end graphics cards.

Can you make photos?
C

Here a picture of what im talking about, Im in the process of RMA as it died on me today. CPU wont boot, hoping this did not damage my 3090ti , my Ryzen 5950x AMD cpu

If you need more pics, I can provide. 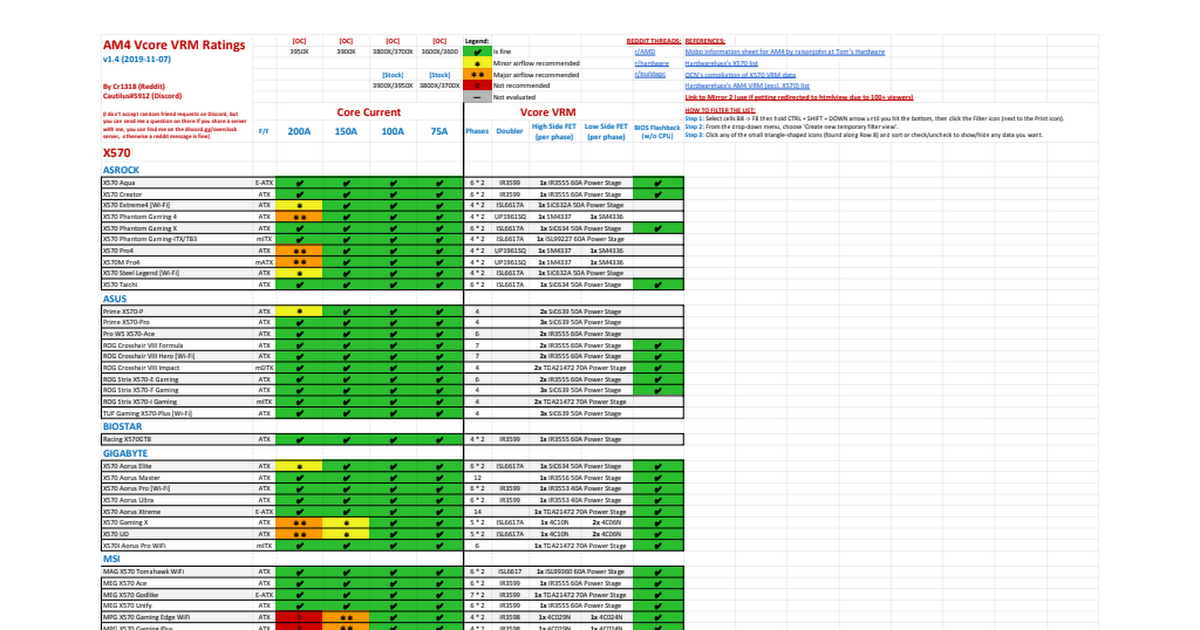 Four doubled phases for the CPU, consisting only of cheap discrete MOSFETs (8x 4C029N Hi-Side + 8x 4C024N Lo-Side), and two non-doubled phases for the SoC. And they really just doubled the MOSFETs, not even the chokes. So this board was not truly designed for a high-end CPU like the 5950X. That setup might have been alright, had they used good Powerstages for each phase.

Since powerstages are among the most expensive components on a mainboard (they can cost upwards of US$10 each for high-quality one, and you need a bunch), naturally that's one major point for the manufacturer to save money when designing the budget boards. A simple MOSFET on the other hand can cost just a dollar with the amount they order. MSI simly trust on users pairing lower-end CPUs with a lower-end board model and higher-end CPUs with a higher-end board model. This is how they can even offer cheap board models to begin with. They cut down on the VRM capabilities to keep costs low, because as i said, those can be really expensive components.

So on the cheap boards, they like to use these discrete MOSFETs for the Hi-side (12V side) and Lo-side (~1V side), using simple 4-layer PCBs (or maybe 6-layer if they're generous). But discrete MOSFETs have considerably higher switching losses, so you get way more heat from the VRM. Each time one of the MOSFETs switches on and off, you have energy turned into heat, more than with a single powerstage which combines the components for more efficiency. And the more power your CPU model draws, the hotter the VRM, of course. At the same time, the less layers of the PCB can't get rid of the heat so well through the PCB either.

This all means that the board was designed to provide the X570 feature set for entry-level to mid-range CPUs. That's why it's good to pair each CPU model with the appropriate board model.
It certainly doesn't help that you have a 3090 Ti dumping its heat into the case as well.

To me, it looks like you went for nice components everywhere, except the mainboard model. I would go for something like the MEG X570S Unify-X Max, or maybe the MPG X570S Carbon Max WIFI.
This is in line with the 5950X, the absolute top dog CPU, which i wouldn't pair with an entry-level X570 board. The CPU and the board always have to match to a degree.

clearchrom157802df said:
Here a picture of what im talking about, Im in the process of RMA as it died on me today. CPU wont boot, hoping this did not damage my 3090ti , my Ryzen 5950x AMD cpu
Click to expand...