Hi,
I think i finally got the overclock that i needed to run Chivalry 2 Maxed graphics with my 6700K and 3080ti !
But i'm not sure this is 100% safe since i leave many settings to "Auto" in the bios. VID looks strange compare to what i had by the past.
If any expert could tell me if there is a problem in what they see here, it would be greatly appreciated! 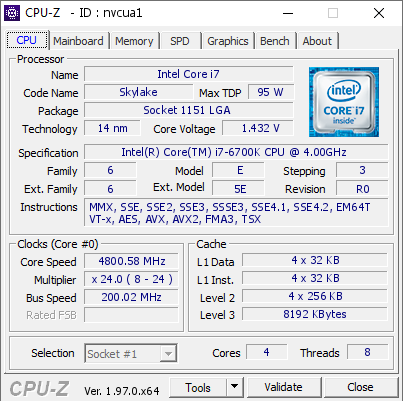 Well, of course it's not 100% safe, it's overclocking, that can by definition not be 100% safe. You can just make it reasonably safe. You're using a very high VCore (or you let the board set it like that) and a fixed 48x multiplier (edit: no, 24x with BCLK 200) even for all-core load, by the looks of it. This is quite ambitious for a 6700K, i would say it's near the maximum that this setup is capable of. So i don't know wether to congratulate you for the high OC, or warn you that this might not be very safe. Also, by using a fixed multi, you're not using any power-saving mechanisms anymore, your CPU is idling at around 30W when it could be 10W. Not to mention the power consumption under load of course, but since you didn't put the system under stress for the sensor screenshot, i can't see the power consumption and temps under load. Plus it would be good to know your CPU cooler.

Can you make a screenshot of HWinfo64 "Sensors" with all sensors expanded (click on the little <--> arrows on the bottom)? Preferably let it run a bit while in idle, so we get some "minimum" baselines for the values. Then you can run full load like Prime95 torture test for example and make a screenshot after the temps have stabilized at the highest level.
Last edited: Oct 20, 2021
L

I'm using 200x24 recommended by "anandtech" for high frequency ram.
Vcore 1.45V Dram xmp Memory "try it" Samsung 3600Mhz
The cooler is a custom loop, the cpu is delid so it never pass 70°C
I was just curious about this VID.

Since i plug the 3080ti my overclocking was failing, so here i am with a better one maybe.
Is it possible that i can use "Sleep mode" with windows 10 ? Last time i tried my pc won't start and it reset the bios.

Thanks for your expertise, greatly appreciated !

Oh ok, you're base clock overclocking too, i missed that detail. Because with modern platforms it's pretty much impossible. BCLK 200 instead of 100 MHz and then fixed 24x multi, gotcha.

100W, that's not nearly as bad as i thought, but surely this is not Prime95 you're running? With full AVX load i expected double that.

Also, can you make a screenshot of the expanded sensors in HWinfo64? I explicitly linked that program because it shows the data in a different way and also includes more data. I'm hoping it also shows the voltages more clearly, all those "VIN" voltages aren't really telling anything.
L

Still not what i wanted

Close this HWmonitor. In HWinfo64, click on "Sensors", then on the bottom, click on the arrows to expand the sensor windows until you see two or three rows.

Wait until the temps have stabilized on a high level (the cooling needs to saturate with heat to get a proper maximum temp number).
L

Oh well, hope this is what is needed !

Thanks for your patience

Yeees, see how all the voltages have proper names now? That's why i always use HWinfo64.

The only problem now is, you haven't run Prime95 in the background for some time. So maybe we can get it all perfectly together in the next screenshot.
L

Got error at 10 minutes.
Is there a possibility i can fix this ? I was playing chivalry 2 for hours long with no issue.

Until you see the temps leveling out at the maximum, meaning, they don't rise any more for a couple minutes. That's when you know your cooling is saturated enough with heat.
L

I have edited my previous message with a screenshot that shows 77°C.

The pump is running at his lowest speed so the computer makes no noise.
Maybe i should tweak this more more cooling capability?

Let's see the status quo first. I can already say, i'm amazed that this OC'd CPU is sitting at 100W in Prime95, are you sure you are using a recent Prime95 version and have not disabled AVX?
L

i don't know what is AVX, and yes this is prime95

Oh wait, you got an error? Yeah that's not good. The temps are not critical yet though. It's just that your OC might be too ambitious and you either need yet more VCore for stability, or lower the OC.
As i said initially, this is a very high all-core OC for this CPU.
L

I'll be back with screen shot and a long Prime95 stress test. then

Thanks again for your help.

In the BIOS, under Overclocking, can you expand the "Misc Setting" option? The AVX offset option should be under there. AVX means Advanced Vector Extensions, it's an extension of x86 instructions (basically, what kind of code the CPU can understand). If a software uses AVX instructions, the CPU will go into a special mode where it consumes much more power. So much so that you can set an "AVX Offset" with a lower multiplier for software using AVX code. That's why i'm so surprised that your CPU is still at 100W power consumption, because Prime95 uses AVX code (but it can also be disabled in Prime95). I want to get to the bottom of this.
L

I'm going to check that !
L

Oh ok, it's not there. I should check if the BIOS has AVX options somewhere, i have a PC with a Z170A GAMING PRO CARBON with a 6600K sitting in a cardboard box here. But i'd need to set it up first. However, this would give some relevant baseline numbers too, especially for power consumption in Prime95 which is suspiciously low for you, as if AVX was disabled. I can do that tomorrow, i'm probably busy later today.
L

But is it better for gaming purposes?
And the Real Question is : My cpu will give me enough to play Bf 2042 full Maxed ?
Is it possible to setup "Sleep mode" while keeping the overclocking settings ?
And maybe i can push this to 5GHz ?