160W is more in line with what i expected. There was definitely something weird going on before with such a high all-core OC using only 100W in Prime95. But again, i don't know if i should congratulate you for this or tell you that you are using 60% more power to get the same OC frequency stable?

You also increased idle power consumption again. The CPU is now wasting 50W when there's nothing to do. It doesn't come out of the C0 state (bottom line of the left sensors) into the deeper C-states like C6 for example. The C-states are power-saving CPU states. Under Overclocking -> CPU Features in the BIOS, you can enable Intel C-State.

I don't really know what i am doing tbh, but the result is that. On stocks voltage/frequency i got fps drop to 60 in chivalry 2, after setting this it goes to 90fps at lowest.
I wish i could find a "sweet spot" but it looks way too complicated for my knowledge.

i tried to setup some of the power saving fonction, i don't know if it is realy efficient, i see 170W on the Electricity supply box compare to the 220W i had previously, it's still close to the same in my opinion. Maybe there is something more to do, i have no idea.

Anyone can overclock by just following a random guide like you did. But two major points have to be considered:

Stability has to be ensured, and not just today, also under worst-case conditions like hot room temperatures, which means you have to have a stability headroom and not be "on the knife edge".

Power consumption (and the resulting heat) / calculation efficiency. Each CPU manufacturing process and technology results in a CPU generation that has a specific "comfort zone", that is, a frequency range that it can achieve without excessive voltage (so the efficiency is high). When you force a CPU generation above the comfort zone, as Intel has done on the high-end models of the 10th and 11th gen CPUs for example, there simply isn't any headroom left for sane overclocking. They force 5 GHz or slightly higher on a technology that is most happy in the mid-4 GHz-range. Because otherwise the CPUs wouldn't be able to compete with AMD. So those CPUs are too far up on the voltage-per-frequency mapping at stock. On AMD it's a bit different, they have more (and more efficient) cores, so they don't need to go that crazy on the frequency. But at least since the 3000-series, they optimized the different turbo modes very well, to use a lot of the potential of each CPU already at stock. So even there the headroom for OC got smaller and smaller.

For each CPU model, there is a curve such as this: 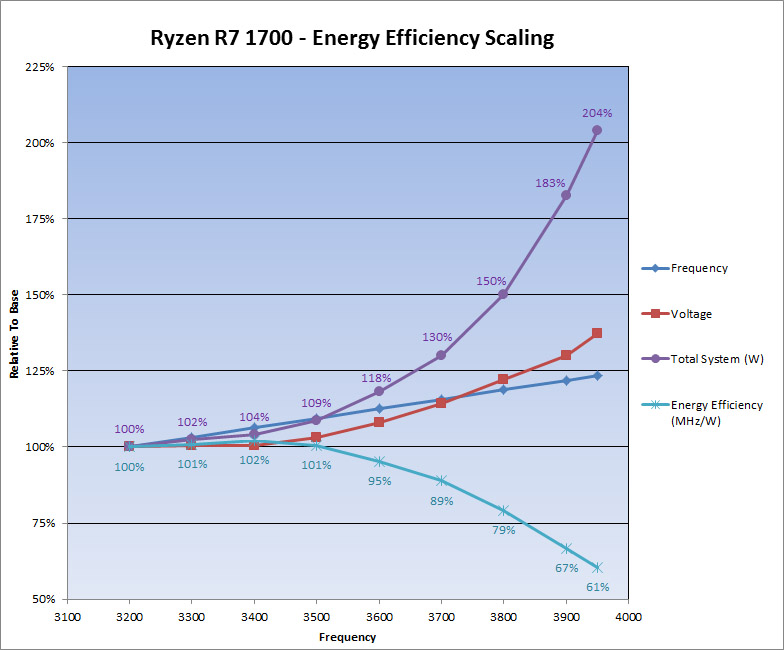 Take a second to understand it. You see, you gradually have to raise the VCore more and more to reach a higher frequency, taking bigger and bigger steps of voltage to add.
With higher VCore, the power consumption starts to increase exponentially, and the enery efficiency starts to decrease exponentially. Performance scales much slower than those two.

With CPU models, the newer and the more high-end it is, the steeper the increase of the curve, so the 100% mark (stock setting) will be further towards the right. With almost all the most modern CPU models, as i said, overclocking is pretty much useless, since they use 99.9% of their capabilities with all the different turbo modes, and use very agressive frequencies at stock. Meaning, they're at a place on the curve which was previously only reached in an overclocked state.

Your CPU is a bit more old-school however, so they still left more headroom back then. Which is good for OC, as it can still be useful with such a CPU. But then again, you went with an aggressive overclock frequency, especially for all-core load. It would be different to set 4.8 GHz for single-core load only and use a a lower frequency for all-core load, but you went 4.8 GHz, period. Because of this, it's quite far right on your CPU's curve, so you have pushed the power consumption and you have lost energy efficiency.

Now it's up to you: Does it hurt your energy bill if the CPU draws maybe twice as much as in stock mode? Just an example, if you left the PC running in idle 24/7, and the CPU draws 50W just sitting there, that could add 100-150 EUR per year on the energy bill, so around 10 EUR per month. At the very least, i would try to sort that idle power consumption out. It makes no sense to have the CPU be in the fully alert C0 state all the time when there is nothing to do. It should enter a deeper C-state and then it can wake up in nanoseconds when there is work.

Another consideration is if you can live with the heat output, but you got that covered, it seems.
L

Play test on chivalry 2 with any c-states enabled, everything is smooth, looks like a fresh new computer.
And saving 10Euros a month is welcomed!
This place is the very best i found on the internet to solve my computer issues.
I am very grateful for your help !

So, here we go, some reference data from my 6600K. First off, the BIOS settings i use. BTW, there are really no AVX options in the BIOS, they only added those on later board generations. Anyway: 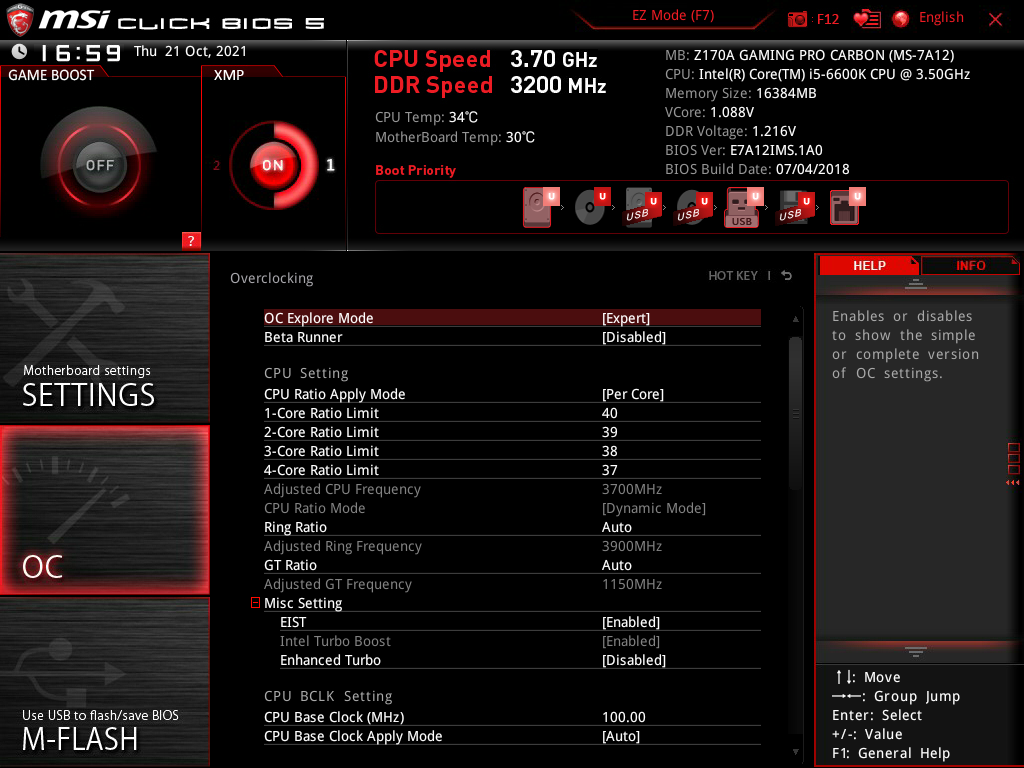 What you see here are different per-core overclocks. Just like Intel does with their Turbo Boost. This is so you can overclock better, so you can use a lower VCore, and so the power consumption doesn't go out of hand. Obviously, the more cores are fully loaded by a multithreaded software, the higher the power consumption, and the more stress for the CPU, VRM and so on. So with all Intel and AMD CPUs, the more cores are loaded, the lower multiplier is used. Even when overclocking, i would adhere to that strategy, it makes sense. 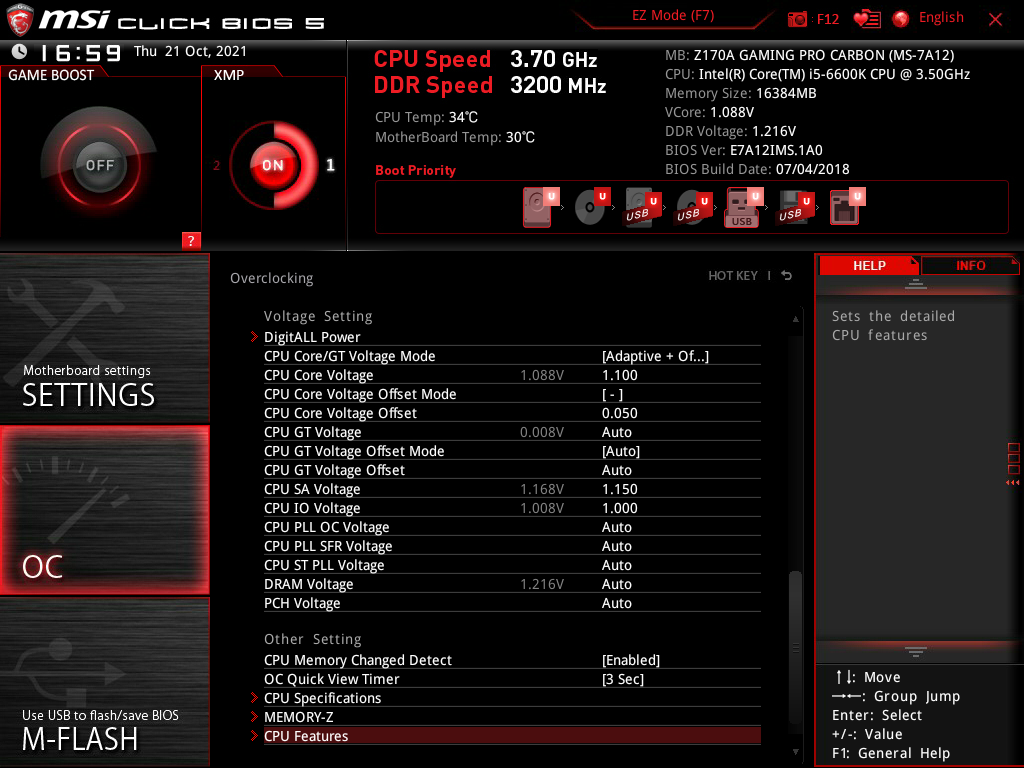 Here you can see my method for the voltages. I use Adaptive + Offset. But instead of adding loads of voltage, i actually set a pretty low voltage, and then i even apply a negative offset to that voltage. So i optimized the VCore to consume less power than at stock settings, while simultaneously increasing the frequency a bit over stock. Win-win situation if you think about efficiency.

Furthermore, i locked SA and IO voltages to lower levels than Auto would've choosen, because MSI on Auto applies too much voltage for those. Of course i triple-checked everything here for stability, and also left a safety margin in the voltages. For example a VCore offset of -0.1V would not work, but maybe -0.08V was stable. Then i still only set -0.05V to have some stability headroom.

So what does this all achieve? 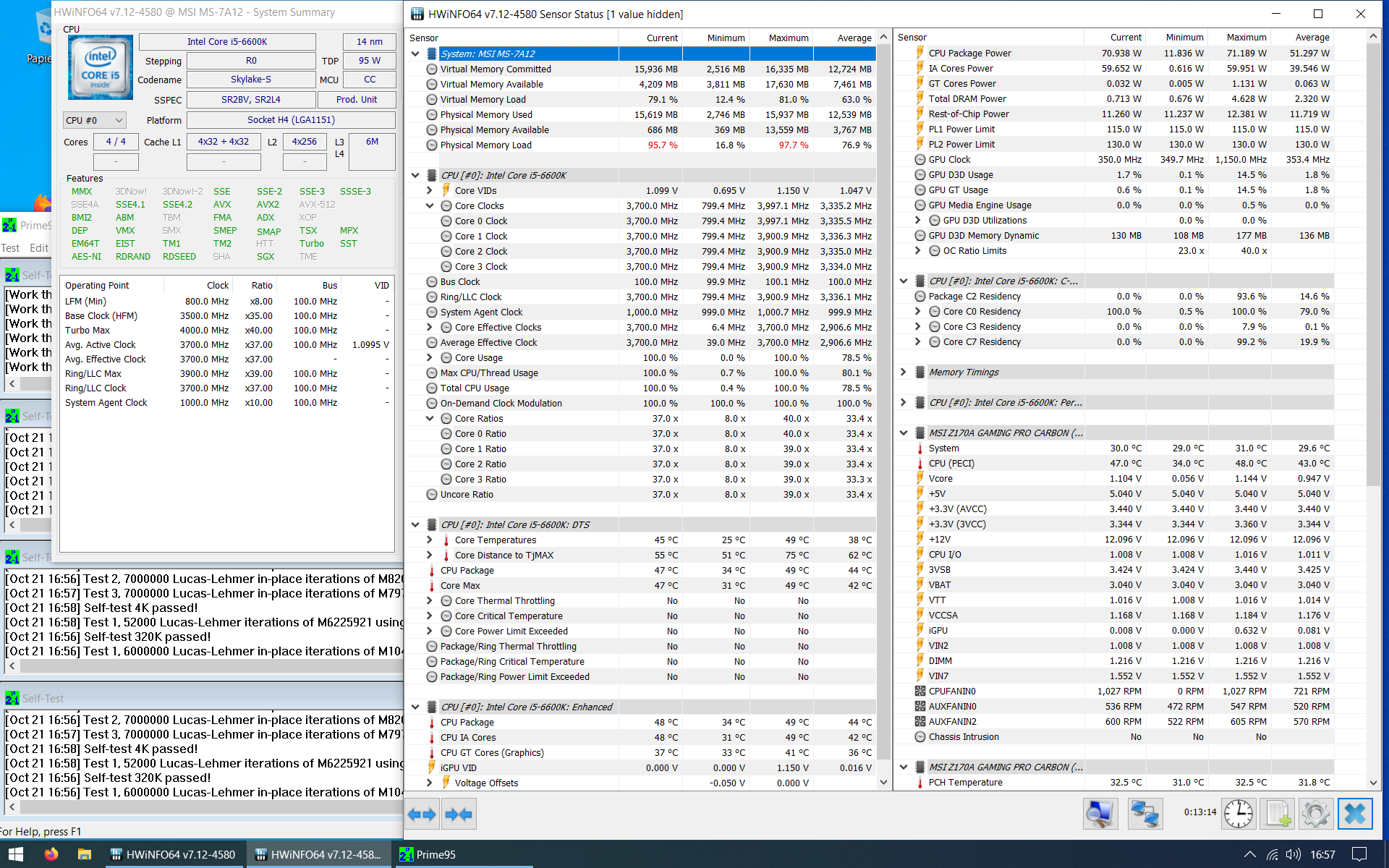 You can see that it boosts to 3.7 GHz under full multi-core load, just like i set in the BIOS. This is of course far lower than your OC, but we wanted a sort of baseline reference, not "who got the better OC". Look towards the top right. When there's nothing to do (idle), this CPU needs 11W (CPU Package power). It is then in C7 state 99% of the time (Core C7 Residency).

Under full multi-core load of Prime95, the CPU needs 71W. This is less than half as much as yours needs, which of course clocks 1.1 GHz higher than mine under full multi-core load.
But do your 4.8 GHz make your CPU more than twice as fast? Obviously not, that's impossibe to achieve in an overclock. What does that mean? My efficiency is much better.

When your efficiency is bad, it means your OC is very aggressive and requires too high voltages. I would optimize it a bit more towards efficiency, meaning, dial down your OC. You will also have it easier to achieve total stability. And now you also know what can be achieved for idle power consumption, close to 10W, you should aim for that. Low idle power draw and high OC don't exclude each other. Those who say that don't know how to OC properly.
Last edited: Oct 21, 2021
Share:
Facebook Twitter Reddit Pinterest Tumblr WhatsApp Email Link
Top