I have a Noctua NHU 14s cpu air cooler installed and didn't realize when I got it that it was as large as it was and it effectively prevents GPU installation in the top PCI slot so I installed my GPU in the second slot. It seems to work fine with no performance hit but the motherboard manual states clearly recommends using slot one and it lists the top slot as 3.0x16 but the other slot as 3.0x8 so I'm worried that I am indeed losing some performance that way and thus probably need a smaller cooler so I can do it the way it is intended. What are your thoughts ? Also greatly concerned about general clearance for installing any GPU in that top slot as it doesn't look like there is much room. Especially whenever I can finally get the new RTX 3080. Does anyone have any pics that show if say a 2080ti fitting on this board ?

Yeah, for a Mini-ATX build, this is a rather large CPU cooler indeed... if not one of the largest, regarding width when mounted vertically. I mean, i have the NH-D15, which is basically just two NH-U14S side-by-side, but the vertical size aka width is identical (150 mm). On a full ATX board, it presents no problem for the first PCIe slot, it's just pairing it with an mATX board where things get pear-shaped.

If you have one or two fan positions on the top of the case, you could attepmt a horizontal mount: 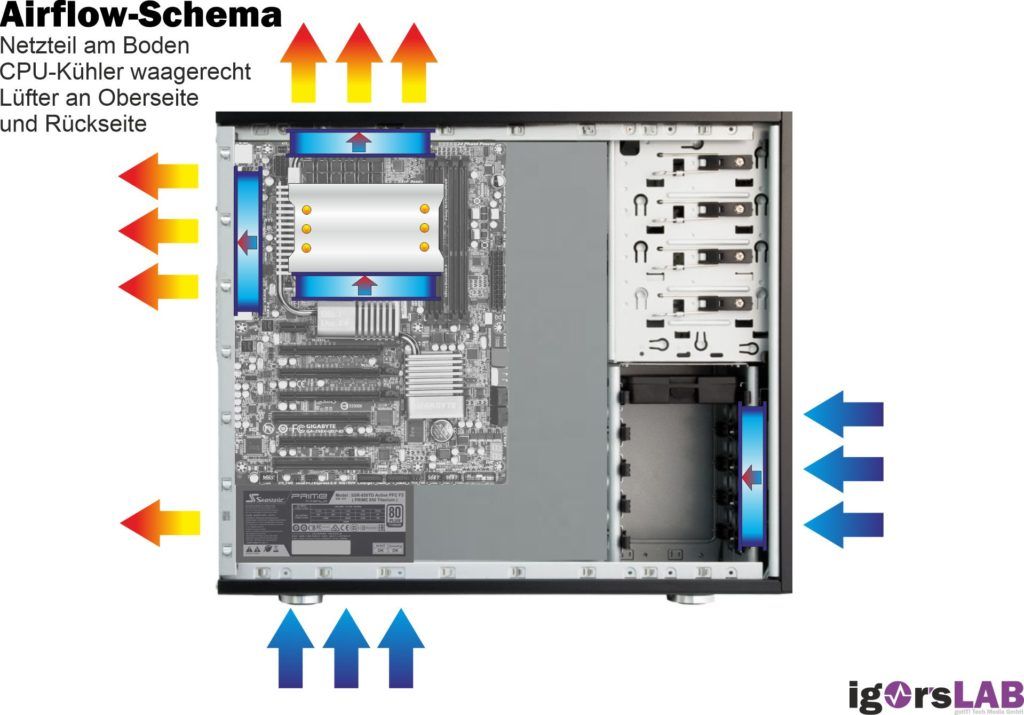 But measure it beforehand, to make sure you can still use the RAM slots. If it's too large, i would resort to a more compact cooler instead.

What i'm more concerned with is cooling, however. How will the NVIDIA 3080, with many triple-slot card designs, get enough airflow in the bottom slot, when it's damn near lying at the bottom of the case already, because the board ends soon below? You see what i mean? That's barely enough free space underneath with the card in the top slot. You need to change the cooler situation.
F

FWIW, PCIe bus utilization by a graphics card isn't anywhere near maxed out.

On an old system with PCIe 2.0 x16 and a GTX 950 for example, I saw 11-14% PCIe bus utilization
as reported by gpu-z with vsync off and the card running GPU maxed out at several hundred frames per second.
(Turning vsync back on (60fps cap) drops it to the 2-3% range.)

Now, when a game (level, map) loads there could be a momentary spike as the GPUs memory is
preloaded with data, sure, but thats all it is, momentary, and there are other variables like SSD speed
and network connection that will also play a role in loading times.

If you absolutely have to have the best then PCIe 4 for both SSD and GPU will probably lead to quicker loads
but I don't know that it would translate into smoother gameplay necessarily.

Modern demanding games will use more, but it appears that PCIe 3.0 8x or 16x is still plenty
of BW for most. Discrete cards have an advantage of having their own very fast RAM and once loaded
aren't as dependent on the PCIe bus as it might seem.