Hi
Thermal paste probably dried out and needs a fresh one.
Check with MSI if you can repaste it without voiding warranty, as rule differs in each region. >>How to contact MSI.<<

TrebleTA said:
Hi all, my MSI RTX 2070 Armor has started to get very hot and I'm unsure why. When I got my new card, under full load it was 68c. now it's bottling at 80c?
Checked the card and it's 95% dust free its just comming up 2 years old i think
Please help is it faulty?
Click to expand...

Are both fans working and spinning at the correct speeds whatever thy happen to be. Crank the Fan speed up to 100% and check the RPM with the um speck sheet I guess. I would guess at about 3,000rpm Plus for that size fan

Most the fans are hitting are 1900rpm. Seems to be idling at 50c too. Also notice the heatsink design is blowing air out the sides, so to the motherboard and case side! So think I will get a verital GPU bracket, That way the intake fans should blow better over the card. As you would think the display card would expel the heat out the case. But no its heating the motherboard and the case side.
Also warrinty wise am in the United kingdom so think I just need contact my card seller?
Last edited: Jan 11, 2021
D

Have a 2070 super ventus, similar to yours, quite a lot of the heat goes straight out the back. If by vertical GPU bracket you mean to mount the card vertically then might have a problem connecting external cables as the case slots would presumably stay horizontal.

Generally it's airflow through the case, or lack of, that causes problems with overheating.

Where is the AIO cooler, is it exhausting air from the case or drawing air in?

How many exhaust fans have you got, is there a clear path from front to back?

I was thinking this Gpu Bracket.
Now the air should blow better over the top of the card were it's expelling the hot air towards the top of the case
I have a NZXT h500 case and a NZXT kraken cooler front mounted so as the intake with fans blowing throu rad in to pc yet thinking of making it the other was so the fans suck throu the rad. I have a top and back exhaust fans
Pic of case 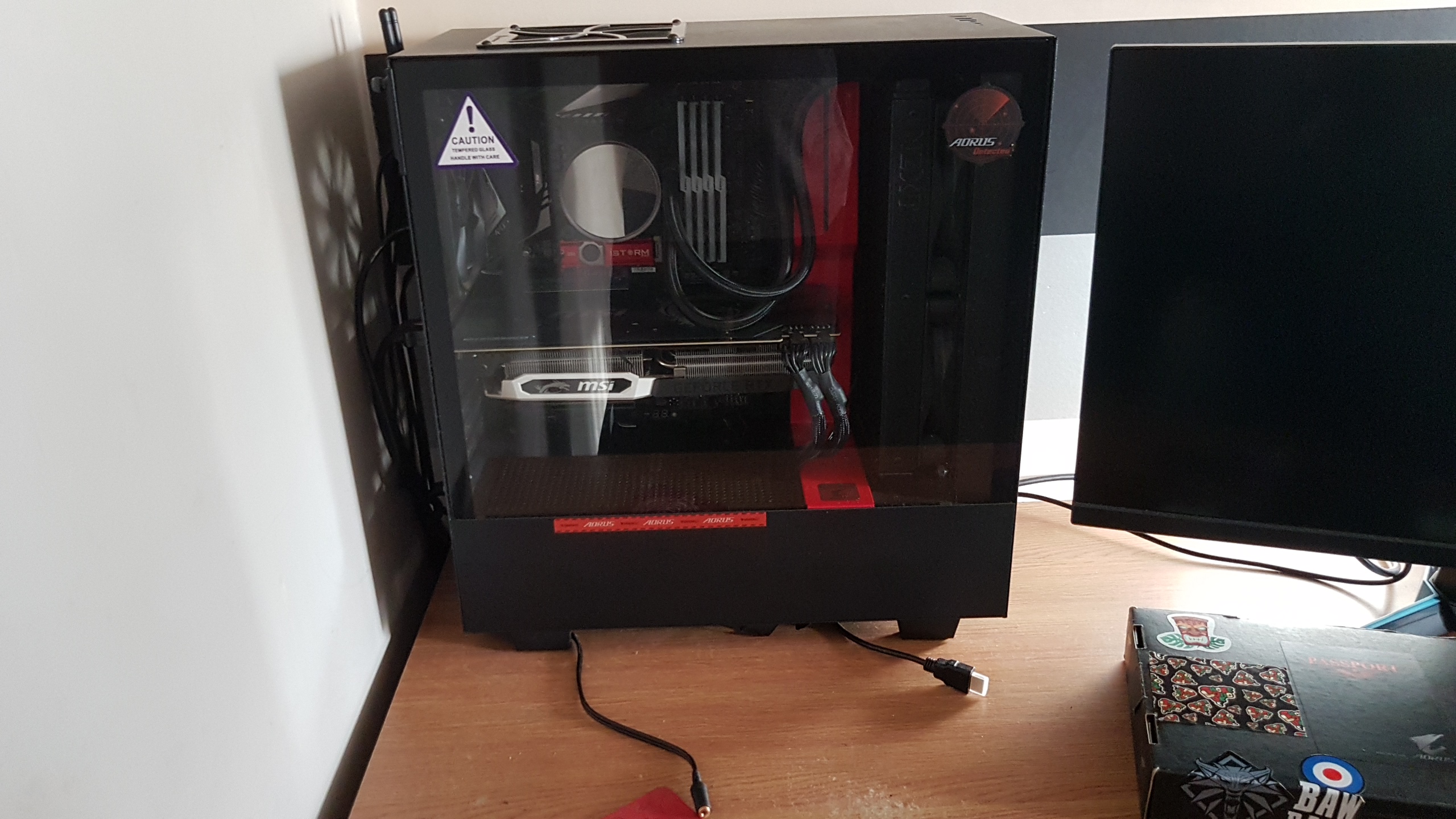 Apparently the case is designed for negative airflow (not front to back) the exhaust fans draw air into the case from anywhere they can including the IO card slots at the back of the case but not an awful lot from the front as it has a solid panel with side air filters.

The AIO at the front is dumping warm air into the case, straight onto the GPU, at the same time disrupting the negative airflow.

Could look at your CPU temps at idle and when running a non graphically intensive app such as Prime95.

yes it is designed that way from what I have read. the front intake in from the side also under the case, why I am thinking of putting a intake next to the PSU. blowing up in to the case.
I have looked at so many fans over some time and I'm still not sure on a good fan, most the fan RPM I'm after is 1500ish. so at about 900-1000RPM will be use speeds.
D

I think you need to look at CFM (how much air the fans can move), it's a combination of speed and fan blade design.

Also, if fitting fans in confined space you would need to look for fans with high static pressure.

Do you know the make and model of the fans you currently have for exhaust?

default fans that come with the NZXT h500 Case, same for the ones on the rad cooler. I will be looking at 3x 120mm fans for the top and back exhaust and one for the bottom intake, that I will fit blowing up in to the case not sure and not to bothered if RGB or not, just good air movers

TrebleTA said:
default fans that come with the NZXT h500 Case, same for the ones on the rad cooler. I will be looking at 3x 120mm fans for the top and back exhaust and one for the bottom intake, that I will fit blowing up in to the case not sure and not to bothered if RGB or not, just good air movers
Click to expand...

IF you not interested about RGB grab the Black Noctua 120mm or 140mm FANS if they will fit wiil match what you have only need two one at the back and one at the top set both to blow air out of the case
My case is not to different from yours just a bit more ventilation at the top two by 140mm fans at top and one 120mm at the rear and two more 140mm fans front of case, front case fans pull and the other 3 suck I have no heat problems and MY CPU generates a far bit of heat. and I have a almost identical set up minus the AIO All case fans are set at 800 RPM

This is the case I am using and is pretty much identical to what I have.

I would say you may need to redo the Thermal paste on the GPU lots of how to videos on Youtube and I believe your warranty is not a problem due to age. 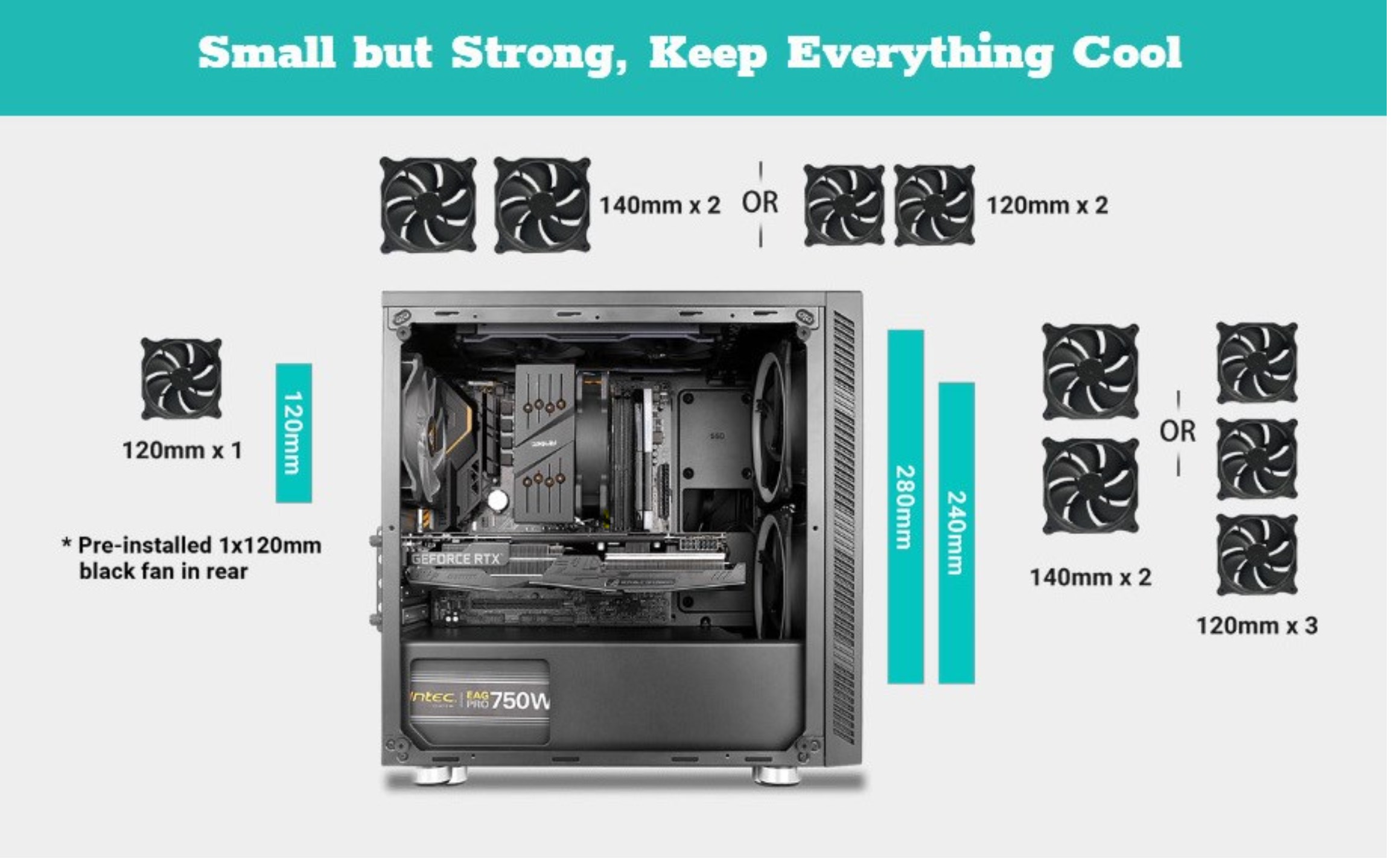 Thanks, I will still put a fan at the bottom blowing throu the holes in to the case. Just to push clean air on the GPU and push it to the top fans, My fans at moment are going from 1000-1400 (top speed)at moment. Depending on PCH temp as that get the hottest in my system but the GPU I think is also increasing PCH temp.
Still unsure on the fans tho, some say Scythe are good too, I want high air flow for the case. Will worrie about the rad ones another time.
Thanks for the help. Most appreciated.

GPU shouldn't be increasing PCH temp.
Generally, that is a huge indicator of either lack of proper airflow in a case, poor airflow through the case (like having the front be an intake, back be an exhaust, so air gets trapped underneath the GPU), or that you need some directed air within the case (by another fan inside the case directing air to areas you need it).

My general experience, is when there are issues with heat, it's either a problem with the interface (ie the CPU/GPU/PCH and the heatsink, so bad compound or not tight enough, etc....) or poor airflow management within the case itself (ie bad airflow over components, or poor airflow in the case causing some components to not have enough airflow over their associated heatsinks).

If your top fans are exhaust, and front fans are intakes, it's very possible to have air flowing most in and out right away, without much air flowing to the back of the case to help the GPU, PCH, and VRM heatsinks, which would help explain your increased temperatures all around.

Personally, I prefer positive pressure inside my case. I want to push hot air out as much as possible. I have 8 intake fans, and 5 exhaust fans in my case (mine is actually a large cube, with a 2x3 arrangement of fans in the front). This means I'm pushing hot air out everywhere else the case has openings available as well, which means air is going to flow all over the case no matter what.

It's a different line of thinking.....and I can see why some would prefer negative pressure.....but I've found all too often it just doesn't work well unless it's specifically designed to do exactly that. Most cases I've found, just aren't.

Well when gaming under load my PCH hits 47c ish. Idle 38c, So i control fans based on that temp setting. My cpu gets to about 60c at points was just the gpu. Problem was heat hitting the glass and getting stuck. I have done as I have said above and now my gpu is hitting 71c and idle cooling to 38-40c.. Still hotter than I like under load but blame the warm air intake from the rad.
But do agree when I got this case, it was a very bad idea. I like good air flow, this case would be ok for office use. It was fine till summer gaiming, that's when i first noticed it starting to be a sweat box. Even the nzxt cooler, i would not recommend. Yet it is better now due to a 3ed party openware app. Don't need there crappy software.
P.s at 40c PCH my fans are at about 70% 50c 90%

Ok after 4hrs playing cyberpunk GPU peak temp in Hwinfo was 72c fans max 1600rpm so lots better, yet still after the 4 hrs I noticed it say yes under gpu thermal limit reached in hwinfo??

TrebleTA said:
Ok after 4hrs playing cyberpunk GPU peak temp in Hwinfo was 72c fans max 1600rpm so lots better, yet still after the 4 hrs I noticed it say yes under gpu thermal limit reached in hwinfo??
Click to expand...

Looking at the BIOS for it the shut down is 115c

So why's is mine saying it has hit the thermal limit?

TrebleTA said:
So why's is mine saying it has hit the thermal limit?
Click to expand...

Good question could be a montering error or is the hot spot temp hittin the 89c max And it may just be that you heed to do a service on the GPU replacing th Thermal compound and all the thermal Pads with new one and ones of better quality I use the Arctic Silver 5 Thermal Compound s it has worked well for me and as for the Thermal pads I have used K5 Pro Viscous Thermal Paste for Thermal pad Replacement I find it easier than trying to get the correct size thermal pads. K5 Pro Viscous Thermal Paste