Hi folks,
I thought I will share with you my experience with MSI's RTX3080 Suprim graphics card, both aircooled and watercooled. There are some interesting notes related to the components as well as watercooling itself.
I'll start off with the fact, that the card is huge in every direction. It takes 2.5 slots, and barely fits in my Phanteks Enthoo Primo chassis. Literally few mm and wouldn't be able to fit it. Anyway, why tell if I can show the situation..
Card itself is pretty nice, metal mixed with some plastics here and there. 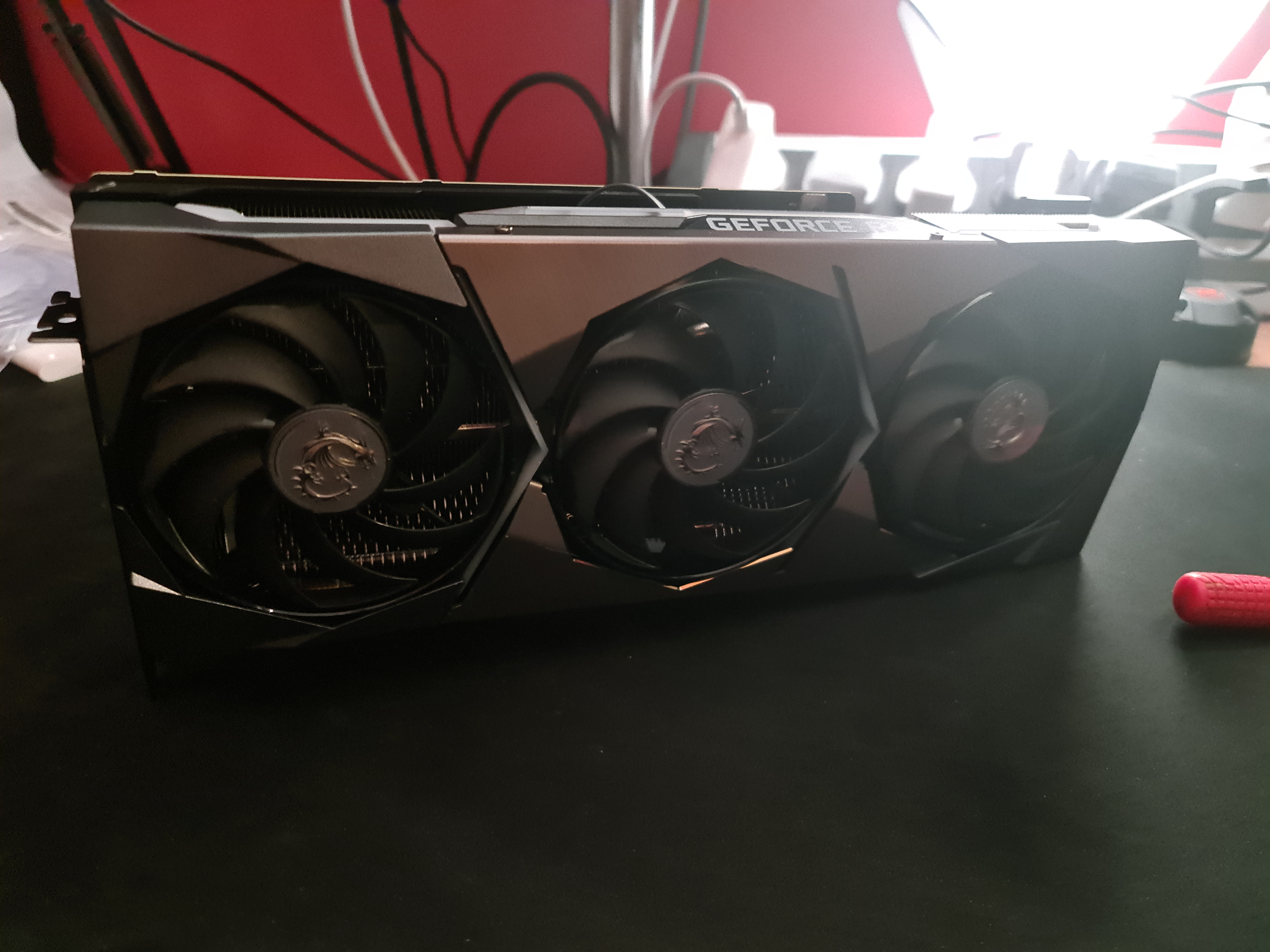 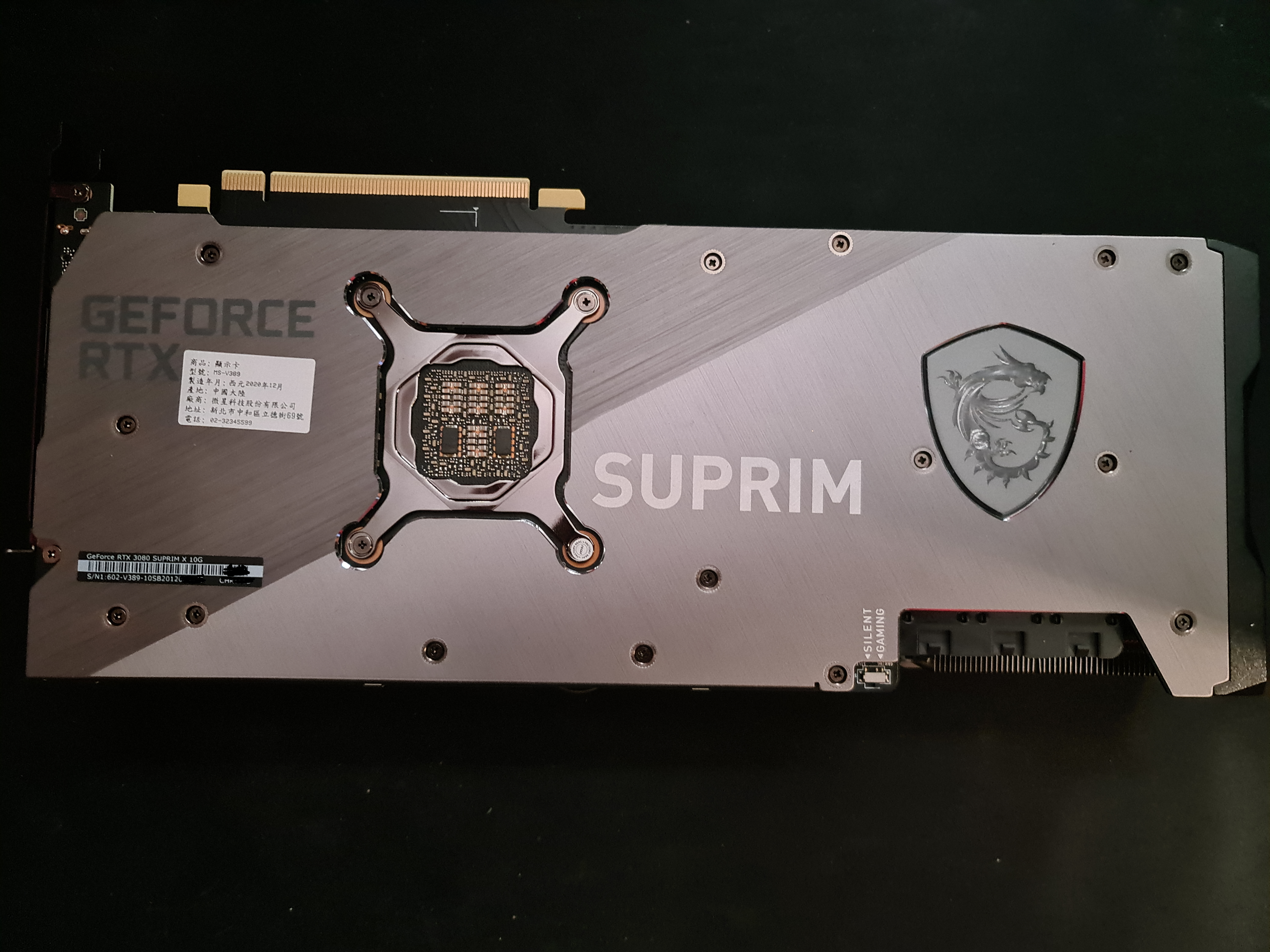 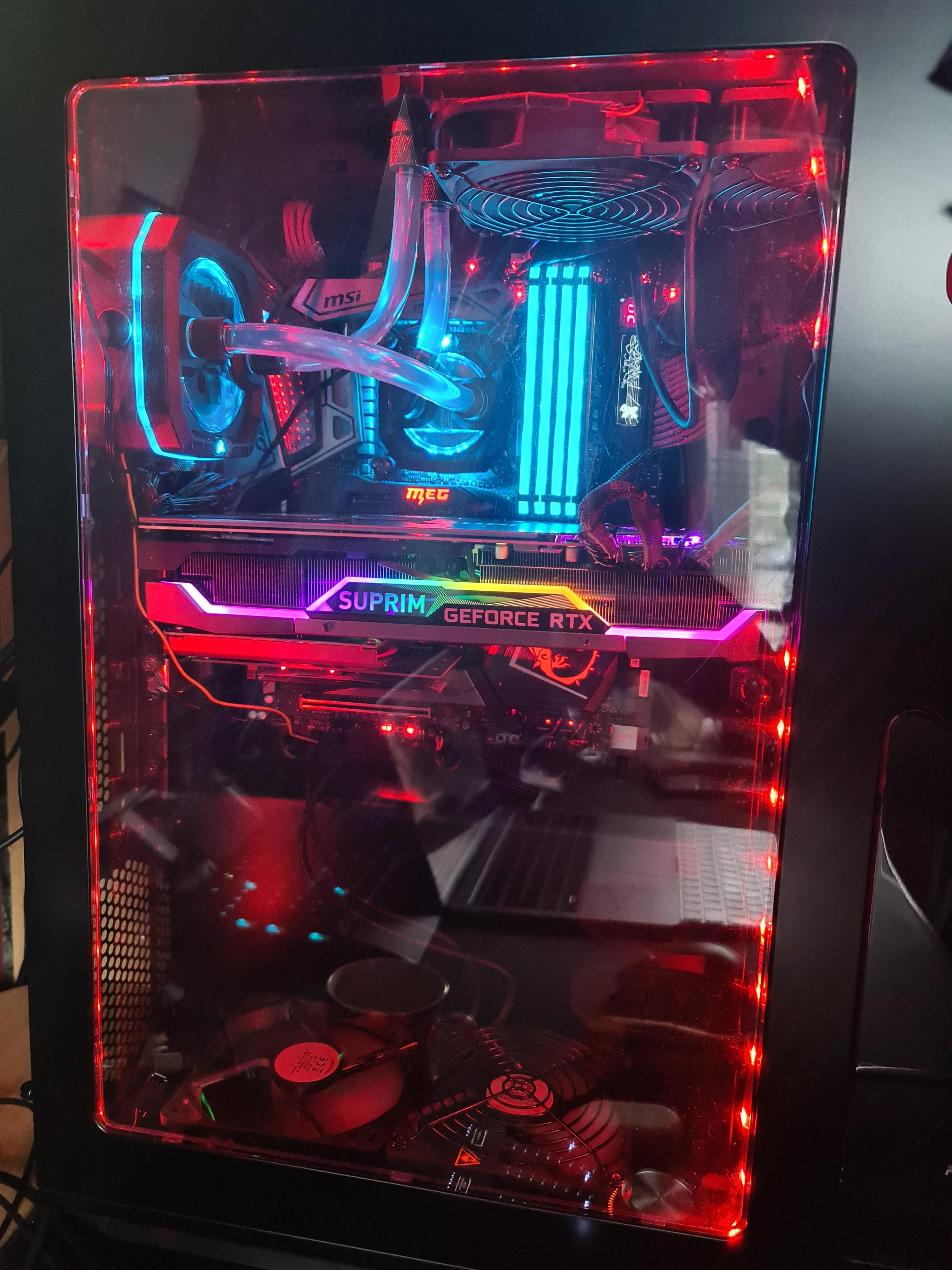 And how much space there was left... 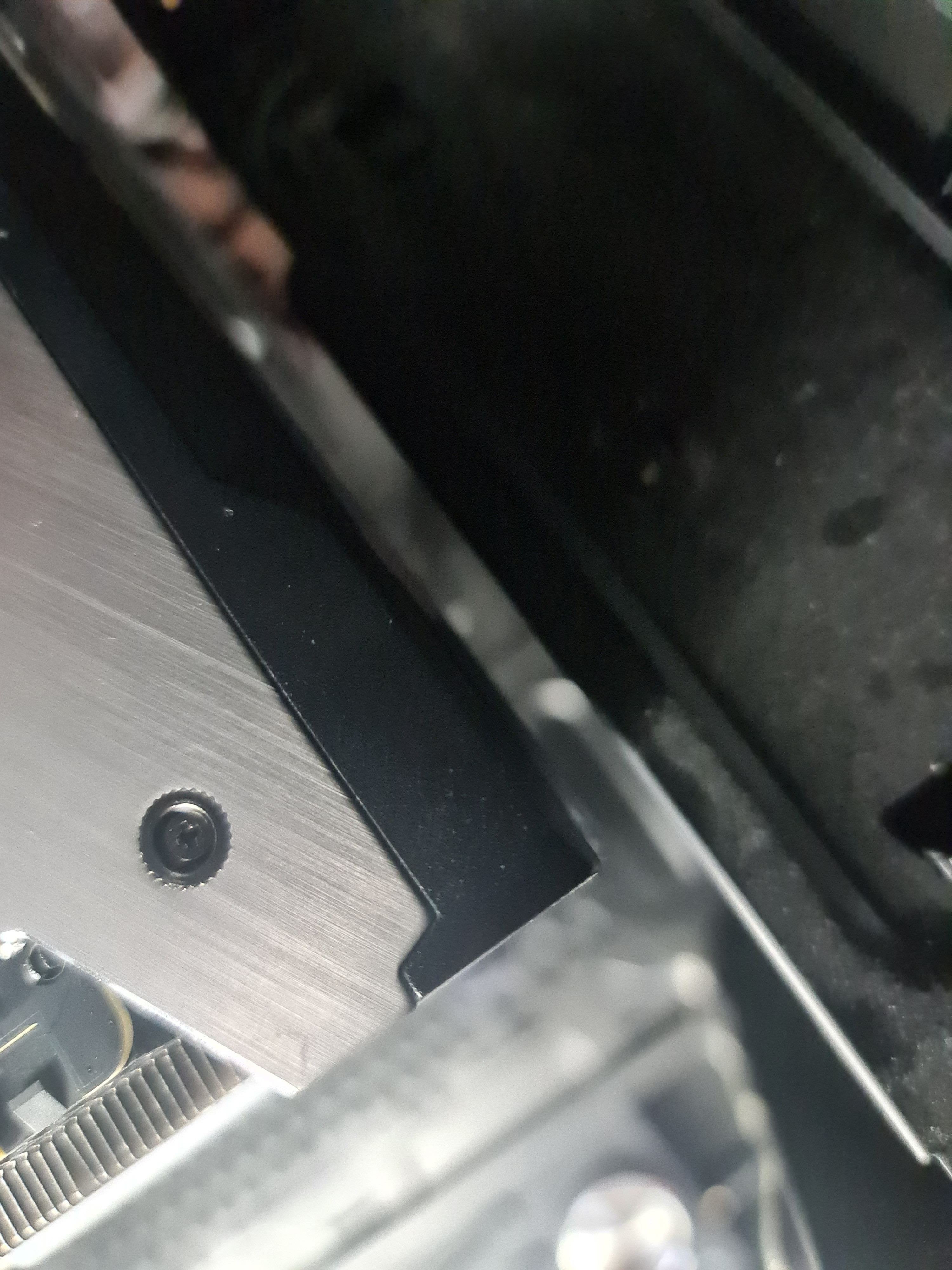 There is no need to present how it performs, we all know it's a beast of a chip.
But how does it perform in terms of cooling? Well.. pretty well if you ask me.
On the top of the chassis I have 360mm radiator in push-pull config, pulling air in towards the card. Front has 2x 120mm intake fans, and bottom is 2x120mm exhaust fans.
Odd configuration? Yeah.. When I had bottom intake and top exhaust, my CPU was literally boiling. The card was literally throwing fireballs during heavy load. After switching things around though, my CPU was nice and cool again, and GPU was performing the same.
Now back to cooling performance..
FurMark for 20 mins: (make sure to enlarge it) 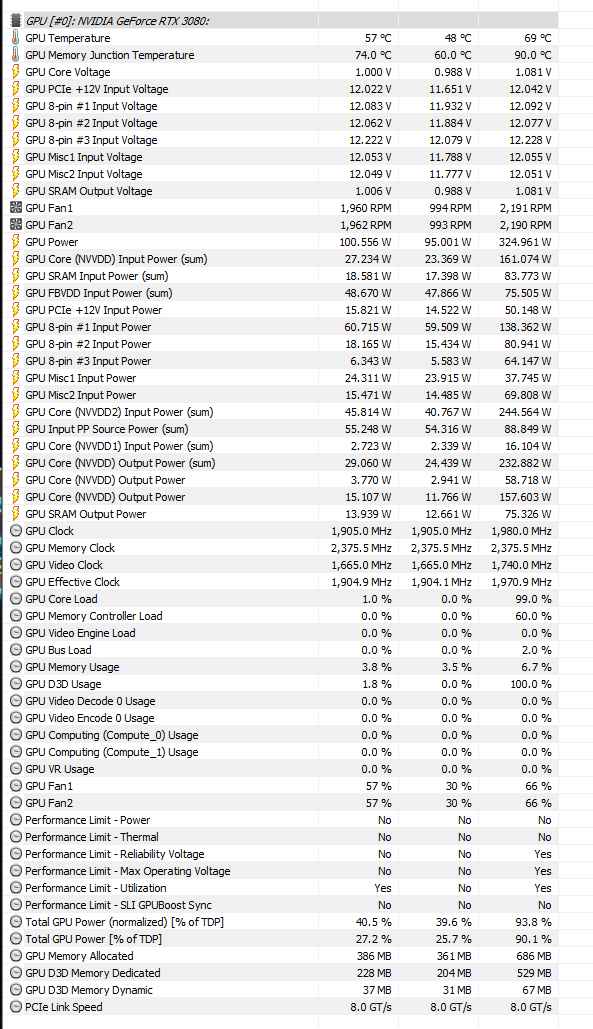 69C degrees on the core isn't that bad, is it? Some headroom still in place. But can't say that about VRAM temps, which reached 90C; threshold is 108C at which point it'll start dropping clocks a little bit to maintain ~108C on VRAM.

Considering the fact I already had some spare pump+reservoir (2in1) and 240mm radiator, I ended up buying EKWB acrylic waterblock and a nickel backplate. Managed to grab literally last block from Overclockers UK. It is pretty expensive, as block+backplate combo ended up almost 210GBP. But man, that was well worth it.. Do I need to say that the waterblock is compatible with 3080 AND 3090 Gaming X Trio / Suprim?

If I end up upgrading to 3090 at some point, I can reuse the block, so very happy about it.

Time to disassemble the card. I'll just say that I have lost the count after 10 screws; not sure if that's because I was confused by the amount of screws, or just that my abilities end on counting to 10
The backplate with 5mm (measured by eye) thermopads. 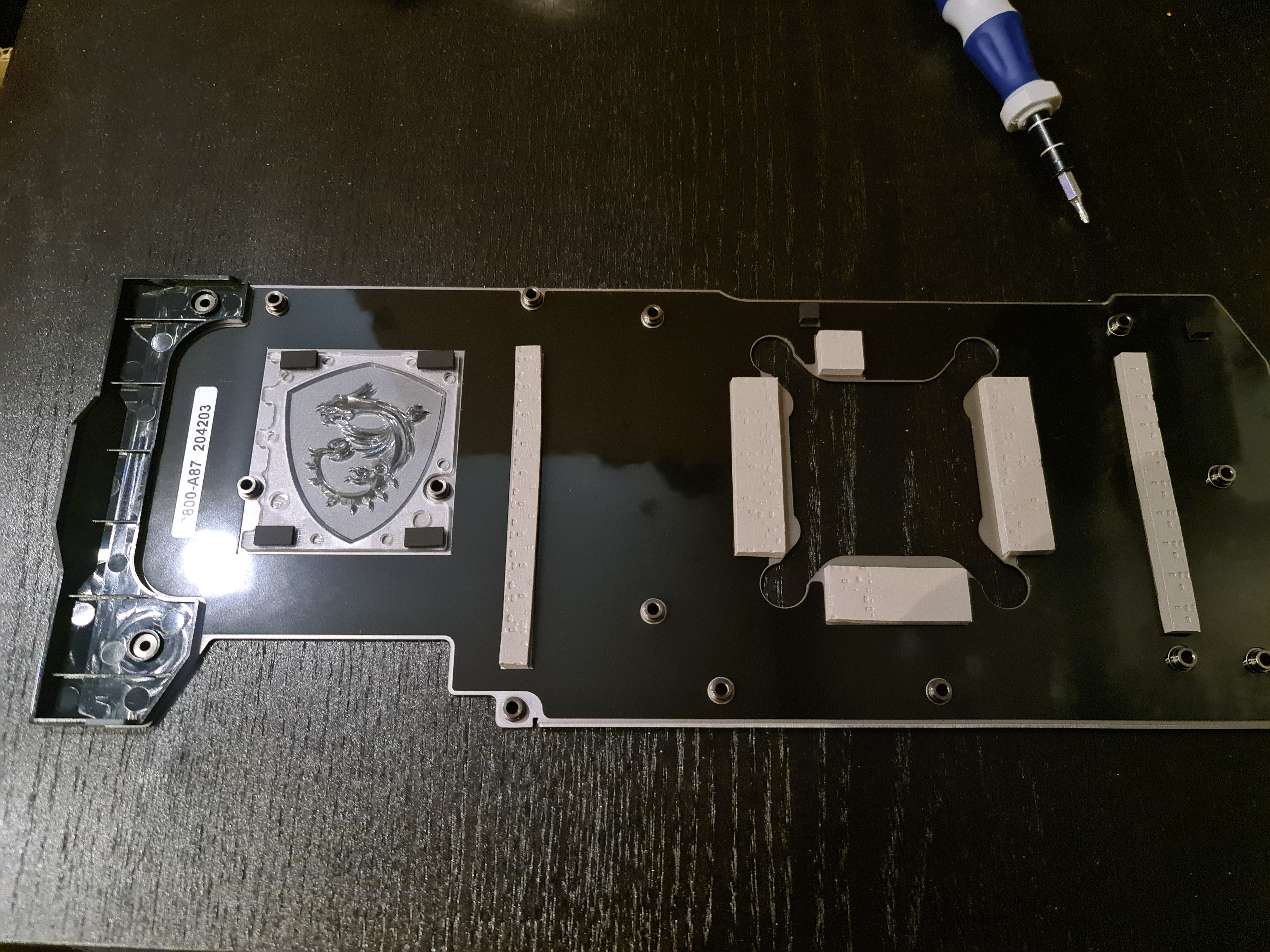 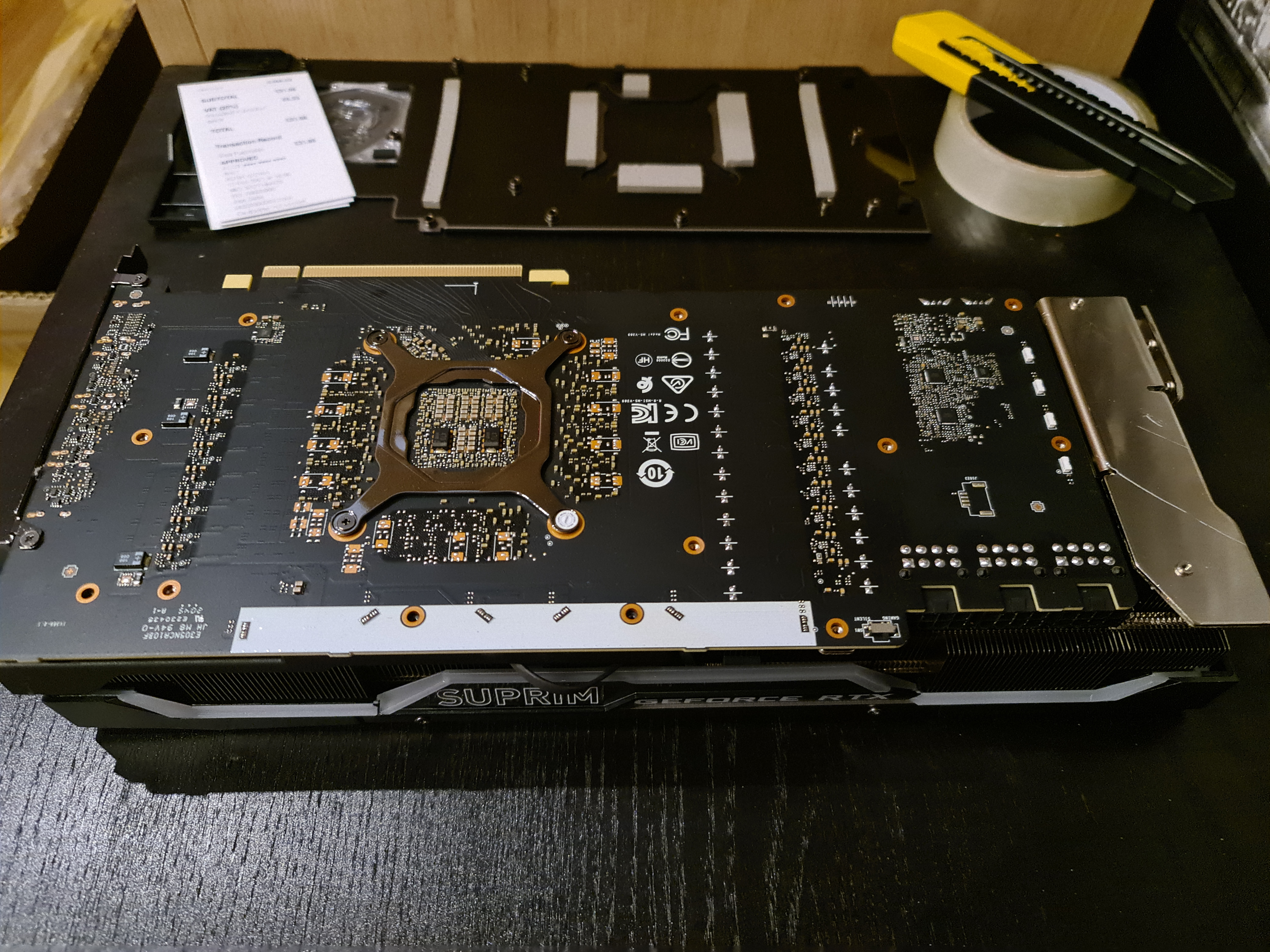 And that's a warranty gone to hell: 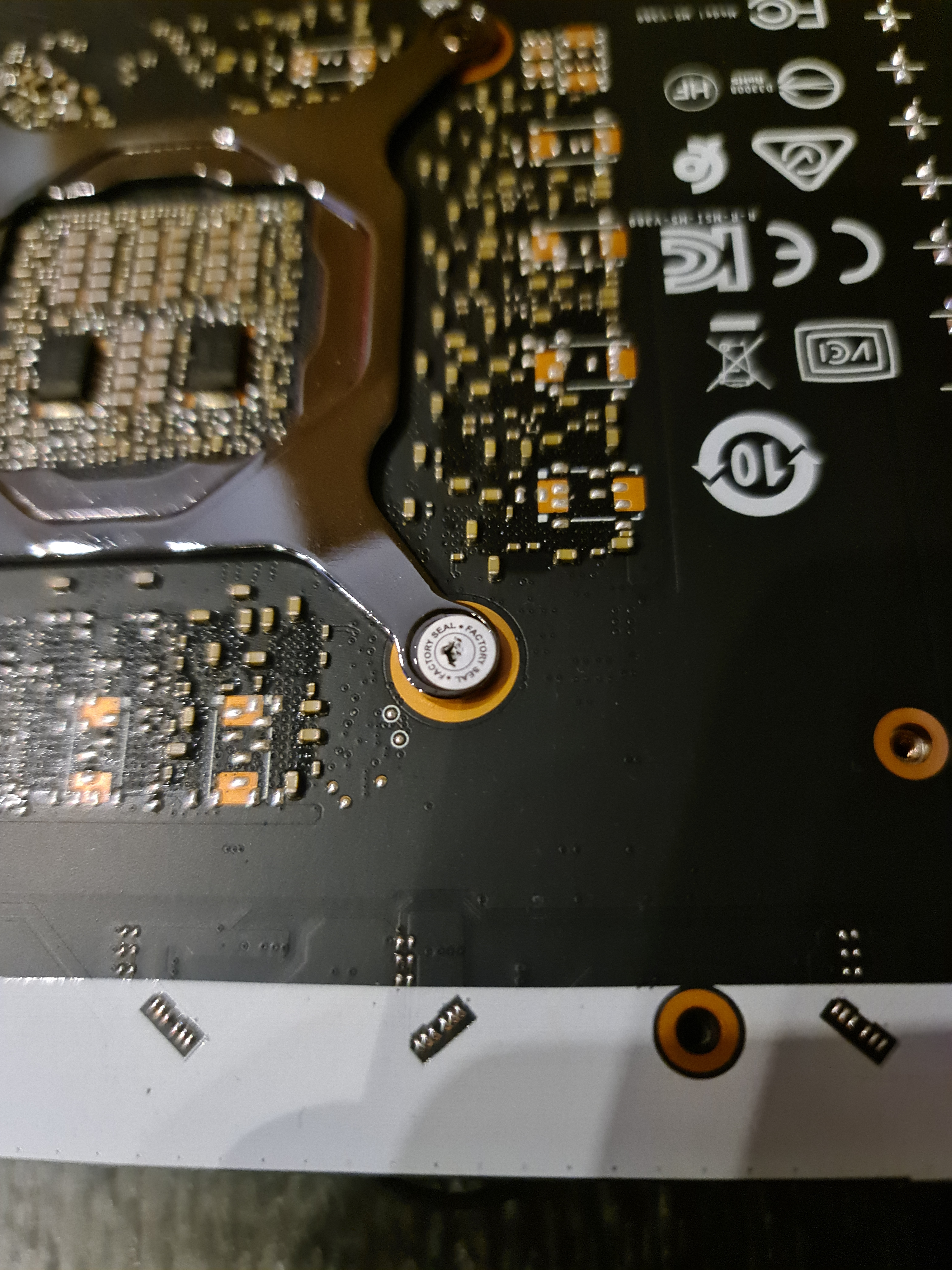 Taking the cooler was a real challenge. The amount of thermal pads it has literally felt like it was stuck together with a glue! 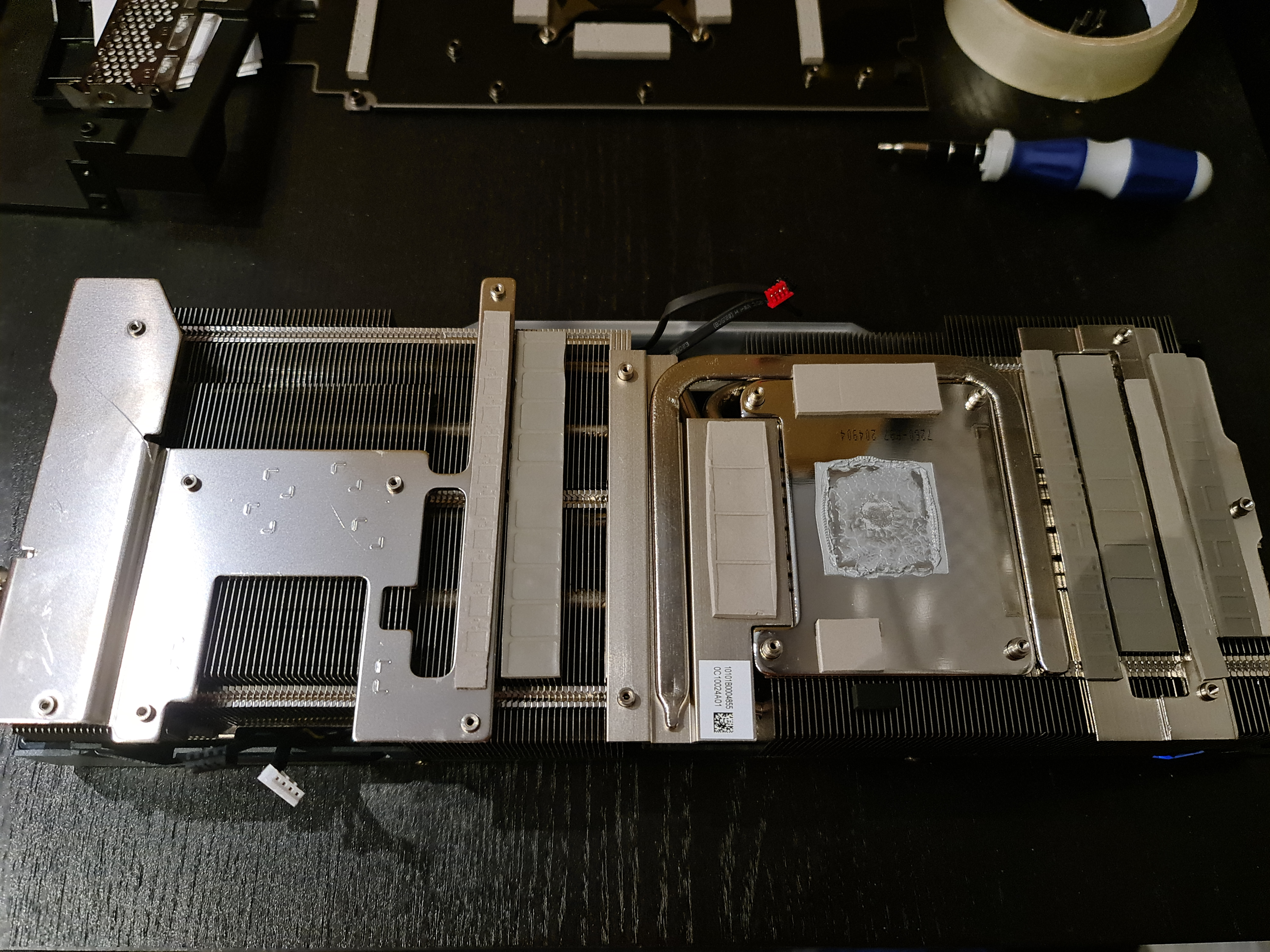 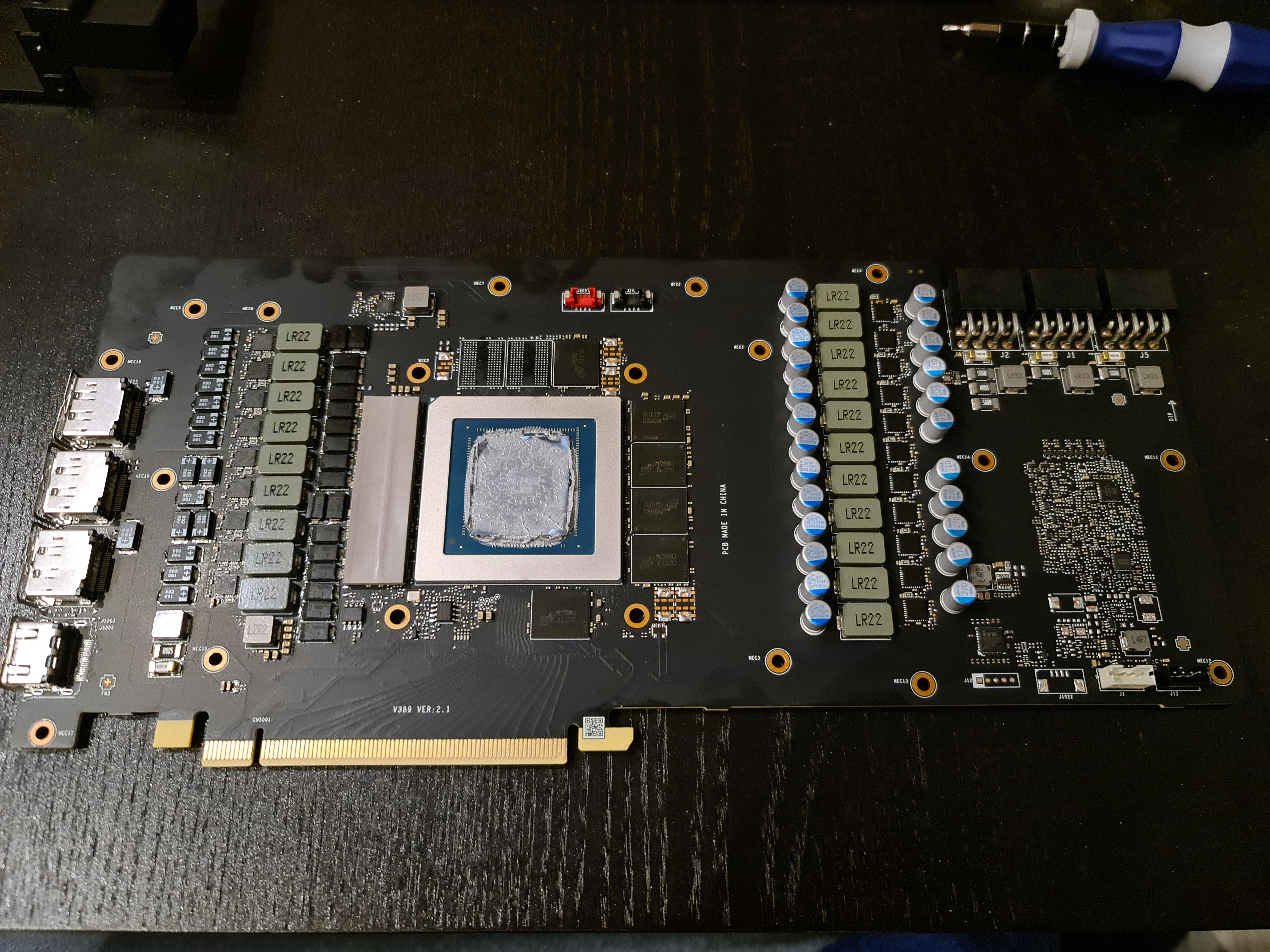 Now, I really couldn't be bothered to take more photos of assembled card, and while it ended up very well, the EKWB backplate is an incredible fingerprint magnet..

The final result (yet to clean few things off and close the chassis).

Now I know all you want to know about is the temperatures, RIGHT?
Here you go, after 1 hour of FurMark, and card running on separate loop from CPU on 240mm radiator in push-pull config...
Now how is that, 47C on the core, and JUST 62C on VRAM? Amazing, isn't it? 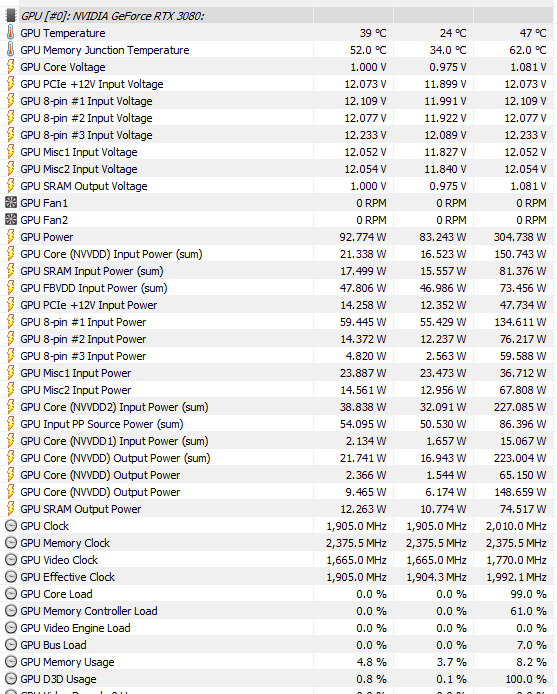 Few points to conclude this card on both air and water cooled:
1. Thick boy that runs pretty damn cool. And silent. It maintained around 70C with fans at around 60%, so still a massive headroom for overclocking which I passed on for now, as Afterburner seems to be broken for me (yay... )
2. It blows fires of hell into the chassis, hence extremely good airflow is required. Won't mention how big the chassis must be.
3. When it's watercooled, I can actually fit 2 fingers in the spot that was so tight.
4. Also with the waterblock, the card physically is just 1 PCIe slot "large". Only extra PCIe slot is taken by the I/O bracket itself, otherwise it'd easily fit in single slot.
5. MSI did not cheap out on the thermal pads or paste. Although I'd really want to see a proper metal backplate to help with taking away heat from the VRAM. 90C is acceptable, but I could literally cook eggs on the backplate.
6. Weight.. included little post to keep the card from sagging must be used. Without it, the card was in a very awkward position, where one corner would be like 1cm higher than the other.
7. Fitting the waterblock and the backplate was pain in the... *beep*... The amount of screws to take out and put new ones in, as well as cut all thermal pads down to the right size was quite a thing. Day before waterblock arrived I've spent about 1h taking the card apart, to make sure I don't damage anything. And today when the block arrived, it took me almost 2h to fit it altogether. Yes, cutting thermal pads to the right size is time consuming.
8. Not sure what else to say. I thought I'll just post "quick" summary and observations, especially about watercooling the card as I could not find any information about it myself. Any questions, just ask.

Nice review.
But your cable management stinks. Fix it.

In all seriousness, good job. Good scientific methodology to provide good and accurate data. Gamers Nexus could take notes on how to actually properly review something.......
L

yeah i have installed ek block and backplate and liquid metal for gpu but memory still reaches 60c for games and 75c for mining which i dont do as often may be a day or 2 in a month, looks like the memory on the back is getting too hot even though a fan is blowing on the back, might have to make a cut in the backplate to install those copper heatsinks on em for better heat dissipation.

Well I can't complain about vRAM temps anymore. It is much better than stock ~98C with 3 fans blowing straight onto it.. not a concern anymore, for me at least.

lingaraju.g said:
yeah i have installed ek block and backplate and liquid metal for gpu but memory still reaches 60c for games and 75c for mining which i dont do as often may be a day or 2 in a month, looks like the memory on the back is getting too hot even though a fan is blowing on the back, might have to make a cut in the backplate to install those copper heatsinks on em for better heat dissipation.
Click to expand...

75c is quite a decent temp and nothing to be concerned over I think the shut down temp on memory is 115c so you are quite bit below that.

In all seriousness, good job. Good scientific methodology to provide good and accurate data. Gamers Nexus could take notes on how to actually properly review something.......
Click to expand...

Well it is a tad better than mine but did you see them grubby fingerprints on the backplate time to DL that pick and scan them and commit a major crime with them grubby looking prints on that back plate.

It looks like a very nice setup. Full specs would be interesting

I'll surely add full specs. But have just ordered new chassis and fans, so an update to follow anyway

Hi Nichrome, are you able to share what the measurements of the thermal pads are? I would really like to apply new ones but can't find the necessary information.

5mm backplate. 2 and 3mm cooler. Rough measures as I don't have anything to do it accurately.
Will post photos tonight.. came out fairly well lol
S

Nichrome said:
5mm backplate. 2 and 3mm cooler. Rough measures as I don't have anything to do it accurately.
Will post photos tonight.. came out fairly well lol
Click to expand...

To clarify, I'm referring to factory thermal pad sizes, not those that go with the waterblock--I was not clear about that. Can you confirm that's what you were referring to? Also, do you plan on posting the photos today? I would love to be able to take care of this before the weekend is over!

Yes the sizes I provided are for factory SUPRIM cooler. 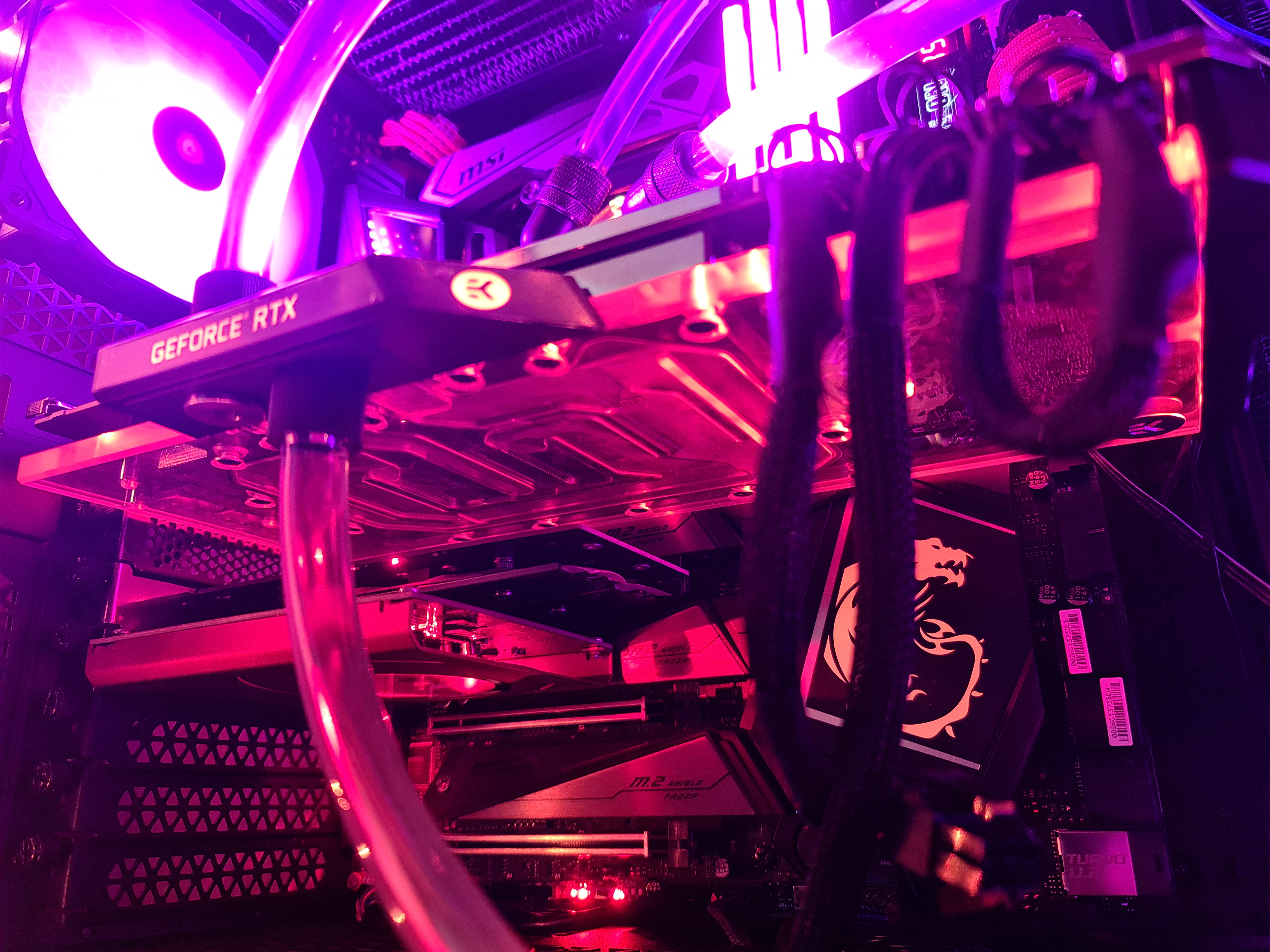 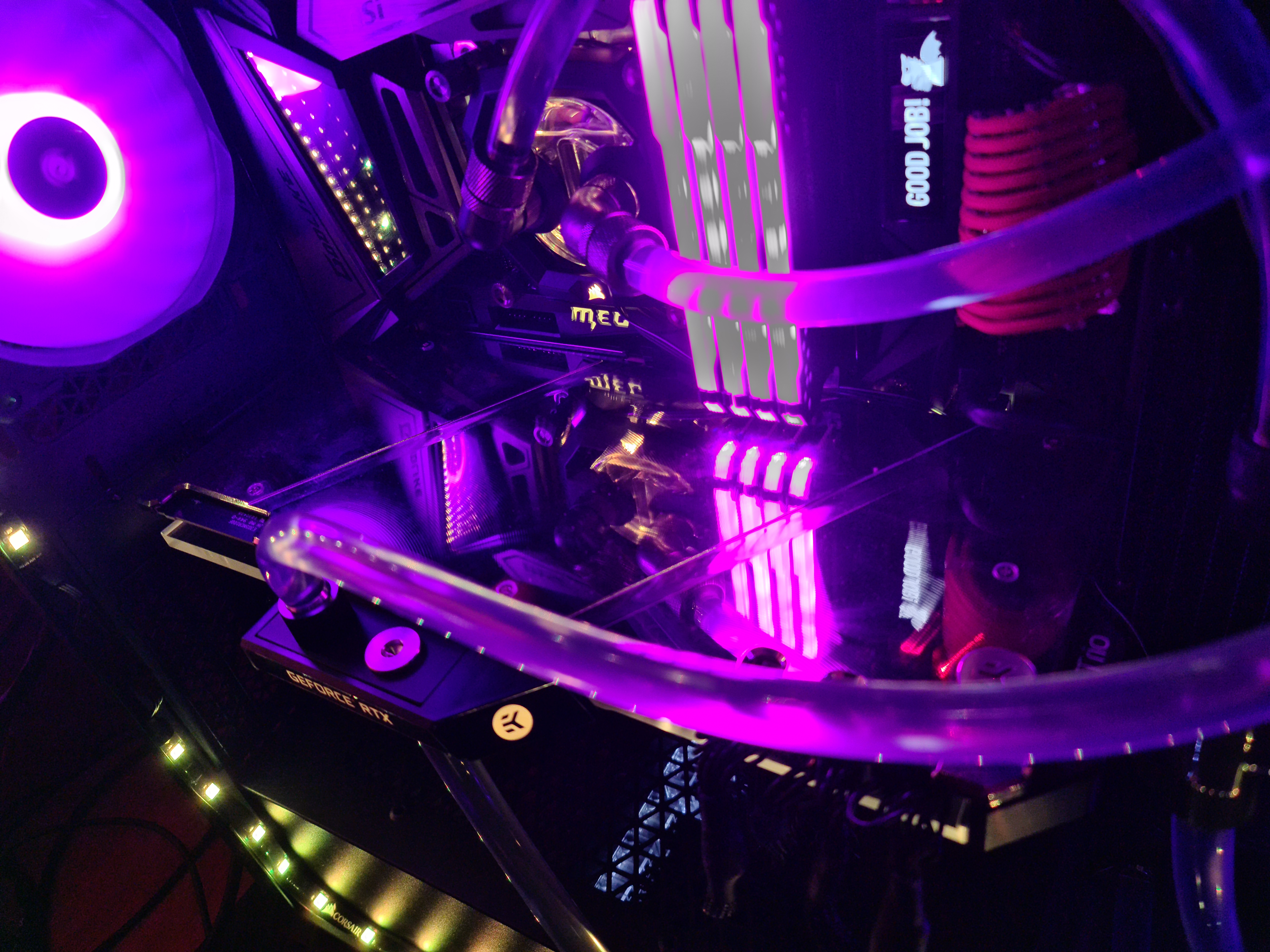 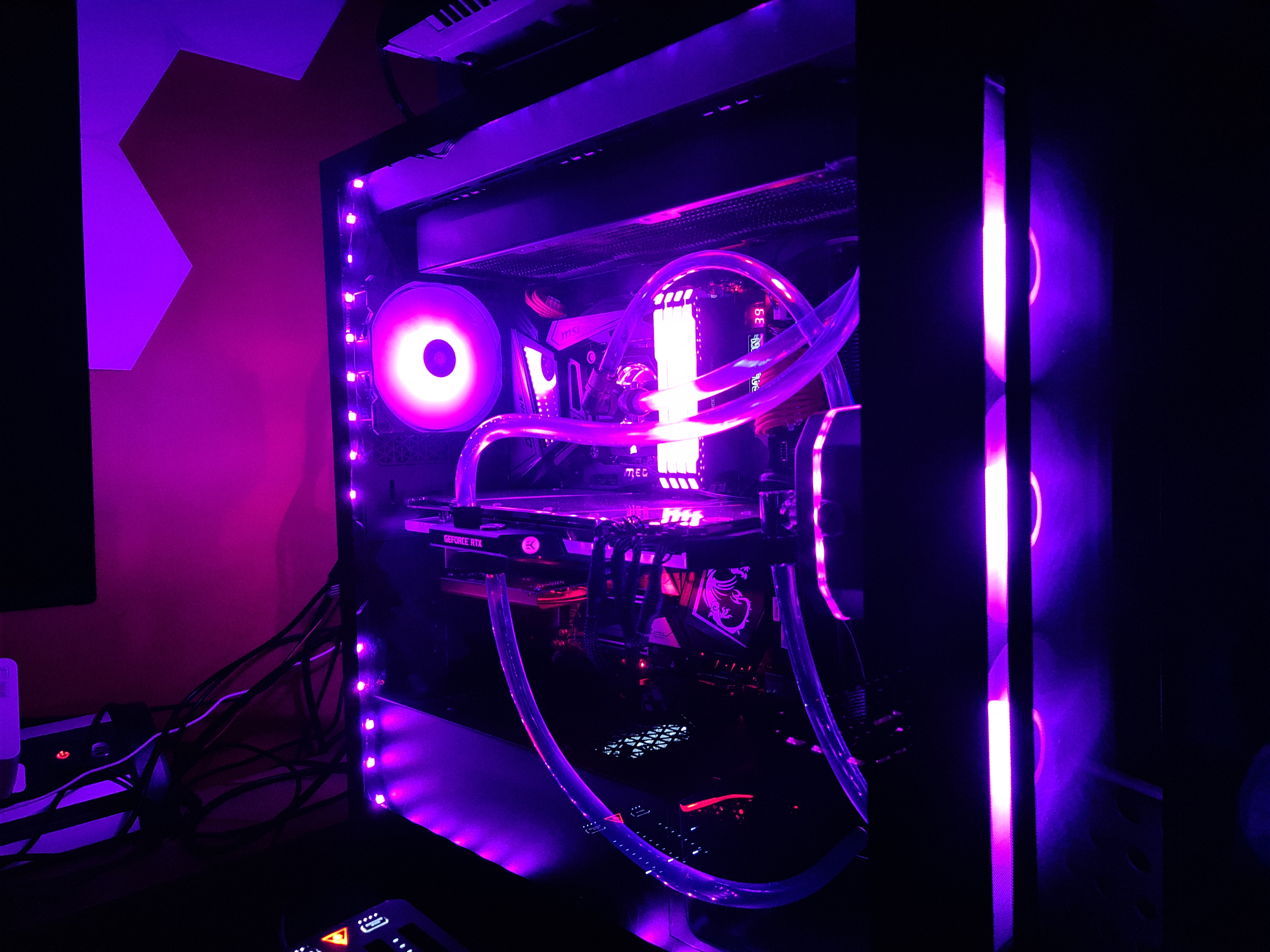 I just applied a Fujipoly pads to the VRAM, and thermalright pads in a few other places on the bottom (heatsink side) of the PCB. Astonishing difference of about 10-14 degrees on the memory. SHould be even better when I rethermal the top (backplate side). YES!

Alan J T said:
OK how did you get massive image files onto the forums they is way over 1MB
Click to expand...