Strange Issue with new 6800xt; No Video on Restart

I recently stumbled across a Gaming X Trio 6800xt at a local computer shop at MSRP; Impulse buy of the century lol.

After swapping out my 5700xt, I noticed the issue immediately after my first driver update. After a restart, there would be no video signal/output at all and the onboard diag LEDs on my mobo indicate that it has an issue initializing VGA (White indicator). I have to shut the computer down completely in order to resolve the issue, which thankfully, works every time.

I've found a bit of a workaround to update drivers and such by using my motherboard's Q-code temperature readout; I have to guess when the system drops to idle at the desktop and, using the my chassis power button, I would have to prompt Windows to shutdown completely. After shutting down to an off state, the system and the GPU would boot as normal. The indicator would go back to its typical green and I would get flawless video signal.

I am using a PCIE gen3 riser cable which im hoping to swap out next to see if that's causing the issue; This beastly card is a long-boi and hits my reservoir when installed in the actual pcie slot, so I'm not able to test directly without re-working my liquid cooling loop unfortunately.

Although both the board & the card are pcie gen4, I attempted to downclock the port to Gen3 just incase the riser cable was bottlenecking on reboot however that seemed to have no effect on the issue. I also popped my 5700xt back into the system & I was unable to recreate the issue, although given how temperamental these riser cables can be, I'm not hugely surprised....

As for my next few troubleshooting steps, im going to attempt the following (in no particular order):

1. Mobo bios update
2. Swap out riser cable
3. Try card in alternate system. (The only other board I've got to test with supports gen2, Asus crosshair iv formula, but should work for testing purposes)

Beyond these steps though, I'm at somewhat of a loss.... has anyone encountered this issue before? Its somewhat discouraging to spend +$1k (local currency) to have an issue like this out of the box. That being said, given how consistently the issue can be rectified with a shutdown/reboot, I'm of the impression that its likely just a setting I've got mis-configured somewhere. If there are any additional steps I could take, your feedback would be greatly appreciated!

I've included my system info, driver deets as well as the snippet from the user manual regarding the onboard diagnostic LEDs; I'm really leaning on the collective knowledge of the community for this one because, like I said, I'm at somewhat of a loss. 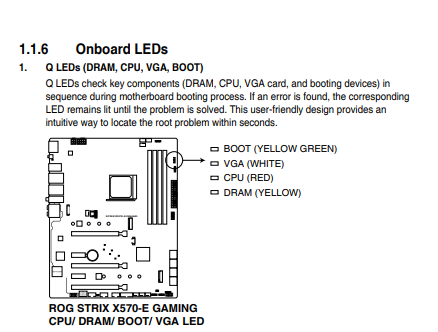 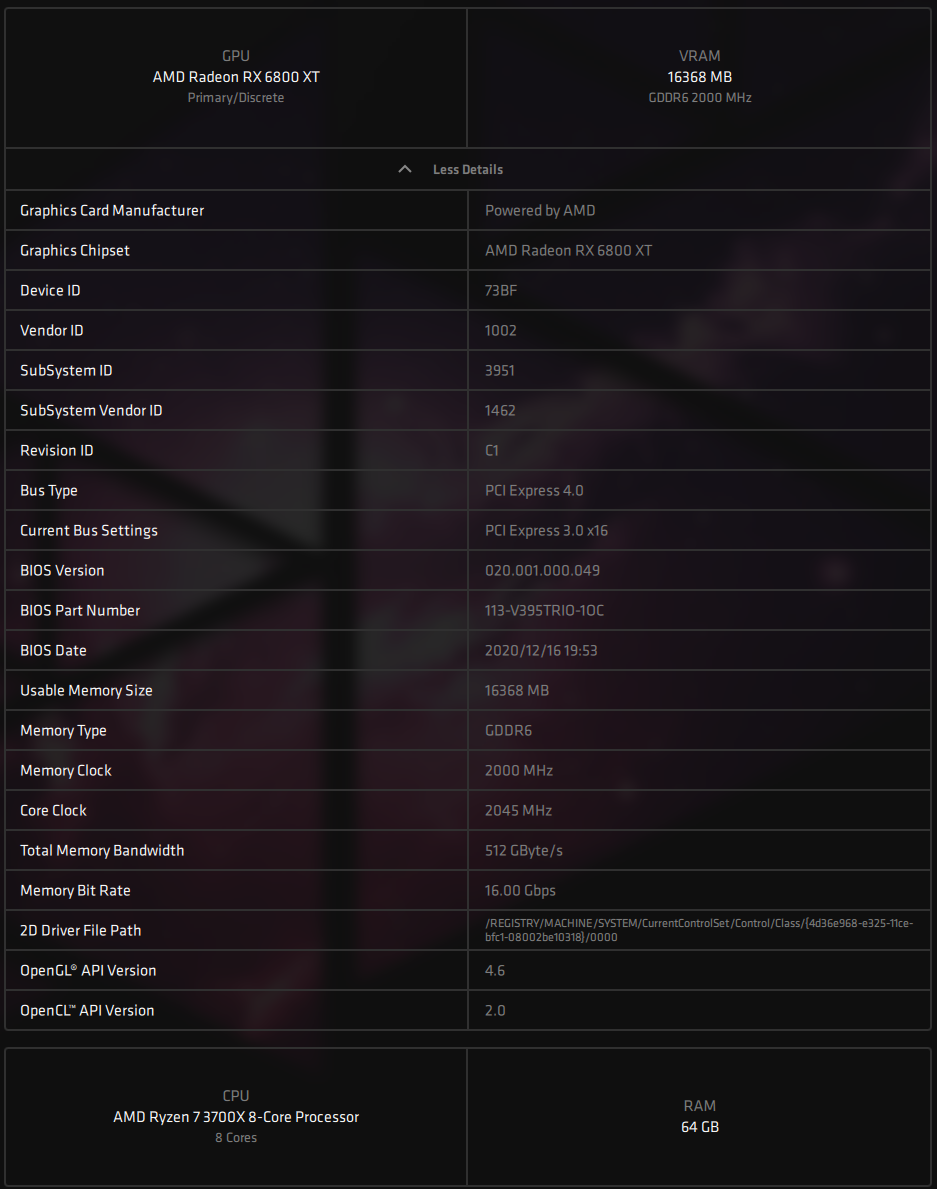 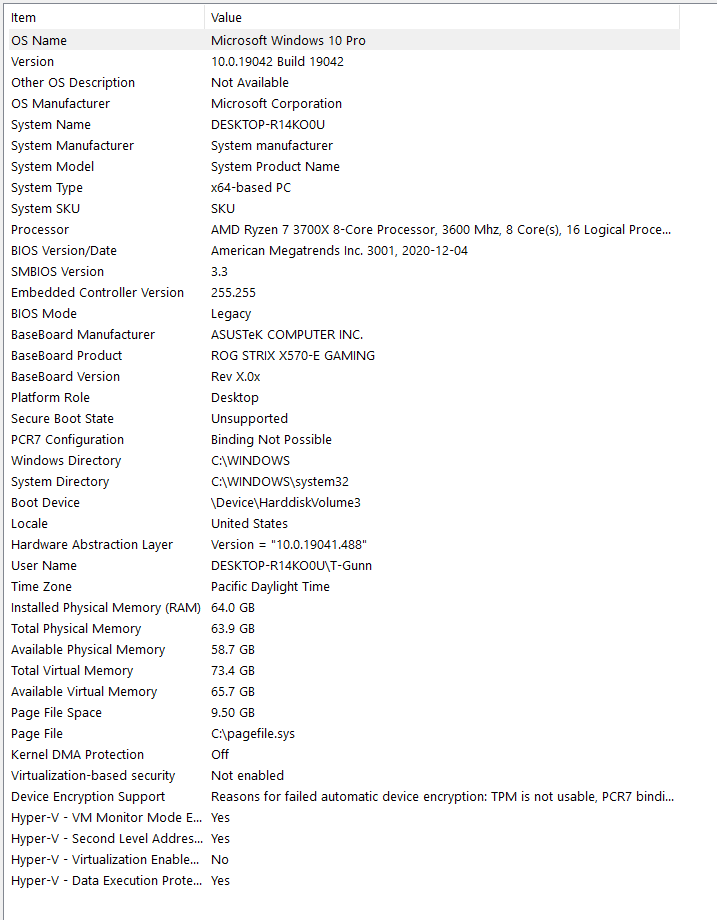 A bios update may help yours is from last year

Alan J T said:
A bios update may help yours is from last year
Click to expand...

Yeah, that's definitely going to be my next troubleshooting step. When I first got the board, I had only updated enough to ensure Zen 2/3 support as I'm currently waiting on a 59xx series proc; I only picked up this 3700x as an interim solution just to get my system built lol. Bios updates always sketch me out though so I'm going to wait until I get a secondary workstation setup so I'm not dependent on my main rig for my work/job.

Will circle back with the results once complete.

Curious.... Have you resolved this? I am having the same issue with this video card and Crosshair VIII Hero w/5950

Phoenixcorvu154802db said:
Curious.... Have you resolved this? I am having the same issue with this video card and Crosshair VIII Hero w/5950
Click to expand...

As an update I've updated the vbios to the most current revision to no effect.

I just upgraded my proc from the 3700x to a 5950x and can confirm that it did not have any impact on the issue.
P

Yeah. Two days ago mine fully went out on me. So it is goung to be RMA'ed out. Hopefully this doesnt happen to your card... or ot does and your card is in warranty can be swapped out.

oh [***CENSORED***] really? How did it go down? Did the issue get worse before she gave out?

Im wondering if I should open a support ticket to atleast get it on their radar...

If its not too much trouble, please circle back and let me know how your RMA goes!

Yeah... I would get artifacting, medium sized pink and green pixeling through out the display, randomly under different conditions even on the lowest of settings.

Video would crash to black, but still could shutdown by Alt+Ctrl+Del, tab x7, enter, down then enter... Power up and video would be back and roulette from there if it would happen again. Ran load tests using 2 differebt programs at the same time while playing a game, streaming music and playing two 4k videos... Couldn't recreate it. Started a low graphic game and crash.

Updated drivers, vbios and motherboard's bios. Nothing. Weeks later no video on startup from off. Swapped with a lower card and had video. Waiting on the replacement 6800xt

That sounds awful.... Thankfully mine hasn't progressed beyond the reboot issue but I do have a stand-in card if the worst were to happen and I need to ship it off.

When you were talking to support, did they give the impression that this was a known issue to a certain degree; Either the restart issue or it progressing to artifact'ing and, ultimately, a dead GPU?

There doesn't seem to be many others, if any, that are talking about this issue online so im curious if this is something MSI Support had/has encountered before or if we're just two outliers who, through the magic of the internet, managed to find each other hahaha.

Re-plumbed my liquid cooling loop to accommodate installing the card directly into the PCIE slot. Unfortunately removing the riser cable from the equation didn't have any impact on the issue. Still have no video after rebooting.

Circled back to support with my findings who advised me to submit an RMA request.