Recently, many laptop brands have released diverse laptops with NVIDIA RTX 30 series Ampere graphics. To understand which RTX30 laptop is more suitable for gamers among different options, it’s important to first know what affects performance and functions that could actually benefit gamers.

Resizable BAR Technology
Resizable BAR is one of the new technologies that can further support gamers by adding extra 5-10% boost in frame-per-second (FPS). Resizable BAR is an advanced PCI-Express technology, which enables the CPU to fully access the entire GPU VRAM. And if multiple requests are made, transfers can occur concurrently, rather than queuing. Worth noting, MSI is the first brand that integrates the “Resizable BAR Technology” into the whole NVIDIA GeForce RTX 30 Series laptops, including GS Series/GE Series/GP Series/GF Series/Creator 15.
*Benchmark with NVIDIA ready Driver Ver.461.23.
*Result will vary by different specification and system configuration.

Top-Tier GPU needs wider PCIe bandwidth
The new-released NVIDIA Ampere GPU is strengthened to become the top-tier weapon in the gaming battlefield. To reach its peak performance, PCIe bandwidth plays the essential part in data transition. By PCIe Gen3 x16, the performance of RTX30 GPU won’t be restricted, and meets maximized FPS during the games. PCIe could be recognized as highway delivering data between CPU and GPU. If the bandwidth isn’t wide enough to deal with massive data, it will lead to performance drop, which could often be found in top-grade GPU. PCIe Gen3 x16 could be seen as a savior that provides much wider PCIe bandwidth for premium graphics, and is now applied across MSI RTX30 laptop series. 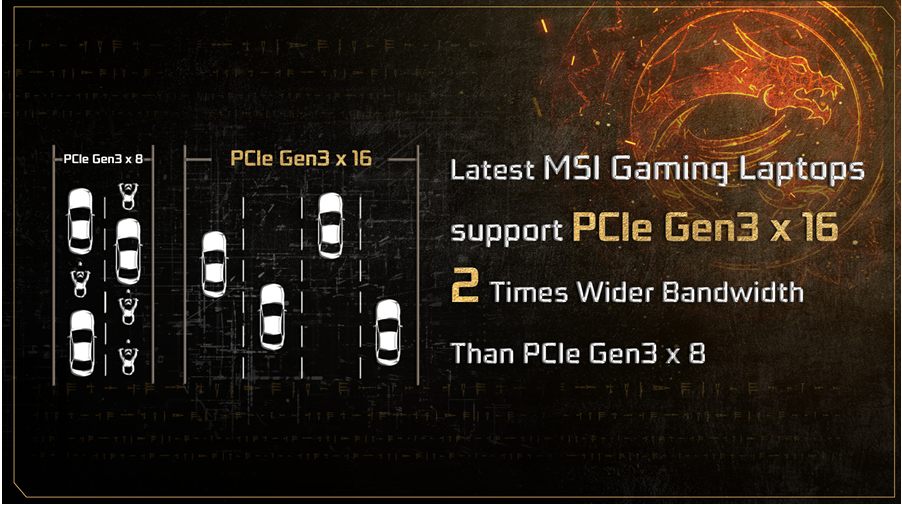 High CPU Frequency will unleash full potential of GPU
High CPU frequency is regarded as a necessary requirement for gaming laptops. Though GPU plays a significant role in processing graphics, CPU is likewise important in calculating the physical objects in games. Its performance is hugely impacted by frequency, which will influence the result of FPS while gaming.
In addition, it’s more crucial that high-end GPU is paired with high frequency CPU to become matched and balanced. When CPU cannot keep up with the processing speed of GPU, system will not be able to release the full graphic potential. MSI GE Series and MSI GS66 are perfect examples combining RTX 3080 with Core i9 CPU supporting frequency up to 5.3GHz, and other MSI gaming series equipped with i7 processors also commonly reaches over 5GHz, which could completely unleash its beast-like power and optimize the gaming experience.

Increase pivotal Expansion capability with Thunderbolt™
If you’re a business professional, content creator, gamer, or just want to simplify your 4K workspace, supreme connectivity can make all these works much faster and simpler. Thunderbolt™, a unique technology designed by Intel, which is exclusively only supporting platforms powered by the Intel CPU. Outfitted with the Thunderbolt™, the sleek but powerful laptops, MSI GS66, and Stealth 15M can now provide an incredible 40Gbps ultra-high transfer speed and up to 100-watt input. What does 40Gbps mean? It means transferring a 4K movie just needs in less than 30 seconds! 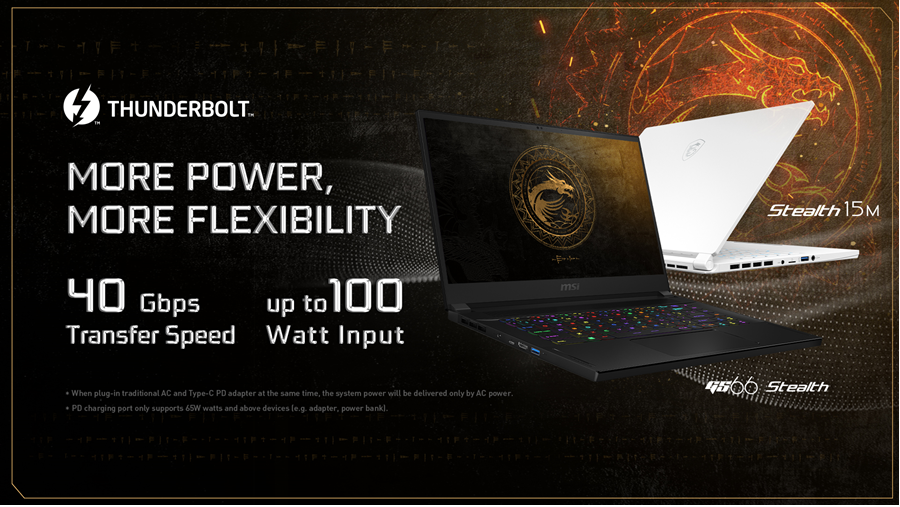 The PCIe Gen3 x16 bandwidth is an important factor to make sure the GPU could provide the full performance.
D

cpsoho said:
The PCIe Gen3 x16 bandwidth is an important factor to make sure the GPU could provide the full performance.
Click to expand...