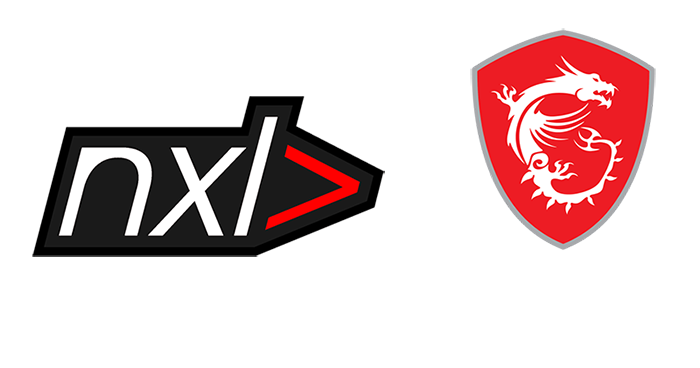 Founded since 2005, and based in BSD City, Team NXL is an energetic eSports team and is involved actively in many eSports games, such as Arena Of Valor; Mobile Legends; Counter-Strike: Global Offensive; Hearthstone; DOTA 2; FIFA 19, etc.. 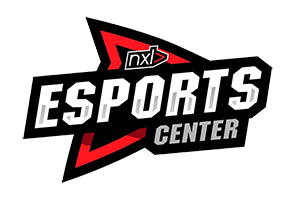 Lots of thrills to the newly opened NXL eSports Center, where provides gamers facilities to practice games, to simulate contests, to share experiences. NXL eSports Center is the exhibition of Team NXL, you may always learn more about Team NXL here. Besides, it is also a place for fans to get close to and to have interacts with players and angels.

1. Tell us the history of Team NXL and the achievements Team NXL has made. Where does the name Team NXL come from? What outstanding characteristics and significance Team NXL has?

NXL consists of a number of young people who met at one of internet cafes in 2005. They had a mission to join the tournament and try to become the number 1 champion. The idea of NXL?s name was actually come from one of our players called Anang a.k.a NxL. Heart. He wanted to bring the amateur team to the next level, which you may have noticed that NXL team was short for Next Level.

As for the achievements, there is one team member that we wanted to highlight here, whose name is Hendry Handisurya, commonly known as Joe. He is a veteran eSports player in Indonesian eSports world. He is famous for always won 1st place in every game that he participated, such as Warcraft III, Dota 1, Starcraft, and Hearthstone. Just like Richard, Joe also has entered International level. With Joe?s latest achievements in joining 2018 Asian games and Heartstone Masters. He is qualified for the main event in Las Vegas after defeating former Hearthstone World Champion Ostkaka in the final with score 2-1.

The main characteristics that our team has are passion, dedication, and never give up. We have always done our best and let God do the rest. 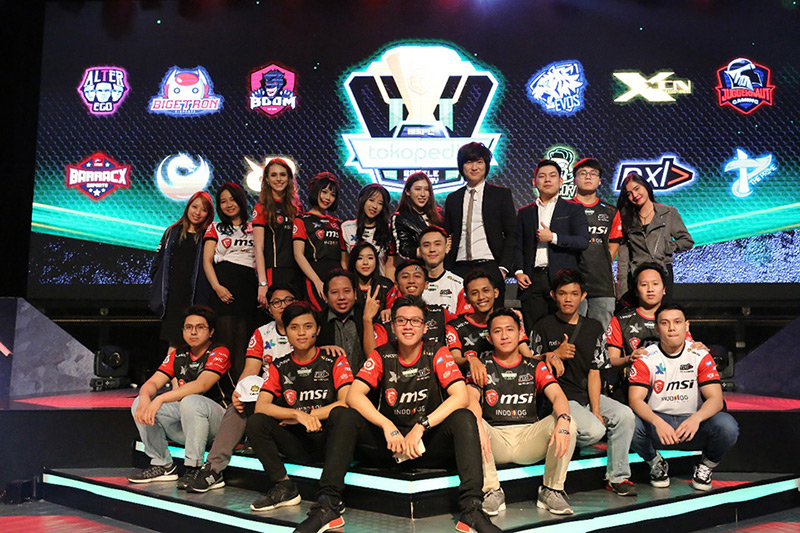 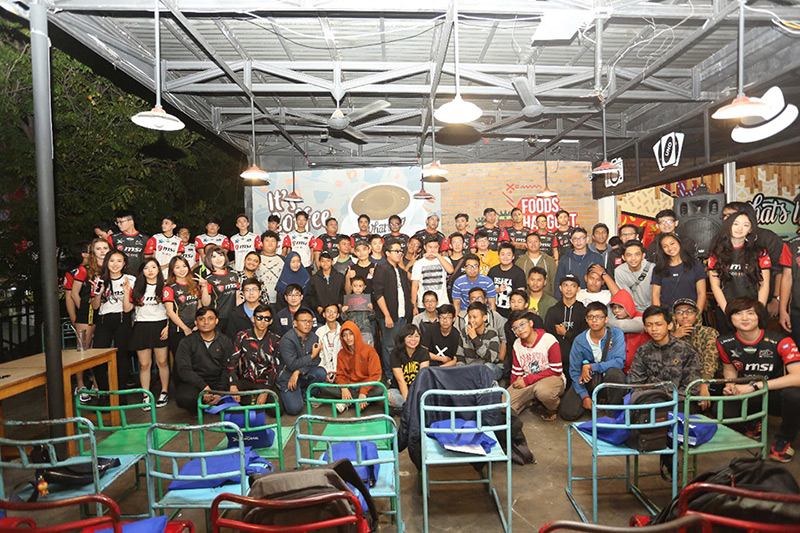 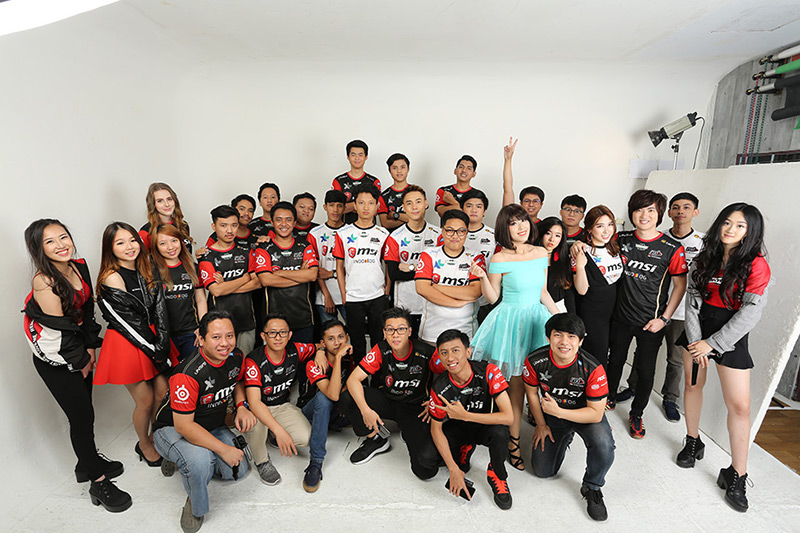 2. Richard Permana, the keyman of Team NXL.  Please tell us about his achievement of being a gamer and his importance to Team NXL. In addition to a gamer, Richard is also a leader of Team NXL, what ambition and plan he has to lead Team NXL to a higher next level?

After being in this industry since 2005 until now, Richard has obtained hundreds of achievements both locally and internationally through the loyalty and discipline to Counter Strike games. Richard is the one who always handled everything by himself, from looking for sponsors, becoming a leader in games, making and selling jersey and merchandise, making relations with the media, and holding meet and greet event with fans. In other words, he needed to do all the eSports related work you can think of from A to Z in person. It was not until he got a sponsor and was able to hire a number of staff help with the work within NXL team that he was able to take a breath and delegate some tasks to other team members. Now, Richard aims to look for more investors to support his team so as to realize NXL?s mission, ambition, and ideals gradually. 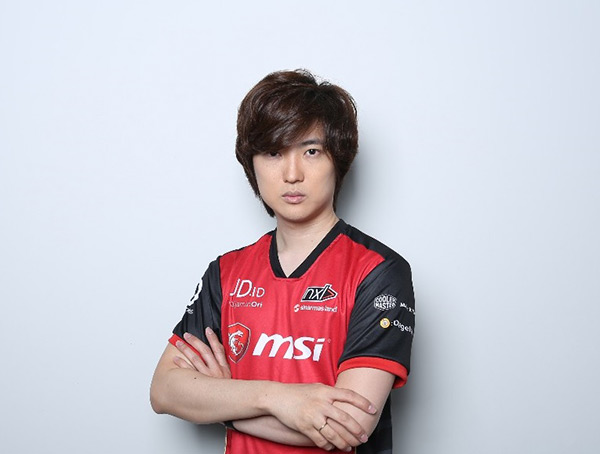 3. Please introduce what game teams Team NXL has currently. Tell us the members of each team and the roles they play in the team.
Our current divisions are Hearthstone, CS:GO, Mobile Legends, and PUBG Mobile Ladies. For NXL GS:GO division is led by Vega ?Soifong? Tanaka, who has long served with Richard at NXL and is now in charge of being a Sniper and In-game leader; Richard himself as a Lurker; Kennedy ?Fragile? Buntoro, a smart young player, who is experienced in the competitions as a role of Entry Fraggers. In addition, there is a new player, Rae ?Recz? Immanuel, who has big goals and talent that is needed by the team; his role is Entry Fraggers. The last one is Lukas ?Sharky? Bagus, a player who was once an In-game leader in his previous team. He takes a role as Support in the team. 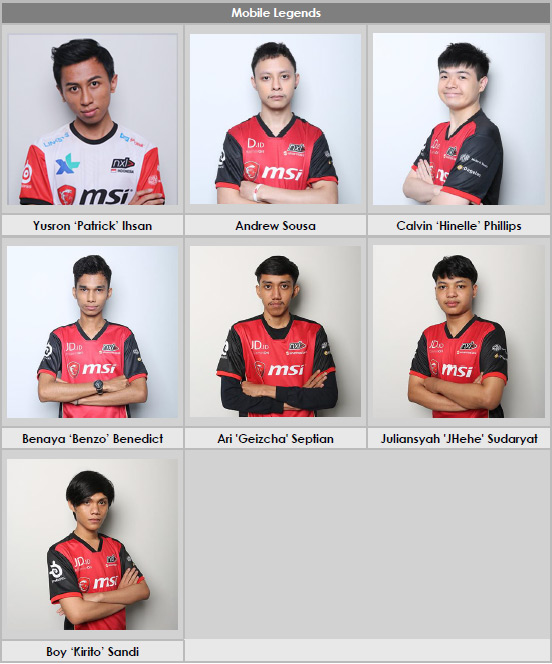 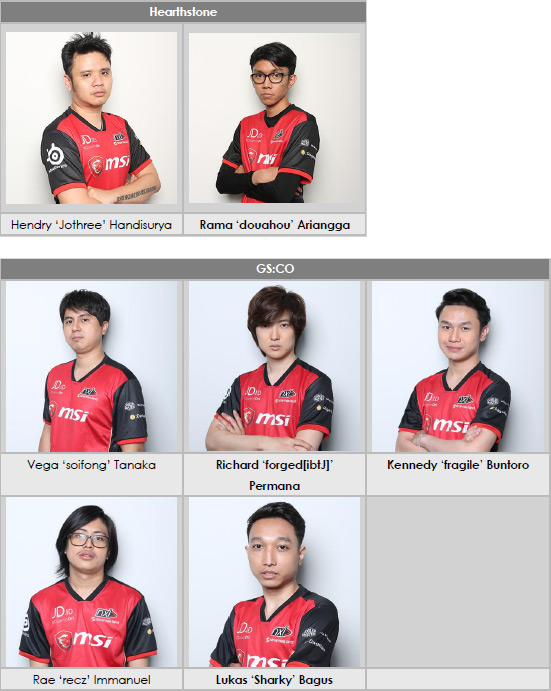 4. Tell us about Team NXL?s achievements. Which match impressed Team NXL the most, any unforgettable story happened during the tournament?
2013 Asian Cyber Games, is one from many matches that is worth memorizing for NXL team. We competed in Beijing Shinjinshian Stadium using MSI Laptops, and we managed to become 1st place during the competition. The moment of raising the Indonesian Red and White Flag on stage will never be forgotten, coupled with obstacles such as very cold weather and all day long tournament from 8am until 2am in the next day. Other achievements that we are proud of are the fact that NXL CS:GO team could never be defeated even once at the local competitions, held during the period of 2012 ? 2016, as well as at offline competitions in Southeast Asia during 2013 ? 2015. We are so proud to swing the Indonesian Flag as a champion in the international competitions. Another special moments are when NXL team managed to break into CS:GO Minor in 2016 and managed to obtain important Medal for Indonesia through Hendry Handisurya?s lunge for Hearthstone game in 2018. We remembered that in the early round, Hendry immediately met with the strongest enemy of Thailand. He could have failed but he managed to beat the tough opponent and drove to the final. In the end, he won a second place in the 2018 Asian Games Main Standings. 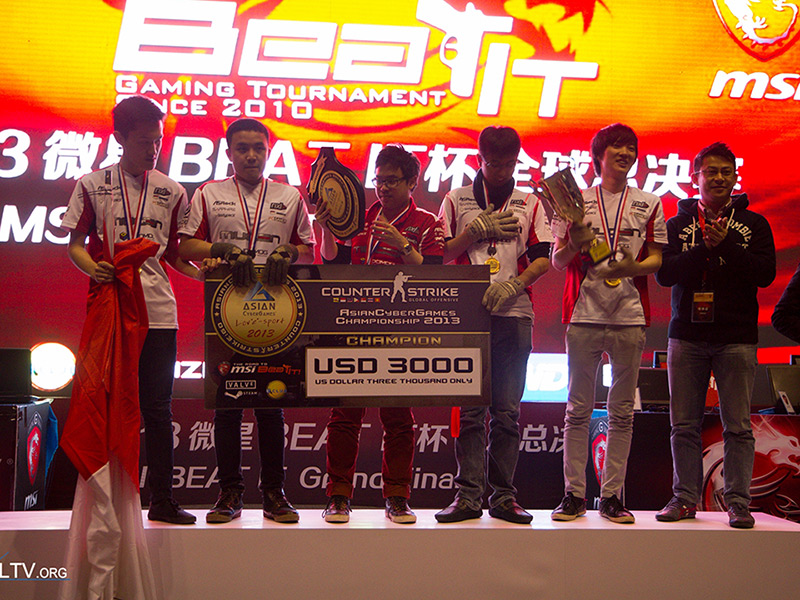 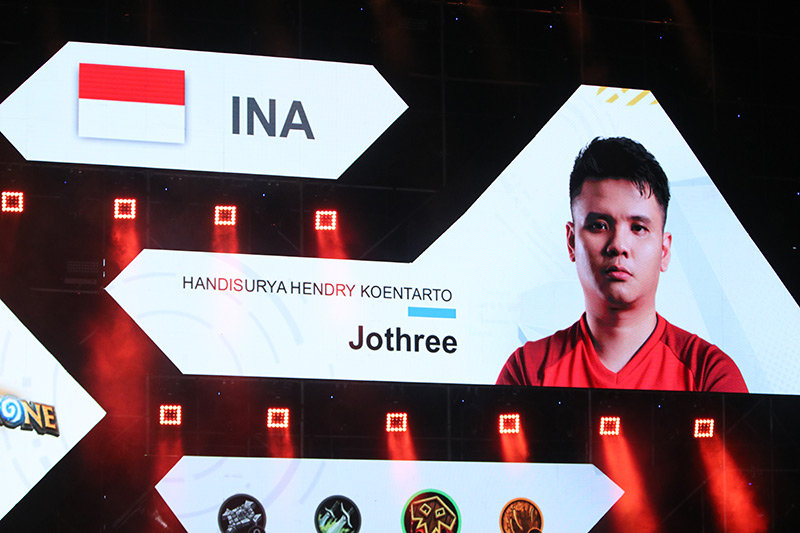 5. In 2019, which specific tournament Team NXL is going to focus on? What is the goal Team NXL has?
In 2019, we will focus on Hearthstone, CS:GO, Mobile Legends, and then look for Free Fire team, PUBG Mobile team, and it is also possible for Apex Legends and R6. The goals that NXL Team
pursue in the future are to make CS:GO team be able to get back in into CS:GO Minor and to have our Heartstone team to be the world championship.

6. We find that there is an eye-catching existence of NXL Angels, please introduce the members.  What do they do in Team NXL? Do they play games? The plan they have in 2019?
Any interesting story about how NXL Angels getting along with other gamers and fans.

NXL Angels are served as our talent influencers. Some are also streamers or game players, whether it is PC games or Mobile games. And some are really good at the game field. There is Yola Valery, who has the most fans; Karen who is good at playing games; Djihan is very popular in Tiktok Apps; Marvella is very good at playing FPS games on PC; Anisa Rahels, our newly joined member, is very good at PUBG Mobile and Mobile Legends. Our plan is still the same, they are going to be the fan liaison to the team, and to tighten the relationship between team and public. 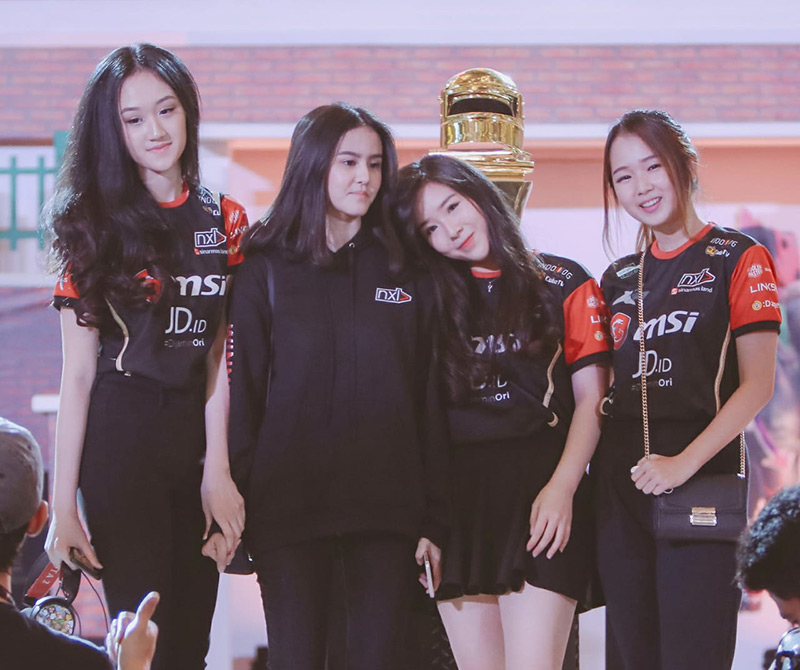 7. Congrats to Hendry Handisurya for winning the silver medal of 2018 Asian Games eSports from Hearthstone game. Please share with us what memorable moments or difficulties he has during his eSports career? What is the meaning of GAMING to him? What goal he has in Team NXL?
A definite memorable moment is when cheering for Indonesia Asian Games, and the difficulties of course when you have to sacrifice the time with the closest people for training and competing in the match. Nowadays gaming is something that you do not only as a hobby, but also a career. My goal is to put NXL Team and Indonesia on the map as a world champion.

8. Please share the experience of the partnership with MSI, and what effects and assists that MSI has given to Team NXL? What does Team NXL expect for the future cooperation between each other?
Partnership with MSI is one of the dream come true for NXL team. The freedom they gave us to choose the hardware that the team needs is very helpful for us. It is crucial to provide our athletes with the latest, high-end and reliable hardware that fits the team?s demands because they can channel their skills and develop their talents to earn the best achievements. NXL expects to purchase personal gaming laptops for each of our athletes since we will have more teams in the future.

9. As a pioneer of Indonesian eSports industry, any suggestions for all the Indonesian youth gamers that are intend to go pro.
Never be afraid and never give up easily if you want or already have a career in Indonesian E-sports Industry, you must have enough talent needed by this industry, thus giving its own color to the progress of Indonesia E-sports.

10. Anything to say to old and new friends to Team NXL?
We would like to thank you for your enormous support all this time. Because of you guys, we are still moving around to show the positive side of E-sports in Indonesia, as well as trying to continue to earn achievements for Indonesia E-sports. And we would like to say hi to our new friends. Also, we want to invite all of you to come to NXL eSports Center to get acquainted directly with our athletes who are practicing and competing. Or, you can simply just sit, relax or even play games together with us. You are also encouraged to come and take photos or selfies with our various unique memorabilia. Looking forward to seeing you there!.