My 12900K is 4900Mhz default clock
4800Mhz look correct default clocks,boost clock works as below,although I did not look at your attachment

If under Creator Genie CPU is selected = 4.80GHz

I see you have already enabled Creator Genie, because it shows 4.80 GHz in your BIOS screenshot. This was a mistake.

First i'll explain the number in your BIOS. It does not show the maximum turbo frequency. It shows the base frequency, the minimum guaranteed frequency. This number is irrelevant, as the CPU will boost to higher frequencies as soon as it needs to. So if you don't enable Creator Genie (which you shouldn't, as i will explain soon), then that number should show 3.60 GHz. Again, it doesn't matter, in Windows the CPU will boost much higher, you don't need Creator Genie for that.

Creator Genie should be similar to Game Boost on other MSI boards. I would avoid this function completely. It is overclocking, and it is the worst overclocking there is, for several reasons. It will apply too much voltage everywhere, because MSI wanted to make it work with all types of CPUs of varying quality. So they added huge safety margins for the VCore (CPU voltage), which is in no way adapted to your specific CPU and way too high. This makes power consumption and heat production skyrocket, without improving performance anywhere near as much. It also doesn't take into account the best way to utilize the turbo modes. Any automatic overclocking that is not optimized to your specific CPU is bad, but this method especially so.

If you want a faster CPU, buy a faster CPU. These latest Intel CPUs use 99% of their capabilities by default, with all the different turbo modes. To get the last 1%, you have to increase the voltage too much. The CPUs are already highly binned (pre-selected) by Intel according to their capabilities. So you can't turn a 12700K into a 12900K, the 12900K was binned much more carefully by Intel, and then pushed much harder. If you attempt something like that with an OC function, the efficiency will suffer dramatically, because it needs way more voltage and power. So just leave it as it is, you cannot do better. The days of CPU overclocking are over.

Nowadays you concentrate more on the RAM. Mostly just up to DDR4-3600 with 11th gen and 12th gen Intel, because of Gear2 mode, but that's another topic, see signature. Speaking of RAM, yours is set to DDR4-2666, so either you don't have XMP enabled or you have quite an old kit of RAM. This is a real impact on performance, not the CPU Speed shown there.

Anyway, as i explained in the beginning, the CPU frequency in the BIOS has nothing to do with what happens in Windows later under load. If you disable Creator Genie or reset your BIOS to default settings, it will show 3.60 GHz there, and in Windows it can easily go towards 5 GHz despite that. 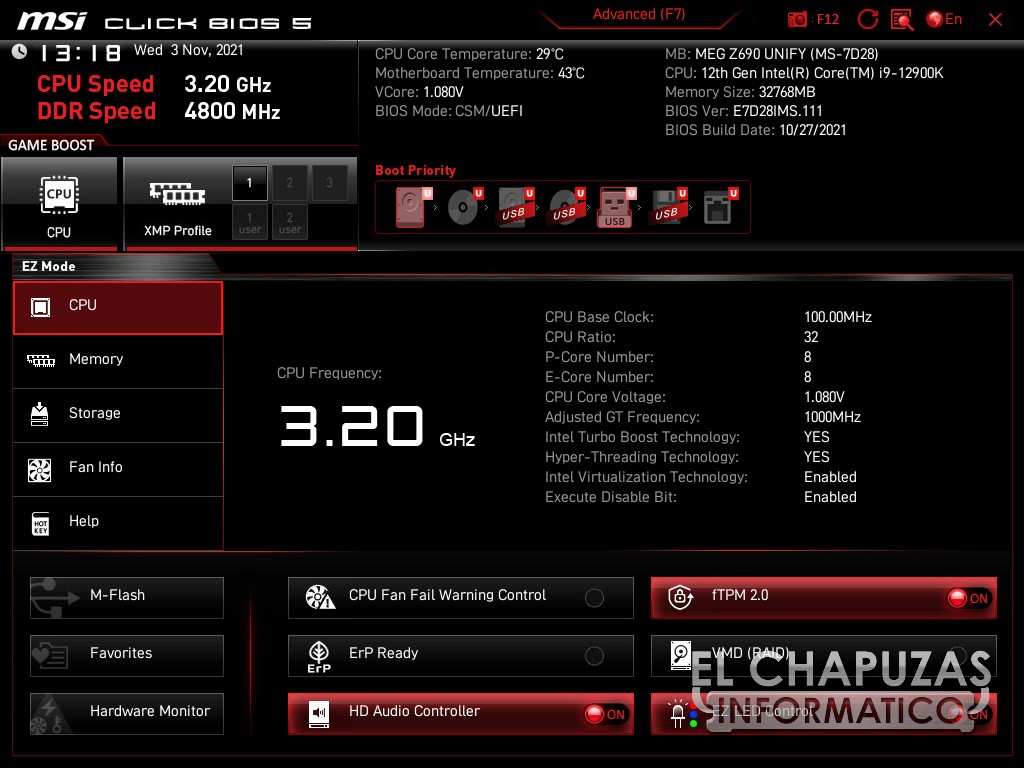 Look closely: CPU Speed 3.20 GHz. This is the base clock of the 12900K. Don't ask me why it's lower than the 12700K, but as i said, it doesn't matter at all. The real frequency later in Windows is completely dynamic, changing all the time for all the cores, and much higher than the base frequency when there is load. So, turn off the Creator Genie / Game Boost and let the CPU work normally.
Last edited: Dec 3, 2021
M

Super thank you @citay I will try your advice, unfortunately my new ram has not yet arrived 32gb 3600 cl16.
XMP is well activated
I have the LAN module which stays on (flashing on the RJ45 port) when the pc is off, is it possible to turn it off?

minusse015b602e5 said:
Super thank you @citay I will try your advice, unfortunately my new ram has not yet arrived 32gb 3600 cl16.
XMP is well activated
I have the LAN module which stays on (flashing on the RJ45 port) when the pc is off, is it possible to turn it off?
Click to expand...